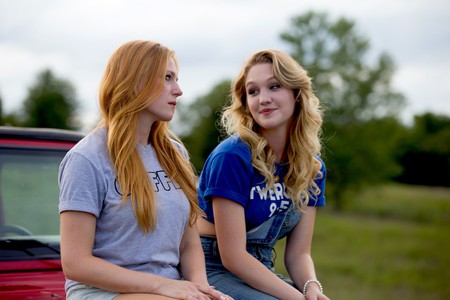 In the hilarious road comedy Different Flowers, Emma Bell stars as a jittery bride and Hope Lauren is the wild child sister who leads her astray—and toward self-empowerment.

Written and directed by Morgan Dameron, Different Flowers is a savvy twentysomething take on Thelma and Louise—minus the killing and the death plunge.

In contrast to Jim Jarmusch’s road movie Broken Flowers, Different Flowers is about women who are growing, not women left by a man to wither spiritually. In contrast to Rough Night and Girls Trip, Different Flowers is a loose and laid-back indie that insouciantly asserts young women’s rights to put ambition over a confining marriage, to hook up spontaneously with good-looking dudes, and to work their way through their conflicts on their own terms. It’s also about an irreplaceable bond.

Uptight Millie (Emma Bell, The Walking Dead) is moments from following her controlling, materialistic mom’s wish that she and her drone of a long-time fiancé, Charlie (Sterling Knight), step up for a lavender-hued Kansas City wedding. Suddenly, Millie starts to have doubts.

Her carefree sister Emma (Lauren, Supergirl), who has a temperamental crimson jeep called Albert and a DUI license problem, appears to be irresponsible and selfish in suggesting she drive Millie away from the church in the nick of time. But Emma isn’t just wild, she’s wise—and she understands Millie’s emotions better than anyone else.

Meandering through Kansas and Missouri, the duo form a sisterhood of traveling tees from Emma’s “failed T-shirts for Millennials business,” the garments adorned with thoughtful slogans like “Twerking From 9-5,” “Waffles First,” and “DTF” (the latter nixed by prudish Millie). 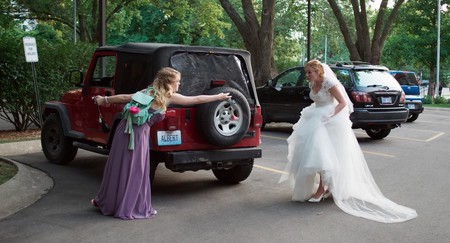 They head to the farm house of their grandmother (Shelley Long), who’s still helping to mop up the mess of the canceled nuptials in K.C.. Propelled by Springtime Carnivore’s gorgeous song “Face in the Moon,” the girls drop by en route at some of the region’s funnest landmarks, including the World’s Largest Ball of Twine in Cawker City, KS, and the World’s Largest Goose in Sumner, MO.

They dance in a meadow and drift through a sunflower plantation. They sing Patsy Cline. An unremarked-upon rainbow graces a horizon. In a gas station store room, man-magnet Emma gets hot and heavy with the hunky attendant (Rob Mayes): see the clip above.

Because old resentments surface, Millie and Emma bicker—the antagonism simply part of the baggage they have to discard as they get close after a fallow patch in their relationship. Millie slut-shames Emma; Emma shames Millie for being un-slutty. It seems fair. 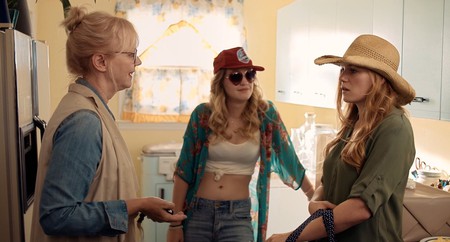 Given a stern talking-to by Grandma, the girls gradually merge their values. Millie lets her hair down, literally, while also contemplating entering law school, which Charlie would never have sanctioned. Emma starts to think the gas station guy has serious boyfriend potential.

Most important, each woman gets to do what she wants while rediscovering that her sister is the best friend she’ll ever have. Dameron puts her main sentiment in Grandma’s mouth when she has her tell the sisters, “You have someone to be different with.” Shelley Long makes it sound like an answer to everything.