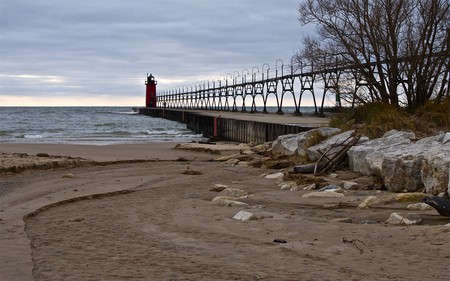 Sharing its geography and history with Mississippi and Tennessee, Southaven nevertheless has a community of restaurants that make it stand out on its own. From fresh seafood and Italian fare to barbecue and Mexican with a twist, Southaven’s dining scene has a warm, welcoming and family oriented attitude typified by Southern hospitality sure to make any diner feel at home. Here are 10 of the best cultural restaurants in Southaven, Mississippi. 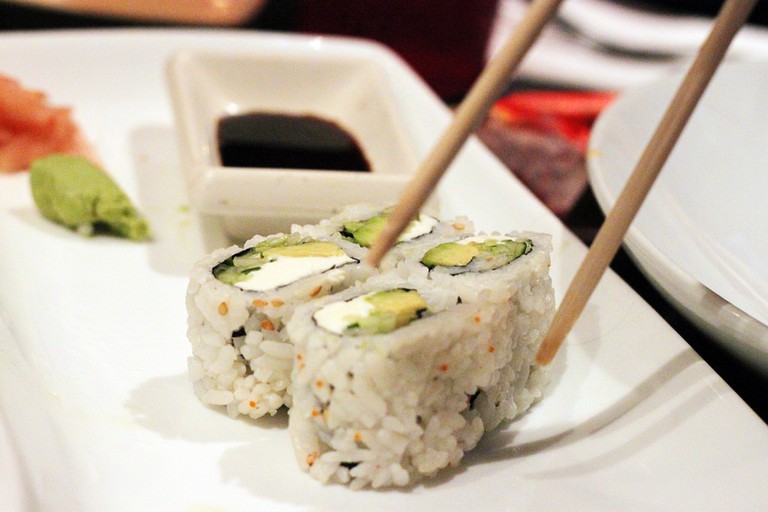 Kono Hibachi | ©Ginny
Sleek wood floors, shoji-style windows and an open kitchen all under a ceiling a hanging peach blossoms give Naru – a contemporary Japanese restaurant – an authentically Eastern chic feel. Established with the mission of bringing upscale Japanese dining to suburban Southaven, Naru specializes in sushi and hibachi-inspired cuisine typified by long-standing culinary traditions and updated with a highly modern style of presentation. Appetizers include gyoza or beef tataki with ponzu, hot sauce, scallion and sesame seeds, while entrees include crispy duck glazed with a raspberry hoisin sauce and served with grilled French vegetables – perfectly complemented by Haru’s extensive selection of wines, sakes and creative, contemporary cocktails. 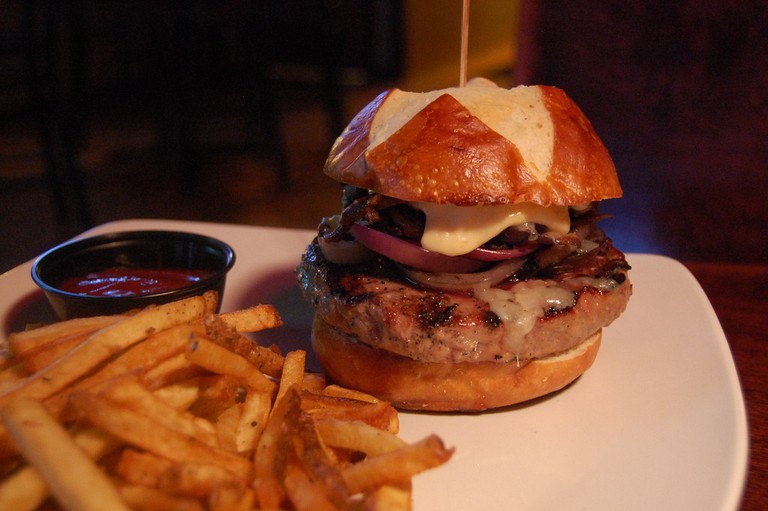 burger | ©stu_spivack
Dale’s Restaurant is a long-standing Southaven tradition established in 1966 by owners Dale and Lillie Graham. Typified by hearty home cooking and a family-oriented atmosphere, the restaurant has a local and loyal customer base who love its fresh produce and chargrilled steaks and burgers. Dale’s all-American menu features appetizers like Lillie’s fried green tomatoes – a Southern classic of fresh tomato slices battered and deep-fried served with Dale’s tangy tomato sauce. Mains include the Southaven burger topped with onions, green peppers and sautéed mushrooms or, if you dare, the 18 ounce Porterhouse steak. Desserts include classic comfort food like pecan pie and chocolate chip brownies. 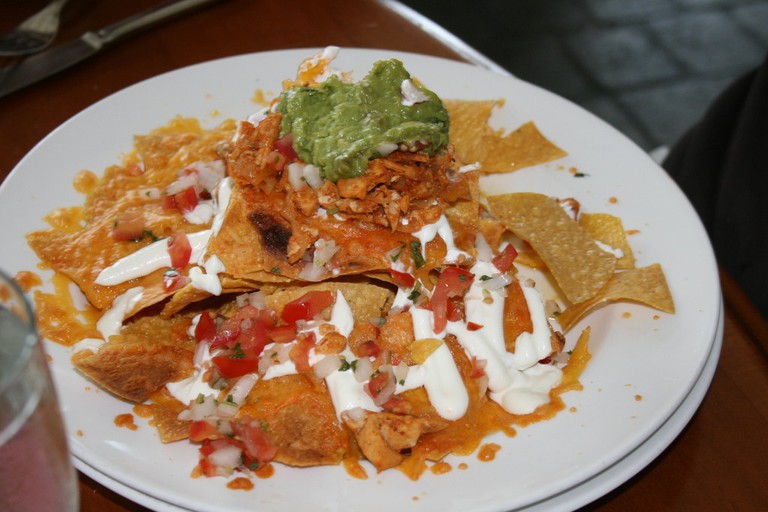 chicken nachos | ©Jeff Sandquist
Set up by a group of friends who wanted to bring something different to Southaven’s dining scene, Maria’s Cantina serves perhaps not what would be identified as traditional, authentic or expected Mexican, but what the owners call ‘Mexican with a twist’. The restaurant’s tantalizing appetizers feature chicken nachos flavored with lime and tequila or the shrimp and mango ceviche, while entrees include the mahi mahi veracruzano – a filet of mahi topped with an olive, tomato and caper sauce served on a bed of black beans, cilantro-lime rice and grilled vegetables. 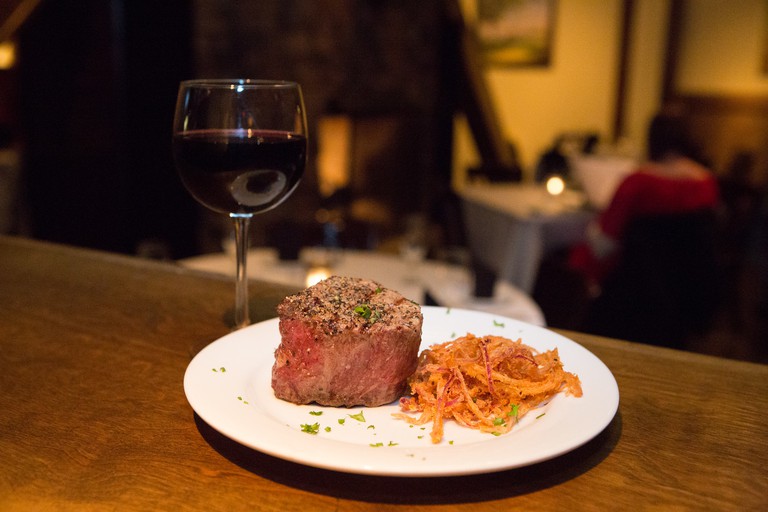 Dinner display | ©Mesquite Chop House
Mesquite Chop House, a local group of restaurants with two Tennessee-based sister branches in Memphis and Germantown, is a carnivore-oriented restaurant with a difference. Using Mesquite wood, which generates very hot flames perfect for grilling meat, the restaurant serves impeccably grilled prime steaks and chops with unique and tasty sides like sautéed asparagus and sweet potato fries. With its dominating dark wood bar, subdued chandelier lighting and exposed brick detail, Mesquite Chop House exudes a classically warm and Southern ambiance, perfect for enjoying an appetizer of broiled gulf oysters in the half shell with a lemon-garlic beurre blanc. For an entrée go for one of the restaurant’s speciality cuts, like its New Zealand rack of lamb marinated in garlic and rosemary and served with a blueberry demi-glace and wild mushroom risotto. 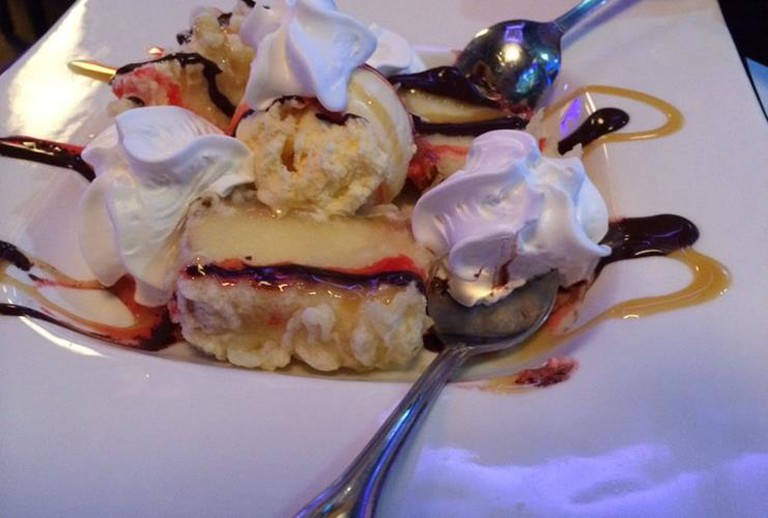 Desert | ©Urban Japanese Fusion Cuisine
Serving modern Japanese fare in an urban setting, Urban Japanese Fusion Cuisine has a menu that encompasses cuisines including Asian fusion, sushi, traditional Japanese and Thai. Opened in November of 2013, the restaurant’s interior is as modern as its tasty fare, with black leather seats, stone walls, exposed ductwork and elegant, contemporary lighting that work to give it a chic industrial feel, while an open kitchen and a fish tank provide extra entertainment. Try a sushi appetizer like rainbow sashimi – a colourful starter of thinly sliced sashimi with jalapenos, asparagus and yuzu sauce – followed by a Thai-inspired entrée of mi korb – fried crispy egg noodles with stir-fried mushrooms, broccoli, tomato, scallion, carrot, onion and pineapple.

Interstate Barbecue is the birthplace of the world-famous Neely’s barbecue dynasty which, since opening its doors 15 years ago, has expanded to include restaurants owned by other Neely family members in New York. Founded by James L. Neely, the restaurant boasts some of the best barbecue in the South and was once hailed by USA Today as the best place in America to get a pork barbecue sandwich. Neely uses a specialized barbecue pit whereby meat is slowly cooked for around five hours over hickory wood, and often accompanied by his secret sauce – a highly guarded secret recipe that has become something of a local legend. To get a real taste of Interstate Barbecue, order the sampler platter which includes pork and beef ribs, sausage links, beef brisket, pork shoulder, barbecue spaghetti, beans, slaw and bread. 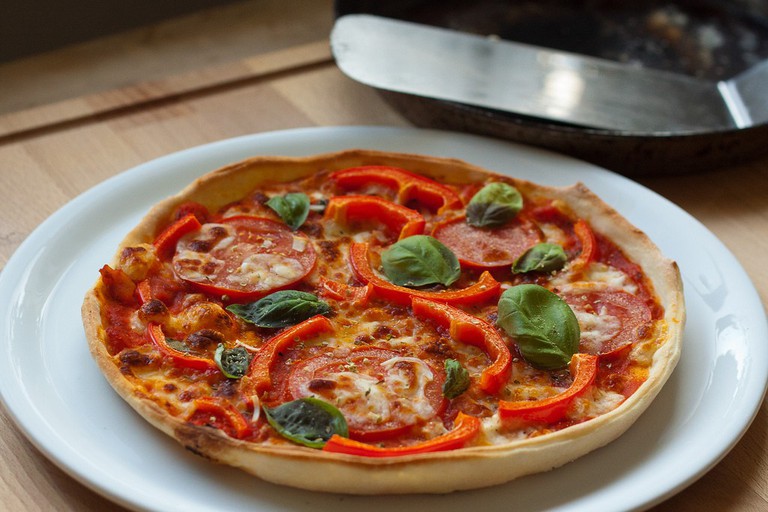 Pizza | ©Pierre Wolfer
Cooking up authentic and affordable Italian fare, Avellino’s is a popular Southaven restaurant that has been a tradition in northern Mississippi for over 30 years. Situated in a handy central Southaven location, Avellino’s specializes in pizza, pasta, sub sandwiches and salads, and its interior includes quaint checked tablecloths, friendly waiting staff and a family-oriented atmosphere which give the restaurant a homely Italian kitchen feel. Choose from plenty of dishes typical of hearty Italian cuisine like lasagne served with a fresh side salad and homemade garlic bread, or a delicious calzone pizza with fillings of your choice. Alternatively, try a sub sandwich, like its top-selling Italian hoagie crammed with ham, pepperoni, Genoa salami, provolone cheese, onions and banana peppers with lettuce, tomato and Avellino’s signature Italian dressing.
Give us feedback