This Island Disappeared Into the Chesapeake Bay 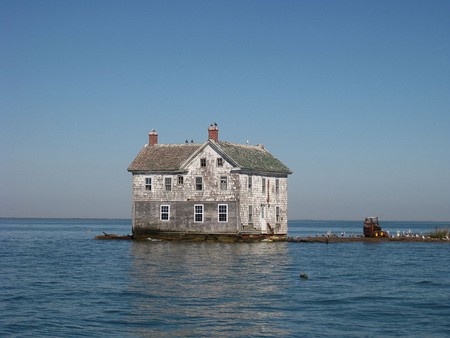 With sea-level rise, we know that some of our favorite beaches and islands are at risk of disappearing. Holland Island, located in the Chesapeake Bay, was once a thriving place, but in 2010, the last house on the island collapsed into the water. Read more about the history of the island and how it disappeared.

The island between Tangier Sound and the Chesapeake Bay off the coast of Maryland’s Eastern Shore was first settled in the 1600s. Then, the island was five miles (eight kilometers) long and had room for houses and a little town. The community on the island grew, supported mainly by watermen who dredged oysters in the bay. At one point, the island had 60 homes that housed 360 people, a social hall, church, school, and even a baseball team that traveled to other islands to compete. The island had its peak in about 1910, but with a declining oyster population and changes to the industry, islanders packed up their belongings, sometimes even their homes, and moved to the Eastern Shore.

The island has actually been steadily eroding for hundreds of thousands of years. The bedrock under the Chesapeake Bay region has been sinking since the ice age, and Holland Island was made of clay and silt. These factors made the island more susceptible to storms and tides, which eroded the land, causing the island to disappear. But with climate change, the waters have also been rising. In the Chesapeake Bay, water levels rose about a foot (20.5 centimeters) during the 1900s, which was about twice as fast as in the previous several thousand years. The southern end of Holland Island remains a grassy, marshy area that will also sink into the bay soon.

The last house on Holland Island was built in about 1888, and from 1995 to 2010, one man tried to keep it from facing the fate of the rest of the island. But after 15 years, nature was too powerful, and the house collapsed into the Chesapeake Bay in 2010. The lone Victorian-style house rising out of the water had become a little bit of a celebrity though. Artist Lynn Tomlinson told the story of the house in lyrics set to music by the duo Anna & Elizabeth. The video that Tomlinson and Anna & Elizabeth made is truly mesmerizing.