The Most Beautiful Towns in Maryland, USA 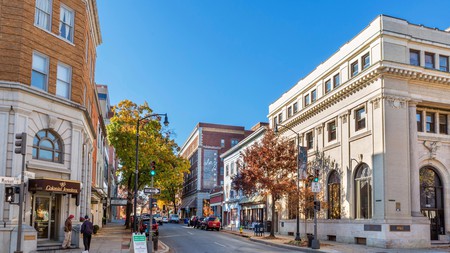 A perfect blend of old and new, the beautiful Frederick, Maryland, has something for everyone | © Ian Dagnall / Alamy Stock Photo

As a small East Coast state, Maryland has many scenic landscapes and areas of natural beauty. Here, Culture Trip has curated a list of the state’s most picturesque towns – from waterfront gems to inland charmers.

On the Chesapeake & Delaware Canal, Chesapeake City is an idyllic little town filled with history and charm. It lies right on the edge of the waterfront and is bordered by trees and fields, which turn a lush green or a beautifully burnished bronze and orange according to the season, filling the town with color and warmth. Chesapeake itself is largely unspoiled, having retained an incredible proportion of its 19th-century buildings and houses, many of which have been converted into inns and restaurants. Meanwhile, the local museum is perfect for experiencing the town’s heritage and culture.

Voted America’s Coolest Small Town in 2014 by Budget Travel, Berlin is one of Maryland’s most charming and vibrant towns. Famous for depicting the fictional town of Hale in the 1999 film Runaway Bride, it is just as quaint in reality as it is on screen. The entire downtown area (Berlin Commercial District) is on the National Register of Historic Places, with many buildings and traditional houses dating from the Federal, Victorian and early-20th-century periods. They are interspersed with sycamores, poplars and bountiful flowers, lending the area a beautiful and distinctive aesthetic. 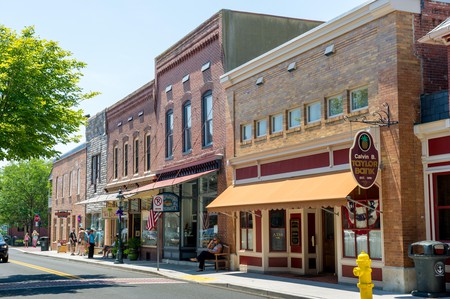 Founded in 1792 by George and William Boone, cousins of Daniel Boone, Boonsboro is an important center for Colonial and Civil War history in the area. It has six sites on the National Register of Historic Places, including the whole area around Main Street, and the Bowman House, a gorgeous, 19th-century log house. Boonsboro’s local surroundings are equally beautiful, with South Mountain rising in the distance. The Antietam National Battlefield nearby provides a somber yet striking landscape.

Cumberland, often referred to as “where the South begins,” became a major player in the Civil War and its aftermath thanks to its strategic location. The town has retained much of its historic charm from this period, with the downtown area featuring many lovely buildings from the era. Home to some of Cumberland’s most striking architecture, the Washington Street Historic District has exquisitely preserved examples of Gothic Revival architecture. Its surroundings are equally beautiful, with the Appalachian Mountains rising in the distance. 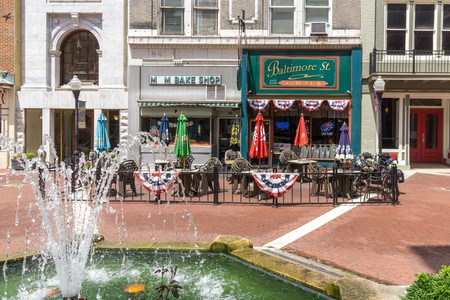 On the banks of the Chester River, Chestertown is fiercely proud of its maritime heritage. The port is still in operation, with numerous sailing ships and boats coming and going throughout the day, creating a lively atmosphere. The river also features the Schooner Sultana, a beautiful replica of an 18th-century British Navy ship that lends the port an impressive historical edge. The rest of Chestertown also has an incredible history, with buildings dating back to its Colonial heritage, and numerous museums and galleries exploring the area’s rich past and culture.

Founded in 1772, Ellicott City is one of the most historic towns in the state and is home to the country’s oldest surviving railway station. Made from blocks of locally quarried granite and featuring a gabled roof, the Ellicott City Station exudes an old-world charm and is now a museum. The entire main district is listed on the National Register of Historic Places, with more than 200 18th- and 19th-century buildings and the largely unspoiled Main Street, home to numerous local shops and picturesque houses. 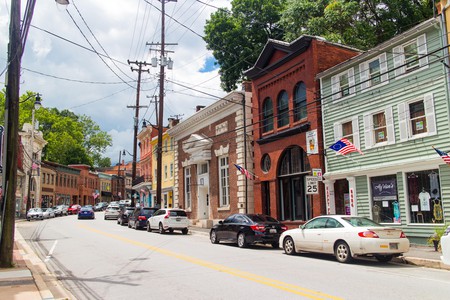 Known as the “pearl of the Chesapeake,” Rock Hall is a quaint seashore town with a thriving fishing and boating community. The harbor is filled with crab and oyster boats, which leave every morning and return with heaving baskets of shellfish for the area’s fresh seafood restaurants. The main town is equally lovely, with two large 18th-century mansions on the National Register of Historic Places, three museums that discuss the town’s local heritage and the maritime industry, and many picturesque board houses. It’s particularly stunning at sunset when the warm light envelops Rock Hall and its harbor in an intense glow.

Frederick, one of Maryland’s largest towns, is the ideal blend of historic and contemporary, with something remarkable around every corner. The historic downtown area is notable for the “clustered spires” of its numerous historic churches, which dominate the skyline and lend the area its character. Meanwhile, the Monocacy National Battlefield and the National Museum of Civil War Medicine make this town a must-visit for any history buff. For some natural beauty, the town’s peaceful parks have an abundance of unspoiled meadows and creeks. 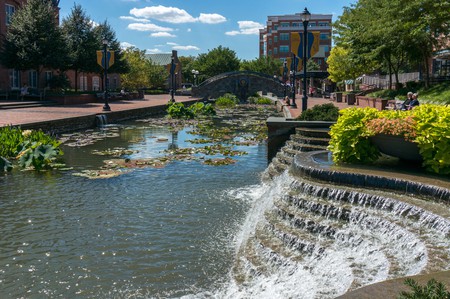 As it’s near two state parks, Thurmont has access to an abundance of natural beauty and is locally known as the “gateway to the mountains.” The awe-inspiring Cunningham Falls State Park is home to the largest cascading waterfall in Maryland. Additionally, the Catoctin Mountain Park features the edge of the Appalachian Mountains, hardwood forests and winding streams just a stone’s throw from Thurmont. The main town is quaint, with charming red-brick buildings and local independent shops aplenty. It also plays host to the Catoctin Colorfest, a yearly arts and crafts festival.

The motto of St Michaels is “Historic Charm, Nautical Adventure, Romantic Spaces,” and this small town delivers on its promise. Quaint, old-fashioned houses, boutiques and restaurants line the downtown area, while the harbor is a perfect spot to go for a stroll and relax while taking in the beautiful river views. The town is also home to the 19th-century Hooper Strait Light, one of only four Chesapeake Bay lighthouses built in the iconic screw-pile design; it remains one of St Michaels’ best attractions. 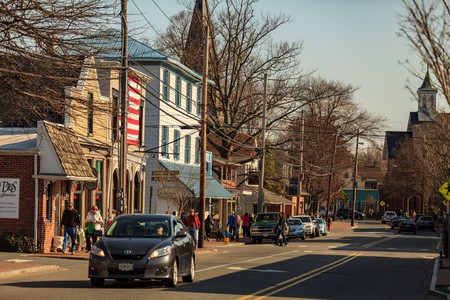