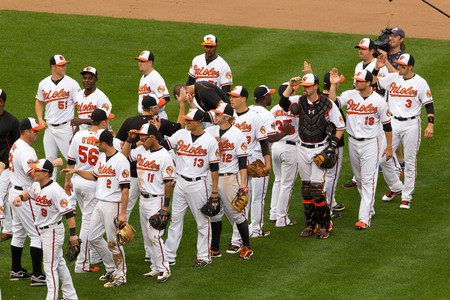 The Baltimore Orioles in their regular uniforms. | © Keith Allison / Flickr

At their September 18, 2018, game, the Baltimore Orioles will make history as the first professional American sports team to wear Braille jerseys.

Each jersey will feature the team’s name and the player’s last name spelled in Braille, which is the system of raised dots used by visually impaired people to read and write. After the game, the jerseys will be signed by the players and auctioned off, with all proceeds going to the NFB.

“We’ve made a conscious effort to create an environment where everyone feels welcome at the ballpark,” said Greg Bader, vice president of communications and marketing for the team, in an article for The Baltimore Sun. “We take our role as entertainer very seriously, but we also want to serve as an escape for some people, and as a platform to highlight the causes and morals that we feel strongly about. A ‘blindness awareness night’ puts it into perspective that there’s more going on out there than just wins and losses.”

Partnering with the National Federation of the Blind based right in their hometown was a natural fit for the Orioles. The federation was established in 1940 in Wilkes-Barre, Pennsylvania, uniting multiple state organizations to create a national collective. It is, to this day, the oldest and largest organization run by the visually impaired in the United States, now 50,000 members strong.

The federation provides resources to help the visually impaired live, work, learn and play, stating on their website that they “raise the expectations of blind people, because low expectations create obstacles between blind people and our dreams. You can live the life you want; blindness is not what holds you back.”

The first 15,000 attendees at the September 18th game against the Toronto Blue Jays will receive exclusive Orioles/NFB Braille alphabet cards from NFB volunteers. In addition, NFB president Mark Riccobono will be on hand to throw the game’s first pitch, and Carlos Alberto Ibay, a Filipino-American pianist and singer who lost his sight at birth, will be performing the national anthem.

Chris Danielson, NFB’s public relations director who will be among those handing out Braille cards, said of the Orioles in The Baltimore Sun, “We appreciate their spirit in reaching out to our community and letting the public know that blind people are sports fans, too – and that Braille is a simple yet elegant way for them to learn to read.”