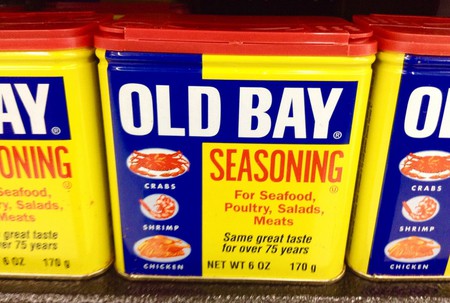 If you’re from Maryland, you know about Old Bay®, and if you’re not, you may have never heard of it. Pronounced more like Ol’bay, the seasoning is traditionally used for seafood, but has grown to be an icon. Read more about the history of this unique Maryland spice.

Old Bay® was a blend of 18 spices invented by Gustav Brunn, a German refugee who came to Maryland in 1939. Named after a ship line on the Chesapeake Bay, the spice grew in popularity during the second half of the 20th century. In 1990, McCormick & Company bought the spice, at which time they didn’t have any plans to distribute it outside Maryland. Today, the company still manufactures it north of Baltimore, and does distribute it to a much wider area. The recipe is the same as it was over 75 years ago, and the can is wonderfully retro. Any restaurant in Maryland, especially those near the Chesapeake Bay, will have the seasoning, and it’s a must for your steamed crabs and crabcakes.

The official ingredients listed on a can of Old Bay® are: celery seed, salt, “spices,” red pepper, black pepper, and paprika. As you may imagine, this leaves a lot of speculation about what those “spices” are and how you can make your own. The internet is full of videos and blog posts about how to make your own seafood seasoning, which can be a good option if you’re not in Maryland (otherwise go to any grocery store and save yourself some effort).

The seafood spice is an icon – you’re almost not a Maryland household without a can in the cupboard, and Maryland food and beverage companies have embraced the spice, putting it in seemingly everything. Flying Dog Brewery based in Frederick, Maryland made an Old Bay® Ale called Dead Rise, while at The Charmery ice cream parlor in Baltimore, Maryland, you can find an Old Bay® Caramel (a local favorite). Utz’s potato chips has an off-license “Crab Chip” flavor and Herr’s has occasional sold Old Bay® Cheese Curls. And it’s not a Bloody Mary in Maryland unless the rim is coated in the spice (and once you’ve had it that way, it’s hard to go back to an un-coated rim). You can also just buy a can to sprinkle on any seafood, or get creative by putting it on popcorn, chicken wings, or focaccia bread.