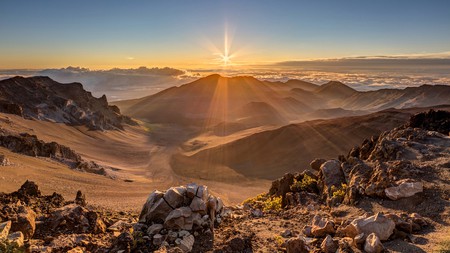 Not even Mother Nature is free anymore…

Yes, a Hawaiian sunset is so beautiful you now need to pay to see it.

Under normal circumstances, a sunrise rarely requires an advanced booking, but with overcrowding, a load of accidents and a growing number of hazardous selfie sticks, explorers of Haleakala National Park in Maui, Hawaii now have to reserve a coveted #epicsunrise spot to watch the sun come up.

#tbt to one year ago, touristing hard in Hawaii. Sunrise on Haleakala

Known for its striking views of volcanic craters, mountain tops and ocean vistas, the Associated Press reported that the now-ticketed attraction’s rise to popularity was because of us social media fanatics – damn you Twitter, Facebook and Instagram!

Let's share a sunrise together? I'm serious, message me. ❤️

In fact, visitor grams’ were so popular that there were often huge traffic pile-ups just to get to the striking viewing point.

Here's another oldie but goodie! #travelphotos are my fave. #Maui #fujifilm #rookieshots

Park superintendent Natalie Gates told the AP: “If you ever went up there, you would see that fully half to three-quarters of our visitors who are watching the sunrise are either taking photos that they immediately broadcast to their friends, or filming it.”

Ticketed reservations to the site began on Feb 1, according to a local newspaper. How much, you ask? A very reasonable $1.50, in addition to the National Park fee, of course.

If you’re planning on going, you can reserve 60 days in advance, and remember to show the park rangers your tickets on arrival to the park between the hours of 3am and 7am.

Sing it with me everyone! "If I could fall into the sky, do you thing time would pass me by?" . . #sun #sunrise #beautiful #aloha #maui #haleakala #optrix #optrixpro #beautiful #gorgeous #radiant #warm #sky #blue #hilife #808 #goodvibes #goodtimes #funinthesun #cold #freezing #greatballoffire #iphone #iphone6s #volcano #summit #10023 #high

The things we do for the perfect Instagram, eh?