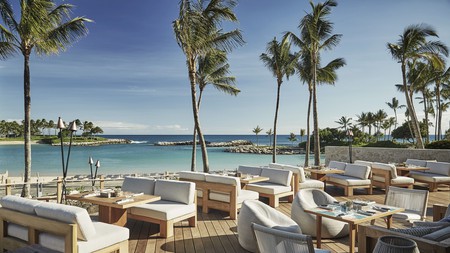 These spoiling Hawaiian hideaways in Oahu roll out the red carpet for guests, with award-winning chefs and poolside cabanas kitted out with gadgets, so you don’t have to lift a finger.

Whether this is your first time visiting Hawaii and the islands of Aloha, or you’re a returning sun bird seeking warmth, a few days in Oahu is always a good idea. From historic estate properties turned luxury hotels to not-so-secret celeb hideaways and all-inclusive family-friendly resorts – no matter which you choose, paradise is on your doorstep. Here’s our round-up of some of the best resorts Oahu has to offer. 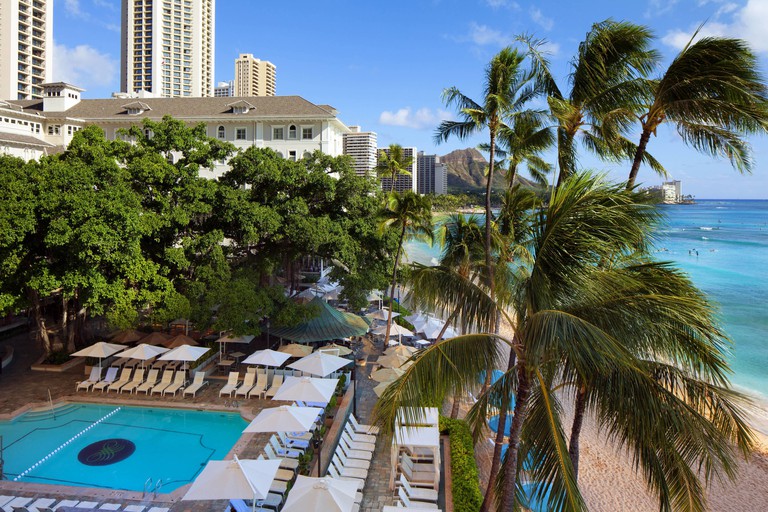 Courtesy of Moana Surfrider / Expedia
View Rooms
Flex to the max with a stay at the First Lady of Waikiki. Not only are you on Waikiki Beach, but there are scenic spots scattered everywhere around the property, too: from your balcony overlooking the sand to the majestic 75ft (23m) banyan tree planted in 1904, the Moana Lani Spa with its beachfront Lomi Lomi massages and the sweeping koa-wood staircase in the Moana Wing. Rooms-wise, you won’t regret forking out for the oceanfront suite with two separate balconies, so you’re in a prime position to catch both the sunrise and sunset.
EVERYTHING YOU NEED TO KNOW

The Kahala Hotel and Resort 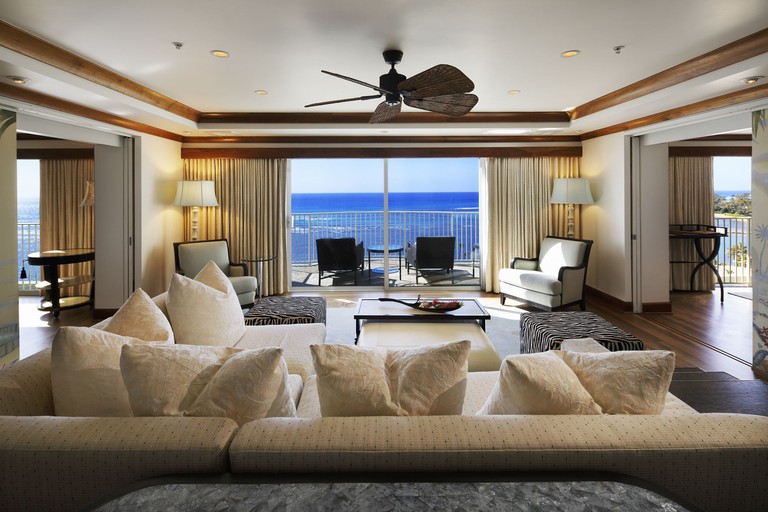 Courtesy of the Kahala Hotel and Resort / Expedia
View Rooms
Everyone who’s anyone has stayed at this illustrious resort. Once the hiding place of Elizabeth Taylor and Richard Burton, this Honolulu landmark retains its grand Old Hawaii allure, without being stuffy. Rooms are spacious and understated, some looking out to the ocean and bathrooms accommodating double sinks and a deep-soaking tub. But, really, it’s the pristine stretch of white-sand beach that’s the star of the resort. While only a half-mile (0.8km) long, it’s partially secluded and thus one of the few “private” beaches in Hawaii, where all beaches are public. Of the five dining concepts, Hoku’s is a favorite for its nature-to-table Hawaiian cuisine and celebrated Sunday brunch.
EVERYTHING YOU NEED TO KNOW 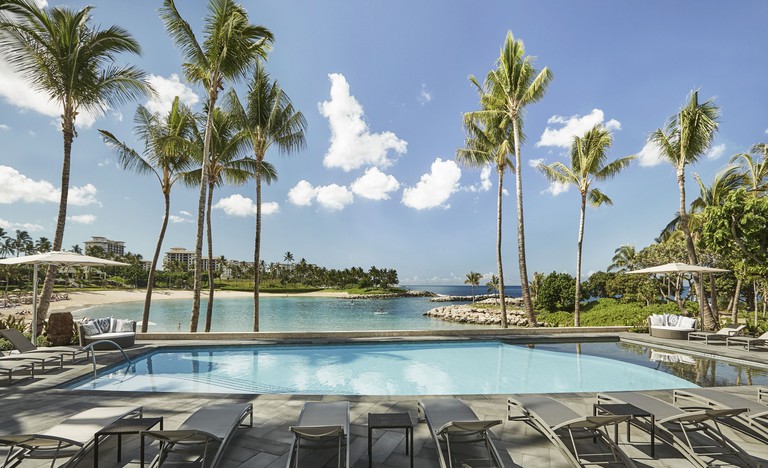 Courtesy of Four Seasons Resort Oahu at Ko Olina / Expedia
View Rooms
The Four Seasons experience doesn’t come cheap – for good reason. At Four Seasons Ko Olina, the elegant beach-chic rooms are expectedly luxurious and come with wraparound ocean views. Within the resort, there’s a flurry of extras: an adults-only infinity pool, with cabanas kitted out with Kindles and Bose headphones; an activities desk that organizes everything from adrenaline-raising helicopter tours to turtle spotting with former Navy Seals; and creative gourmet concepts, like Mina’s Fish House by chef and James Beard-awardee, Michael Mina. If we have one complaint, it’s that they make it impossible to leave.
EVERYTHING YOU NEED TO KNOW 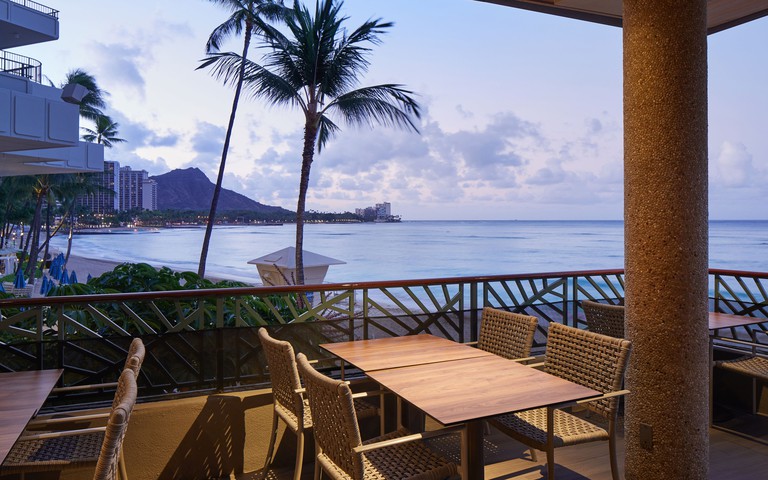 Courtesy of Outrigger Waikiki Beach Resort / Expedia
View Rooms
As the former location of the Outrigger Canoe Club, it’s no surprise that the hotel’s open beach access, mere footsteps from its freshwater pool, is its outstanding feature. This relaxed Waikiki resort has all you need for a week in the sun, including light-filled rooms with balconies to enjoy the gentle Hawaiian breeze and access to a private lounge for Voyager 47 Club rooms. There are always good vibes going at Duke’s Waikiki restaurant, especially on lazy Sunday afternoons when the smooth vocals of Hawaiian musician, Henry Kapono, entertain. For romantics, the hotel hosts a traditional Hawaiian vow renewal ceremony weekly as a complimentary service for guests.
EVERYTHING YOU NEED TO KNOW 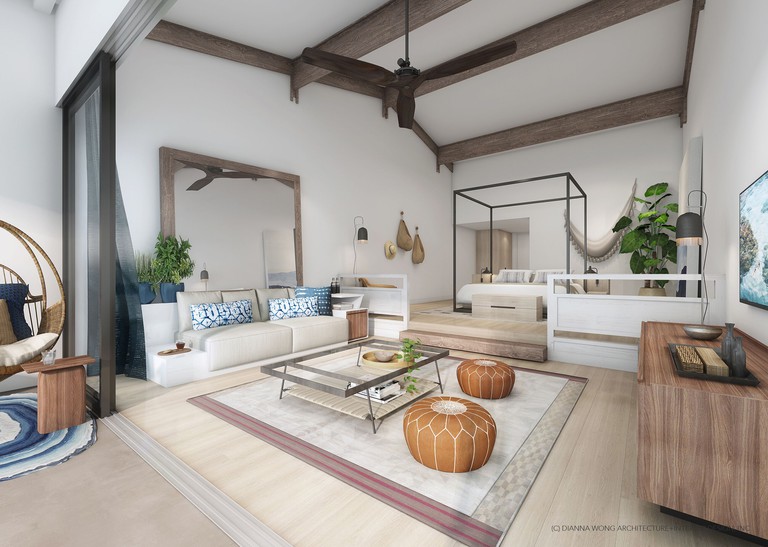 Courtesy of Turtle Bay Resort / Expedia
View Rooms
Oahu’s famed North Shore is fully deserving of the hype. The pace is more chilled, the water pristine and the waves, awe-inspiring. One resort that has all the highlights is Turtle Bay. The self-contained property has ample distractions (horseback-riding lessons, an on-site spa, a golf course, two saltwater pools) and because it sits on Kuilima Cove, you’re in for a treat when it comes to snorkeling and turtle-spotting. The generously sized rooms have all the expected creature comforts, with most looking out to the ocean.
EVERYTHING YOU NEED TO KNOW 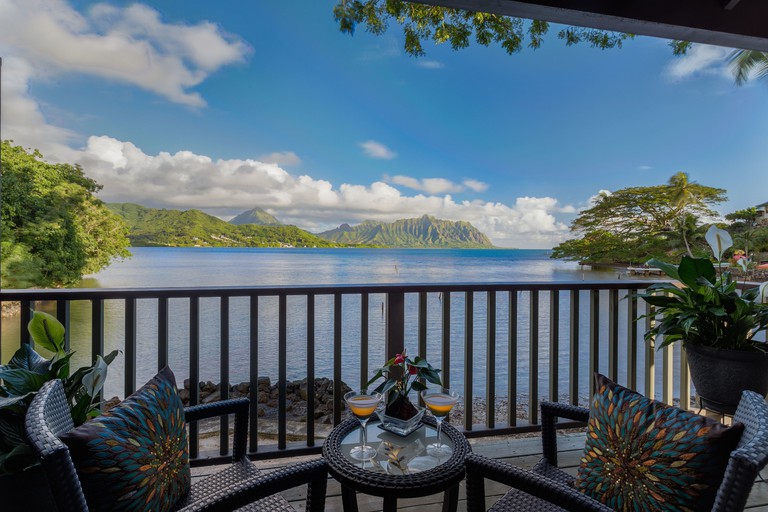 Courtesy of Paradise Bay Resort / Expedia
View Rooms
For a quieter, activity-based getaway, the secluded Paradise Bay Resort is a compelling choice. Facing picturesque Kāneʻohe Bay, spacious self-catering cottages look out to the majestic Koolau Mountains and Chinaman’s Hat Island. Yoga and meditation classes are included with the resort fee, as is snorkeling and kayaking equipment. You will have to shell out extra for a chartered boat excursion to the nearby sandbar for an afternoon of snorkeling and a volleyball session, but it’ll be worth it.
EVERYTHING YOU NEED TO KNOW

Aulani, a Disney Resort and Spa 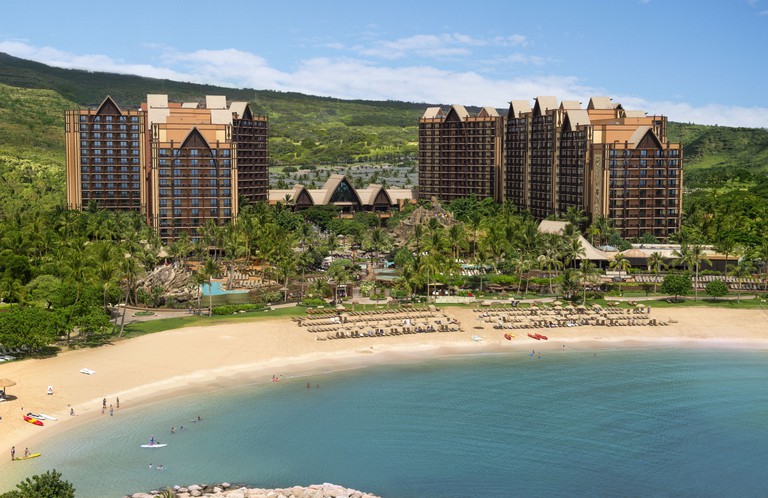 Courtesy of Aulani, a Disney Resort and Spa / Expedia
View Rooms
Vacations are meant to be relaxing – not always easy with a couple of kids in tow. But the family-friendly Aulani resort buys you some breathing space, so you can at least finish your coffee while it’s still warm, thanks to its myriad attractions: waterplay areas, the Rainbow Reef for snorkeling, photo ops with Moana and Mickey and fire-pit storytelling. For a proper escape, park them at Aunty’s Beach House while you take a breather at the adults-only Wailana Pool or tee off at the neighboring Ko Olina golf course. Come sunset, gather for snaps at Ko Olina Lagoon One, on the Aulani Disney Resort’s doorstep. Mickey might even swing by for a selfie.
EVERYTHING YOU NEED TO KNOW 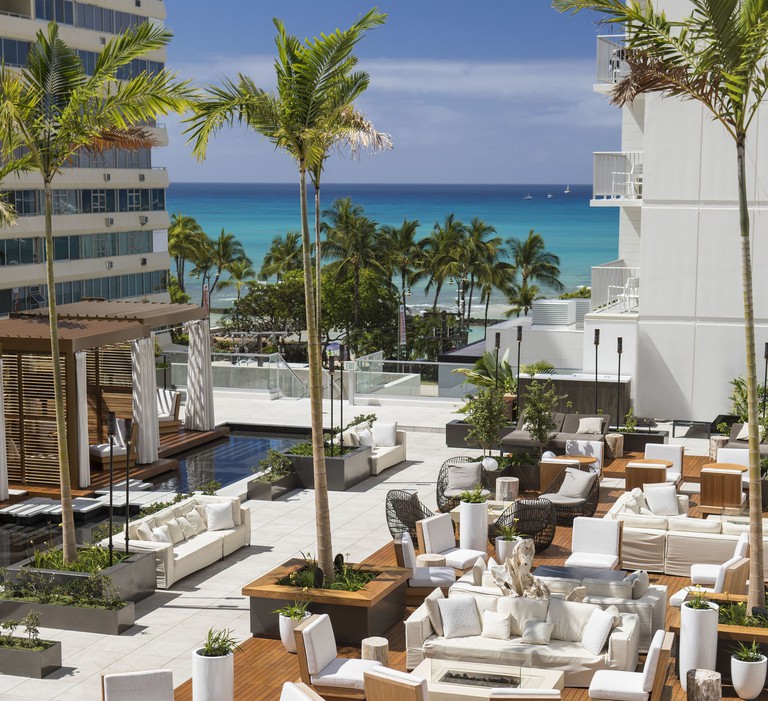 Courtesy of 'Alohilani Resort Waikiki Beach / Expedia
View Rooms
Sixty steps. That’s all it takes to get from this hotel to Waikiki’s sandy shores. Renovated in 2018, this 839-room hotel is all about the wow factor. There’s the 280,000gal (1,000,000lt) aquarium in the lobby filled with tropical fish, two restaurants from Masaharu Morimoto (of TV fame), an infinity pool that’s popular with local scenesters and rooms decorated in an understated luxe style (all cream hues and warm wood accents). Shell out for one of the nine suites, and all-day access to the Longboard Club is thrown in, plus deep-soaking tubs and an expansive lanai (verandah) for extra bragging rights.
EVERYTHING YOU NEED TO KNOW 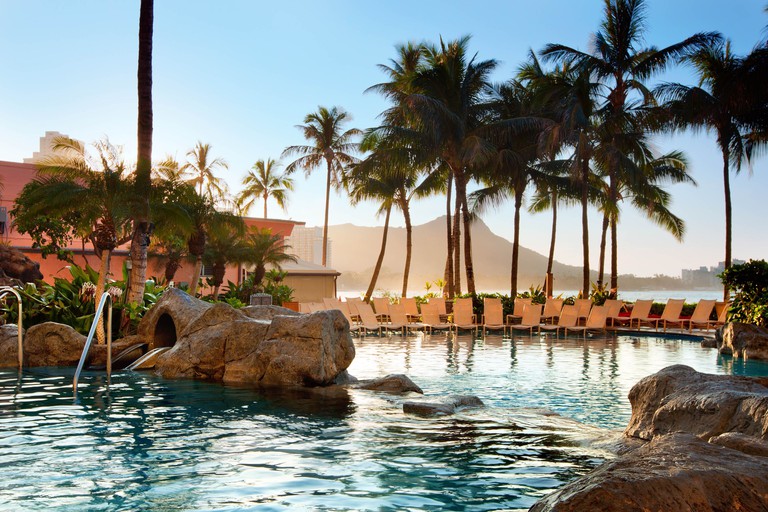 Courtesy of the Royal Hawaiian / Expedia
View Rooms
Before there was millennial pink, there was the bubblegum façade of this historic hotel, which opened in 1927. Dubbed the Pink Palace of the Pacific, the hotel’s postcard-worthy stucco and Moorish exterior has made it a Honolulu icon. Rooms are split between the Historic Wing, where old-world grandeur meets pockets of the resort’s distinct pink hue. Contrastingly, the rooms in the newer Mailani Tower are understated and minimalist in style. Paying tribute to the resort’s storied past, there are unique artefacts illustrating the history of the Hawaiian monarchy and daily cultural activities (lei-making, crafting of kukui-nut bracelets and hula lessons). The best way to take it all in, though, is at the weekly Aha Aina Luau, where Hawaii’s history is re-enacted through a mele of food, song, stories and hula.
EVERYTHING YOU NEED TO KNOW 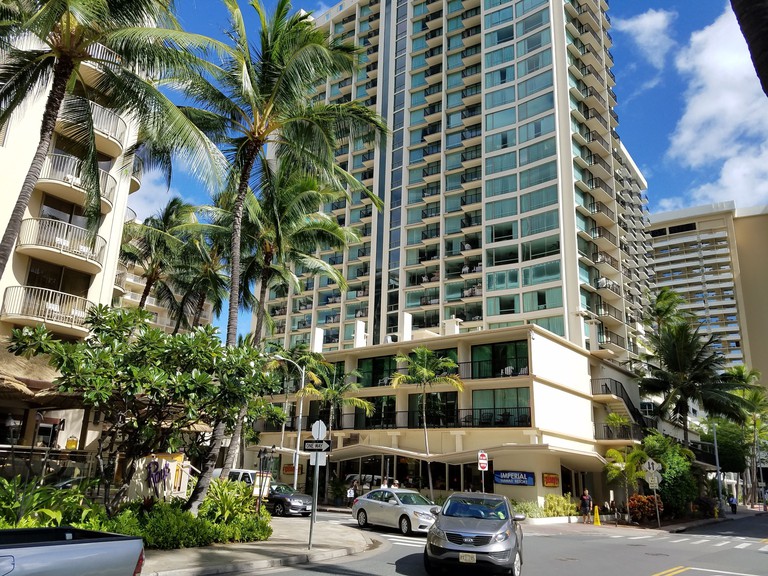 Courtesy of the Imperial Hawaii Resort at Waikiki / Expedia
Book Now
Functional and fuss-free, the rooms at the Imperial Hawaii Resort come with everything one needs for an extended stay. The Hawaiian-themed decor differs according to rooms (ranging from studios to three-bed units), but the open-concept living spaces come equipped with full or mini kitchens, making it a top pick for travelers who prefer the freedom of self-catering. There’s a rooftop pool deck with outdoor hot tubs and a fitness room, but it’s the location that’s the ace card: only a few minutes’ walk from Waikiki Beach and all the action.
Open In Google Maps
205 Lewers Street, Waikiki, Honolulu, Hawaii, 96815, USA
+18003472582
Visit Website
Give us feedback
Give us feedback