4 Masterpieces You Can Only See in Hawaii 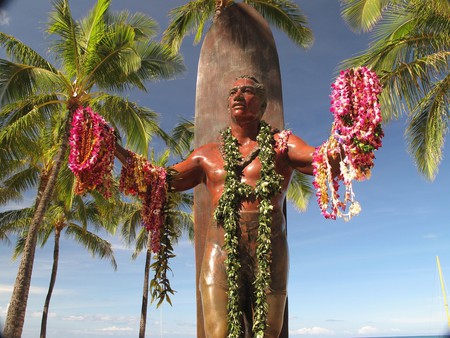 While some of Hawaii’s traditional and modern art is found all over the world, a few special pieces are only privy to island natives and visitors. These iconic statues and public works—all free to view—pay tribute to the spirit of Hawaii and its legendary residents. Here are four masterpieces you can only see in Hawaii.

Duke Paoa Kahanamoku—one of Hawaii’s most notorious citizens—grew up living and surfing the breaks of Waikiki. A five-time Olympic medalist in swimming, Kahanamoku is also credited with spreading the popularity of surfing to the world. Fittingly, a nine-foot statue of him with a surfboard and outstretched arms lends itself to the busy Kalakaua Avenue. The bronze statue was erected in 1990 and sculpted by artist Jan Gordon Fisher.

A few statues of King Kamehameha the Great were crafted, but the original is located near the King’s birthplace in North Kohala on the Big Island. Once presumed to be lost at sea, the original statue, erected by Thomas Ridgeway Gould, is constructed of painted cast brass. King Kamehameha I is commemorated for his undying love for the Hawaiian people, his unrivaled battle strategy, and for uniting the eight main Hawaiian Islands under royal rule in 1810.

Adopted by the monarchy in 1845, the original coat of arms is best seen on the gates of the Hawaiian royal residence, ʻIolani Palace. “Ua Mau ke Ea o ka ʻĀina i ka Pono“—roughly translated to “The life of the land is perpetuated in righteousness”—remains the state motto. A variation on the coat of arms is still used today as the state seal.

Another beloved local boy, singer-songwriter Don Ho is most noted for his 60s hit “Tiny Bubbles.” His life as an entertainer is commemorated with a bronze statue depicting his charm and radiant laughter. The statue is located under an iconic and beloved 160-year-old banyan tree in Waikiki’s International Market Place where he performed for years and attracted celebrities including Frank Sinatra.