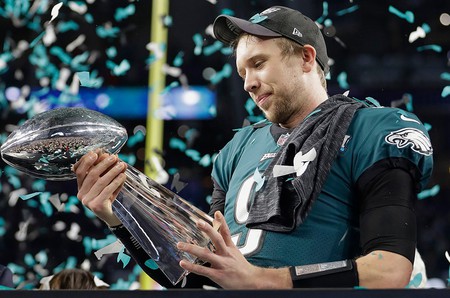 “Nick Foles, you and the Philadelphia Eagles have just won the Super Bowl. What are you going to do next?”

Who’s next? Find out right now which player is “going to Disney World.” #SuperBowl pic.twitter.com/CtAlM9jTY6

Out of all the places to celebrate winning the biggest prize in professional football, why would Foles, the Eagles MVP-winning quarterback, head to Disney World? It’s not because he wants to take his seven-month-old daughter, Lily.

It’s a Super Bowl tradition dating back to the 1980s.

The slogan can be attributed to Jane Eisner, wife of former Disney CEO Michael Eisner. According to his autobiography, Work in Progress: Risking Failure, Surviving Success, Eisner recalls having dinner in 1987 with his wife, Star Wars director George Lucas, and Dick Rutan and Jeana Yeager, the first people to fly around the world without stopping.

Eisner wrote: “It was late and the conversation hit a lull as we waited for our food. So I asked Dick and Jeana, ‘Well, now that you’ve accomplished the pinnacle of your aspirations, what could you possibly do next?’ Rutan responded, without hesitation, ‘I’m going to Disneyland’ And of course I go, ‘Wow, that’s cool! You made the right choice.’ But my wife interjects: ‘You know, that’s a good slogan.’ ”

The Disney promo traditionally airs after the conclusion of the Super Bowl and features the game’s MVP, quarterback, or other star excitedly saying a similar phrase with “When You Wish Upon a Star” playing in the background.

These proclamations aren’t just made in jest. The players traditionally follow suit, visiting either Disney World in Florida or Disneyland in California shortly after. They’re treated to a parade to culminate their prior victory on football’s biggest stage.