Orlando’s great dining scene isn’t just limited to its restaurants. The city in Florida is filled with food trucks which provide top-quality cuisine from all over the world. Here is our compilation of 10 of the best that you need to track down. 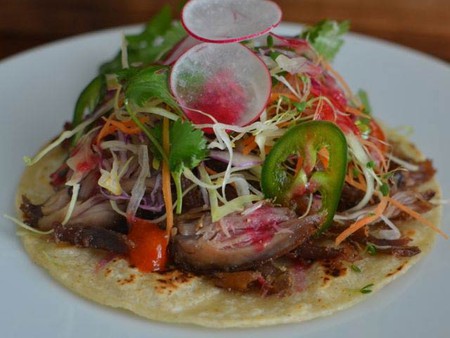 Bem Bom is one of the best places to pick up high quality Portuguese food in the Southern states. Chef Chico Mendonça perfected his skills by working in Bermuda and Dallas before bringing his unique blend of Portuguese, New American and French cuisine to Orlando. Specialties include mango infused fish, mushroom truffle quesadilla, and carnitas tacos – a type of Portuguese taco filled with braised pork. Anyone who has visited Portugal will be familiar with pastel de nata, the famous Portuguese custard tarts, and you’ll be pleased to learn that they sell them here. They also sell soups and salads that can be taken away to eat at a later date. 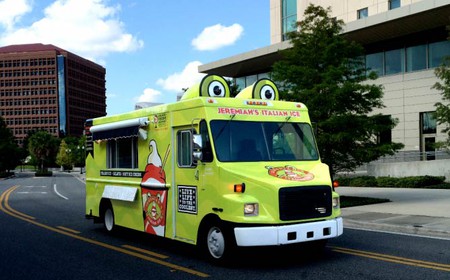 Jeremiah’s Italian Ice serves a unique dessert which is a combination of pureed fruit, ice cream and fresh fruit. There are over 40 varieties at their truck, including pina colada, mint chocolate chip, and pumpkin pie. Everything is served in generous portions in the frog logo plastic cups. You can either buy an ice cream, a straight ice, or a swirled combination of the two. The truck has been a beloved part of the Orlando food truck scene for years.

Twisted Plates is the place to get gourmet inspired food without having to put on a tux and shell out a small fortune. The menu changes regularly, and unlike many food trucks, they offer a range of entrées as well as quick bites and desserts. The trio who own the truck also focus on supplying in-season and fresh ingredients. Twisted Plates will also soon be available for private catering, so watch this space.

True to their name, Daydream Pizza produces the kind of pizzas that everyone conjures up in their hungriest daydreams; a crispy crust, a thick layer of cheese, and tons of toppings. The menu includes everything from regular classics such as margherita to more inventive creations such as pepperoni and marshmallow. There is also a selection of pizza rolls and hot dogs on offer, making this the ideal truck to satisfy late-evening snack cravings. The owners pride themselves for super friendly service and extra fresh ingredients prepared from scratch.

Treehouse Truck specialize in party catering as well as every-day street food, which has made their truck a local favorite at events and celebrations. And it isn’t hard to see why. The truck serves the all-American street food of your dreams, such as burgers, cheesesteaks and fries. The owners distinguish themselves from the town’s numerous burger joints by supplying classics with unexpected twists; you can order a French onion cheeseburger (complete with melted gruyère and caramelized onions) and the intriguing ‘Jerry’s 12-0’, which is seasoned with espresso and creamy peanut butter. They also cater to the southern tradition of deep-frying by supplying deep-fried oreos and PB & Js.

If you miss the spirit of New England seafood while you’re in the south, Monsta Lobsta Truck is the street food provider for you. The truck is run by a seafood enthusiast from Maine who aims to provide healthy fast food. Highlights of their menu include Lobster rolls with hot sauce, and New England style clam chowder. While Monsta Lobsta is pricier than other trucks in the area, it is still cheaper than a restaurant and the experience of enjoying fresh lobster in the Florida sun is priceless. The owners also maintain a social conscience, as a portion of their income is donated to charity.

Curbie’s Sidewalk Café is an easily recognizable truck, with the statue of liberty and the stars and stripes emblazoned on one side, bringing cuisine from all over America to one spot in Orlando. Delicacies from all over the states include New Orleans shrimp po’ boys, Southwestern cheeseburgers, and Californian style fish tacos. A menu highlight is their selection of hot dogs, which come in Chicago, New York, Seattle, West Virginia, Carolina and Coney Island varieties, each prepared in a distinct style with a range of trimmings. Check out their facebook page to find out where they will be next.

If you haven’t experienced genuine cajun and southern cuisine, Dixieland Diner is your chance to try it out. This convenient food truck serves classic dishes such as shrimp and grits and jambalaya, as well as Nashville style hot chicken sandwiches. Make sure to try their ‘Boudin Balls’, which are a fun way of serving traditional blood sausage with an enticing dip. The winning combination of Southern hospitality and portion size means that the queues for this food truck are long, so make sure to get their early before their stock runs out. Thankfully, the quality of the food more than makes up for any time spent queuing.

If you’re used to picking up blended drinks at the supermarket, Au Naturel Juice and Smoothie Bar are prepared fresh in front of you while you wait. The owners only started up their truck in 2013, but have gained a substantial following since the beginning. They provide both ultra healthy green juices and indulgent peanut butter and cacao smoothies. The menu changes at every event, and you can check out where they’ll be next via their event calendar. They are also always outside Track Shack on N Mills Avenue all day every Thursday.

Sweet City Gelato provides traditional Italian gelato and sorbetto. All of their sorbetto flavors are vegan and gluten free. They also serve a range of desserts such as cakes, brownie sundaes, and gelato cookie sandwiches, all of which include the truck’s homemade ices. The truck is a also a regular and welcome addition to sports games in the area. They also serve ‘Brooklyns’, which are an ice cream case which is a delicious combination of a brownie and a blondie. Menu highlights include chocolate hazelnut gelato and blood orange sorbetto.