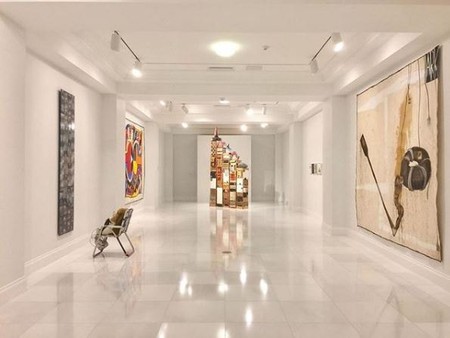 Perched on the edge of the thoroughfare of Miami’s Coral Way, the American Museum of the Cuban Diaspora is a reminder of the Cuban culture stitched into the city’s roots.

The museum, previously housed in Miami’s Cuban neighborhood of Little Havana, opened its new location in 2017, with the goal of providing a home for Cuban art in Miami.

"[Art] gave me a weapon to express myself, to express whatever I feel, and put it down on canvas" – #LuisCruzAzaceta #AtTheCuban #VisionaryVoices

The Cuban (for short), gives visitors a look at history, showcasing the cultural contribution and influence the Cuban Diaspora has had in the arts and humanities. Exhibits include paintings and sculptures by artists born exiled from Cuba.

The museum’s exhibition on display is titled “Dictators, Terrorism, War and Exiles” by Cuban-born artist Luis Cruz Azaceta, The 29 works cover various topics including exile experiences, dictatorship abuse, as well works depicting terrorism in several countries. Azaceta works primarily on large canvases, with highly expressive colors and themes of urban violence. While living in his former home in Cuba, he observed the violence of the communist dictatorship, which he prominently showcases in his works. Many of his paintings are exhibited in the Whitney Museum of American Art, and the Smithsonian American Art Museum, among others.

Not sure what felt longer, 57 years in exile, or 10 years in construction! Are you ready to #MeetTheCuban? 🇨🇺🇺🇸

Though expected to draw many crowds, the American Museum of the Cuban Diaspora remains closed throughout much of the week. The doors are only open to the public on weekends from 10 a.m. – 4 p.m.