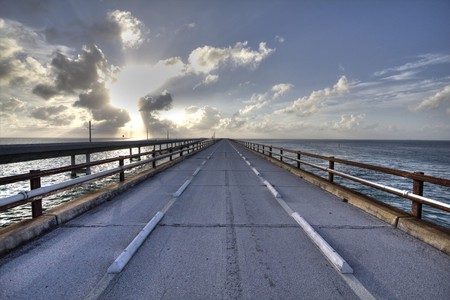 The Florida Keys are renowned for their pristine waters, beautiful reefs, and world-class fishing. Unless you’re getting around by boat (in which case, you’re a lucky person!), then the only way you’re going to make it down to the southernmost point of the continental United States is by driving there. On this drive you will travel over a truly incredible feat of engineering that at one point was the longest continuous concrete bridge in the world. Here, discover a brief history of the Seven Mile Bridge.

Built in 1982, the Seven Mile Bridge actually consisted of two bridges in the same location. The old bridge was completed in 1912 and was originally given the name Knights Key-Pigeon Key-Moser Channel-Pacet Channel Bridge (a mouthful of a name, we know!). The first bridge was built under the direction of Henry Flagler and Clarence S. Coe as a part of the Florida East Coast Railway’s Key West Extension, also known as the Overseas Railroad. After the infamous Labor Day Hurricane caused immense damage to the railroad tracks in 1935, the bridge was eventually rebuilt for automobile use only. Interestingly enough, those tracks were recycled and used to create the guardrails of the new bridge. 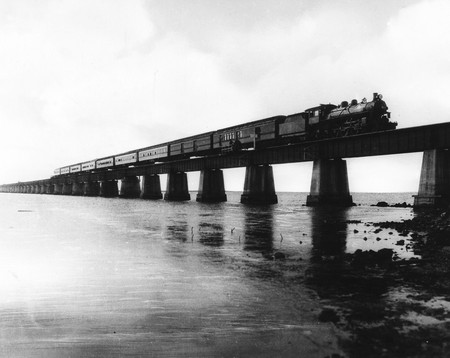 The vast majority of the original bridge still exists, although the swing span — which allowed passage of boats in the Moser Channel near where the bridge crosses Pigeon Key — was removed in the aftermath of yet another destructive hurricane (Hurricane Donna) in 1960. Today, pedestrians and cyclists still use the old bridge, taking advantage of the magnificent manmade ocean trail. Fishing off of the old bridge is a common activity, and one of which the residents of the Keys have been enjoying since the bridge was closed off to vehicular traffic. However, after all of these years without upkeep, the bridge is slowly falling apart; saltwater and storms are eroding it faster than the state can afford to repair it.

Due to the damage and corrosion that has caused Old Bridge to sag over the last few decades, it will be closed from July 2016 to April 2017 for renovations during a $2 million repair project that is aimed to build parking lots, handicap-accessible walkways and picnic areas. This project is just the first phase of a larger $77 million restoration plan that was agreed upon in 2013 to save the Old Seven Mile Bridge. When the bridge is refurbished it will be able to hold 17-ton vehicles.

The history of the Old Seven Mile Bridge is closely tied with Florida’s history — Henry Flagler’s railroad down the east coast of Florida is what opened the state to the world. He is without a doubt one of the most influential people in Florida’s history, turning a once untouched and unappealing land of wild creatures, menacing mosquitoes and muggy weather into a developed region with reliable transportation and a huge potential for economic success.

The total length of the new bridge is actually 35,862 feet (10,931 meters) or 6.79 miles (10.93 kilometers), and is shorter than the original. Each April the bridge closes for approximately 2.5 hours on a Saturday and a ‘fun run,’ known as the Seven Mile Bridge Run, is held to commemorate the Florida Keys Bridge Rebuilding Project.