5 Facts About Ray Charles: The Genius of Soul

Ray Charles said in his autobiography, Brother Ray, “music is nothing separate from me. It is me. I can’t retire from music any more than I can retire from my liver.” Ray Charles is his music. He lit the fire for the creation of a new genre – soul – and ever since, like his 1961 album, he has been called The Genius of Soul. 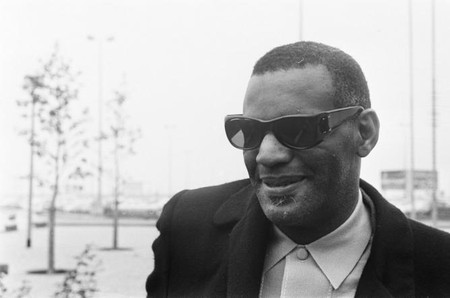 Ray Charles Was The Hardest-Working Cat In Town

Since his childhood days in Greenville, Florida, Ray knew he had to work hard in order to make it anywhere, grinding away just to feed himself. In the American musical scene of the ’40s and ’50s, being anything less than excellent was not an option. Regardless of where he was working – Jacksonville or Seattle, New York or Los Angeles – in Charles’ words, what mattered was “developing chops.” Ray’s conviction came through in all of his music, giving each song a life of its own.

Not only was music his most vital means of expression, it was also the source of his greatest pleasure. He tried to attain this level of pleasure with women and with heroin, but it was music that always won out in the end. Charles once said, “I was born with music inside me… music was one of my parts… like my blood.” Charles never knew his father, he watched his brother drown when he was five, and his mother died when he was only 15. Ray suffered immensely, but he got through it with music, and with women.

Ray firmly believed that you could love the person you were with but “get an extra piece on the side every now and then.” In fact, Ray fathered 12 children with 10 women. This second passion was, overall, less personally detrimental than his third, a heroin addiction that lasted for 17 years. Ray never let it get in the way of his music, and when he finally kicked the habit, he claimed he had had control over his body the whole time. Charles hated hypocrisy, but in his opinion, he was just “doing what felt good, what felt natural, and what felt good and natural to the person [he] was doing it with.” “If that was a sin,” he reasoned, “then sin on!”

Ray Charles walked the line between secularism and religion

Charles was the first to popularize linking blues with spirituals, which many Americans considered sacrilegious. He took the intrinsic suffering of both and made them tangible and accessible in beautiful musical forms. Growing up in the South meant that he had been exposed to both spirituals and the blues, so in his eyes, the two were an obvious combination. Soul meant two things to him: first, as a mixture of gospel and blues where feelings cannot faked, and second, as “just the way black folk sing when they leave themselves alone.”

Ray Charles never spoke or acted as if he were blind; instead, he often went so far as to use sight metaphors. His mother treated him like he was normal, so he acted like he was normal. Pity was the last thing he wanted. He had one rule in his life, the rule of three no’s: “No dog, no cane, [no guitar].” You would have to be an open-minded person to expect trustworthiness from people without being able to see a thing that they do, and Ray Charles was no exception to the rule. He trusted people, and for the most part his trust was justified. 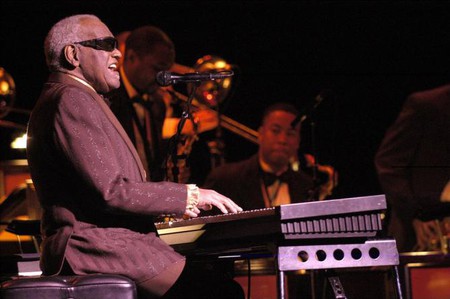 One of his last public performances, at the 2003 Montreal International Jazz Festival | © Victor Diaz Lamich/Wikipedia

Ray Charles was completely blind from the age of seven, but it rarely handicapped him. In fact, it contributed to his open mind and his neutrality regarding race issues for a good part of his life. When he went to a school for blind and deaf children, he discovered that they had segregated children who could not even see each other, which he found ludicrous. He did not play segregated jobs, nor did he perpetuate the “Crow Jim” ideology – the antithesis of Jim Crow laws – as exemplified by hiring white players in his band. Ray Charles didn’t care if you were black or white, green or blue; all that mattered was that you could play well. He grew up without the conscious awareness of the presence of racism, and he carried that with him throughout his life, even when he became involved in racial politics with the advent of the Civil Rights movement. He was never an extremist, and considered Dr. Martin Luther King, Jr. as his role model in respect to racial dynamics.