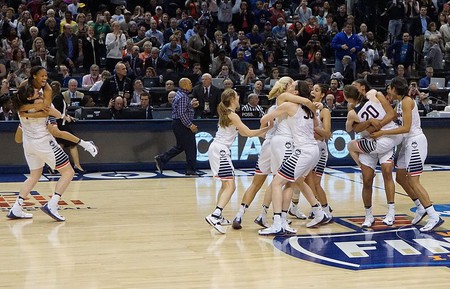 The University of Connecticut women’s basketball team continued its unprecedented winning streak with a 66-55 victory over the University of South Carolina on Monday. It was the top-ranked Huskies’ 100th consecutive victory (an NCAA record for men’s and women’s), a streak dating back to November 17, 2014.

Having not lost in two-plus years, we take a look back at some of the global headlines and events from that Monday when UConn lost in overtime to Stanford University.

For the 100th consecutive day, activists took to the streets in Ferguson, Mo., to try to enforce the indictment of police officer Darren Wilson for the August shooting of unarmed Michael Brown, 18.

The world reacted to the horrific beheading of American aid worker Peter Kassig, who was captured by ISIS a year earlier while delivering relief supplies to refugees in Syria. The White House confirmed the 26-year-old’s death on Nov. 16. Then President Barack Obama called Kassig’s killing “an act of pure evil.”

A 6.7-magnitude earthquake off the coast of New Zealand early that morning rattled much of the country but didn’t result in initial damages or injuries. The quake struck 110 miles northeast of the North Island of Gisbone, according to the United States Geological Survey.

Officials investigated an outbreak of Norovirus found among approximately 170 passengers aboard a Princess Cruises ship in the Pacific Ocean.

Workers in eastern Ukraine continued collecting debris from the crash site of Malaysia Airlines Flight 17, four months after the plane was brought down. All 298 people on board were killed when the plane was shot down July 17 over a rebel-controlled area.