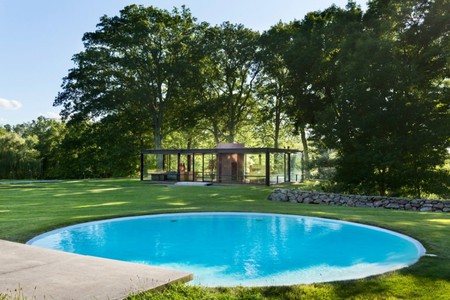 Set in the rolling hills of New Canaan, Connecticut, Philip Johnson’s Glass House is one of the world’s most celebrated works of architectural modernism. This historic house museum contains a simplicity and purity of form that is unparalleled in domestic architecture. As a critic and a practitioner, Johnson remained at the forefront of his field, introducing new styles of building and new ways of understanding architecture as art. The Glass House is no exception.

Born in Cleveland, Ohio in 1906, Philip Johnson was one of the most vital figures in the history of modern American architecture. Before he was an architect, Johnson studied classics and philosophy at Harvard University. After graduating in 1930, he traveled across Europe, where he encountered the radical designs of Mies van der Rohe, Gropius, Oud, and Le Corbusier. 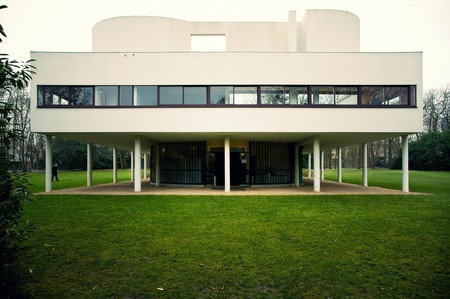 When he returned to the United States, Johnson was appointed Director of the architectural department of the Museum of Modern Art in NYC. With the help of his colleague, Henry-Russell Hitchcock, Johnson created his first exhibition – a review of European architecture of the previous decade. Together, Hitchcock and Johnson published The International Style: Architecture Since 1922. The show turned out to be highly influential, and the book soon became a standard text in the education of American architects.

In 1939, Johnson returned to Harvard’s School of Design to pursue a degree in architecture. Some of the buildings he designed include an annex for the Museum of Modern Art, the Seagram Building in New York, and the Epidemiology and Public Health Building at Yale. In addition to the buildings he designed, Johnson influenced the architectural profession through his lectures, writings, and teaching activities.

Philip Johnson’s Glass House is an estate of 16 buildings, structures, and objects situated on 40 acres of land. Understood to encompass the original buildings of 1949 and everything Johnson added afterward, the Glass House can be described as “the diary of an eccentric architect,” in the words of Johnson himself. Like a diary, the Glass House reflects Johnson’s stylistic changes over nearly five decades of practice, from modernism to formalism to postmodernism and beyond. 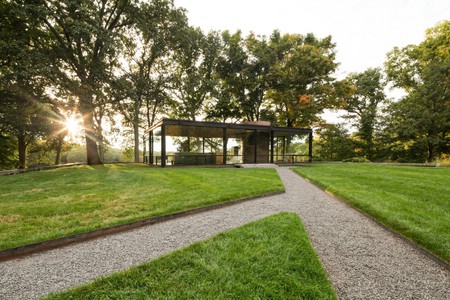 The Glass House itself is a rectangular prism measuring 32 feet wide by 56 feet long with a height of 10.5 feet. The design is simple: an open plan interrupted only by a circular brick bathroom – the only structure in the house reaching from floor to ceiling – and a long line of cabinets that contain the kitchen. Low cabinets and bookshelves serve as area dividers, and ventilation provided by floor-to-ceiling doors on all sides can be opened to the four winds. The house’s walls consist solely of 18-feet-wide floor-to-ceiling plate-glass sheets that create a series of lively reflections from surrounding trees and people walking inside or outside of the house.

Although the Glass House is the primary attraction on the site, Johnson used the vast landscape around it to allow his imagination to run wild, building several more structures including a guesthouse, a swimming pool, an art gallery, and more. Located about 80 feet to the southeast of the Glass House is the Guest House, also known as the Brick House. This building is also a low rectangular prism that measures 18 feet by 52 feet and, as the name suggests, it is made out of brick and only has three large circular windows on the east, contrasting the extreme lightness and transparency expressed in the Glass House. Just north of the Glass House and the Guest House lies a circular swimming pool 32 feet in diameter. Installed in 1955, this circular pool adds balance between the rigid structures of the Glass and Guest House. Johnson later designed a gallery in 1965 to contain his painting collection. The art gallery is built into a grassy hill northeast of the Glass House. From the outside, the gallery appears to be a large mound of grass.

Grainger, purchased in 1990 by Johnson’s partner, David Whitney, was often used as a hot weather retreat. The building had both air conditioning and an early Pioneer flat-screen TV, but no bathroom. It became the couple’s version of a man cave. Whitney added a peony garden in 1991, containing ten tree peonies, 41 peonies, and 25 irises. 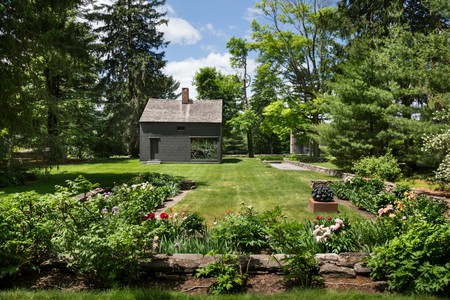 Johnson garnered national significance in landscape architecture because of his gardens and other environmental designs. He believed that the landscape was just as important as the structures he built. Johnson valued the order and control of the Glass House, but he also valued the romantic nature of the fields and woods that surrounded the house.

Thus a series of informal paths connect the houses, pond, and galleries. The path leading to the galleries has two distinguished features: a narrow arched steel-plate footbridge crossing a drainage ditch, and a timber observation platform. 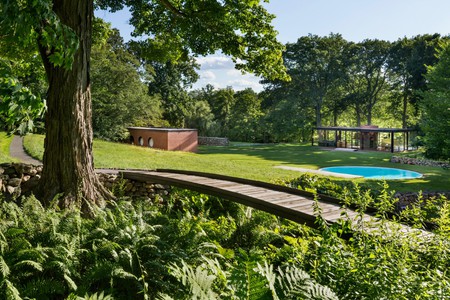 In 1986, Philip Johnson donated his estate to the National Trust for Historic Preservation with the agreement that it would be opened to the public after his death. Today, you can visit the Glass House from May 1st through November 30th to learn more about his life and work.