Why the Los Angeles Watts Towers Are So Important 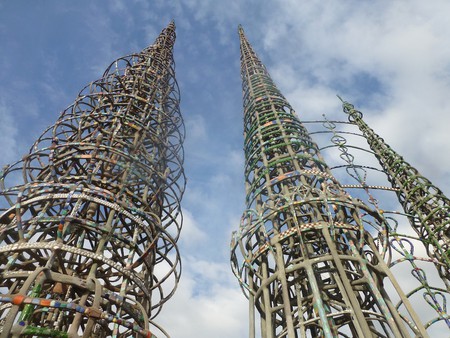 The Watts Towers are a testament to perseverance, and one of Los Angeles’ best examples of outsider art.

Built over the course of 33 years by Simon Rodia—an Italian immigrant who made his living in construction—the architect purchased a lot on 107th Street in Watts in 1921 and began his masterpiece. He called it Nuestro Pueblo (“our city” in English).

Rodia built 17 conical structures, each spiraling up in rings of wire, steel, and cement, glittering with broken pieces of glass, pottery, tile and even seashells. The tallest tower is 99.5 feet (30.3 meters) high—an impressive feat considering that Rodia worked on the towers with no help and no modern machinery. He employed just simple tools, nothing electric, and used the structure itself as scaffolding. When asked about the inspiration behind his work, the artist simply said, “I had in mind to do something big, and I did it.”

According to Watts Tower Arts Center Director Rosie Lee Hooks, Rodia worked at tile manufacturer Malibu Potteries, but also as a minister. He built a baptismal for children and another for adults. He’d also perform wedding ceremonies where couples would enter through two separate doors, and then exit via a single door to signify the union they’d just made. Notably, Rodia did not have any particular religious affiliation. 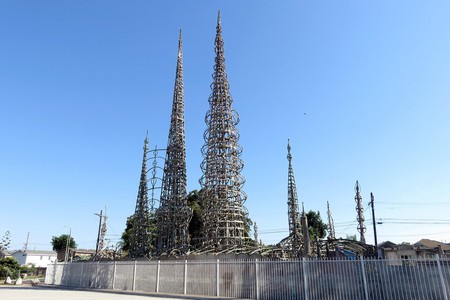 Los Angeles almost destroyed the Towers. In the mid-1950s, when Rodia was 75 years old, he handed over his property to a neighbor and then departed for the Bay Area town of Martinez. In 1959, city officials ordered the structures demolished, indicating they posed a possible hazard; Rodia’s house had burned to the ground, possibly due to an errant firecracker. Though Rodia wasn’t around to offer any objection, other people had come to appreciate his work. A group of citizens quickly formed to campaign for its preservation, organizing and financing engineering and structural tests that indicated that the towers were, in fact, safe enough to keep around.

By 1961, the Watts Tower Arts Center had formed, teaching art education to residents. Artist Lucile Krasne taught the first classes on the foundation of where Rodia’s house once stood. Education and outreach programs continue to this day. There are music and art classes, a gardening program, courses for adults with special needs, and more. 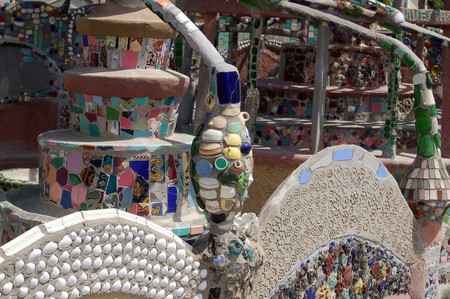 Rodia passed away in 1965. That same year, tensions between residents of color and the LAPD boiled over into the infamous Watts Riots, which raged on for six days. A total of 34 people were killed and over 1,000 injured, while some 200 buildings were destroyed and another 600 damaged. Yet, the Towers were left completely untouched.

“Some people see the Watts Towers as more important than the Statue of Liberty,” Hooks said in a PBS documentary. “She was built by a Frenchman and floated in. This is the American Dream. One immigrant built this all by himself.”

Watts Towers is now a National Historic Landmark that, according to the California Department of Parks and Recreation, attracts some 40,000 visitors annually, the majority of them from out of town. The Watts Towers have been cared for by the Los Angeles County Museum of Art (LACMA) since a partnership was established between the museum and the city in 2010.

Anyone can view the Towers from outside the fence at any time, though guests who’d like a guided tour (also outside the fence) will have to adhere to the Thursday through Sunday tour schedule.