Why Are Tons of Great White Sharks Gathering in the Pacific Ocean? 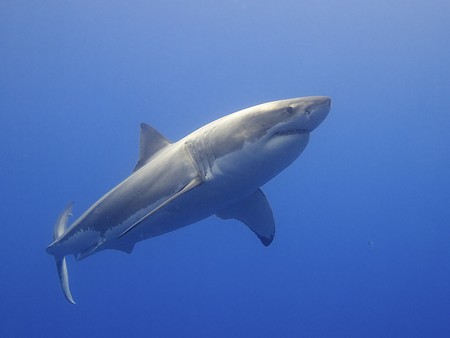 The gathering has been likened to Burning Man, but for sharks.

For the past 20 years, scientists have been tagging great white sharks in the San Francisco Bay area to observe their behavior. And during this period, they’ve noticed the sharks acting in a very mysterious way.

Every year, the white sharks swim 1,200 miles off the coast of California to a remote area in the Pacific Ocean, about halfway between Baja California and Hawaii. Great white sharks are typically considered solitary creatures, but hundreds of them congregate in this patch of ocean, which is about the size of New Mexico.

It’s such a popular migration spot that scientists dubbed it the White Shark Café, predicting that it acts as either a feeding or mating hotspot. But what really goes on there?

“I think of it like Burning Man,” Salvador Jorgensen, a research scientist at the Monterey Bay Aquarium, said in a press release. “You have all these Bay Area white sharks, and every year they head out into this White Shark Café, out into the desert of the ocean—and we’re not exactly sure what they’re doing out there.”

To learn more, a team of scientists, led by Stanford marine biologist Barbara Block, set out on April 20 for a month-long voyage to research the area.

At the White Shark Café, the team witnessed further bizarre behavior from the sharks. About every 10 minutes, the males dived to 1,000 feet deep before resurfacing. Females, on the other hand, dove deep during the day and stayed in shallow waters at night.

“The male white shark and the female white shark are doing completely different things, and that’s not something we’ve seen so much before,” Block told NPR. “We have to spend some time studying these behaviors to try to understand if this is courtship behavior or is this really a feeding or foraging behavior.”

While previously taken satellite images led scientists to believe the area was an ocean desert, they found it swimming with diverse sea life, such as fish, squids, and jellyfish. The team is now in the process of analyzing the data they collected to get a clearer picture of the physical, chemical, and biological make-up of the White Shark Café.

“The research illustrates how little we know about our planet,” Block told Stanford Magazine. “One of the most iconic sharks on earth is half of the year in the open ocean—these ecosystems we actually know little about.”