Let’s start with the hard truth: You will not be able to see everything at the Los Angeles County Museum of Art (LACMA) in one visit, seeing as the vast collection is comprised of 120,000 objects displayed in six buildings over a 20-acre campus. But if you go in with an idea of what you want to see (or at least what you don’t), you will walk away feeling like your time and your admission fee were well-spent. With that in mind, here are some essential exhibits and features you won’t want to miss during your trip to LACMA. 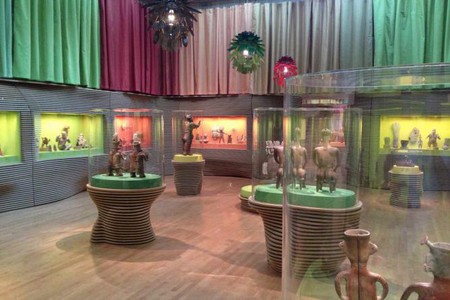 Art of the Ancient Americas | LACMA

Art of the Americas Building

Not surprisingly, this building features art from North, Central and South America. The top floor contrasts art and artifacts of the Ancient Americas with a bold modern display space. The second floor features a broad collection of American objects from the colonial era to the present day, with a particular emphasis on California arts and crafts from the 30s through the 60s. Of particular interest is a large painting called Burn, Baby, Burn by Matta, inspired by the 1965 Watts riots.

This building is also home to an interactive exhibit called ‘Faces of America: LACMA Collects‘, which includes a series of portraits from history, as well as selfies submitted by LACMA patrons posing with various artworks, in order to explore American diversity.

The Hammer Building houses LACMA’s collection of African and Asian art, tools, weapons, textiles and ceremonial figures. Even if ancient artifacts aren’t your thing, there are a couple of impressive exhibits that are worth a pass through the building. Assyrian and Egyptian stone reliefs are breathtaking in their size and intricacy. So is contemporary Ghanaian sculptor El Anatsui’s giant work entitled Fading Scroll, which resembles an ornate African textile, but is actually made of scavenged aluminum packaging and copper wire. 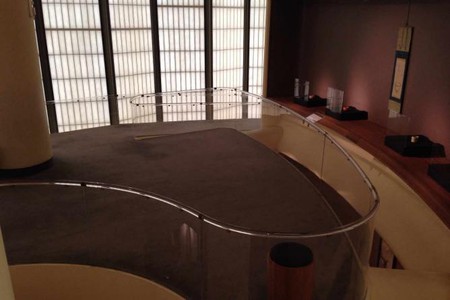 The Pavilion for Japanese Art

The Pavilion for Japanese Art is the furthest away from the underground parking lot, so it’s easy to miss. But that would be a mistake. Even if you’re not fascinated by the intricacy, subtlety, serenity and variety of Japanese art, the building itself is an artwork that you owe it to yourself to experience.

Incorporating Japanese influences like bamboo mats, river stones, and natural light filtered through paper screens, the Pavilion’s vaulted ceiling and gently sloping and meandering paths are a welcome respite from the linear mazes of the rest of the museum. If the exhibits in the other buildings start to blur together, head to the Pavilion to center yourself.

LACMA’s collection of outdoor sculptures ranks among the most popular photo opportunities in the city. Michael Heizer’s Levitated Mass allows you to walk under a 340-ton boulder, while Penetrabile by Jesus Rafael Soto is an irresistible kid magnet of swaying plastic noodles in front of the Ahmanson Building. You will also recognize Urban Light, by the late Chris Burden, from every Angeleno’s Facebook feed and online dating profile ever. 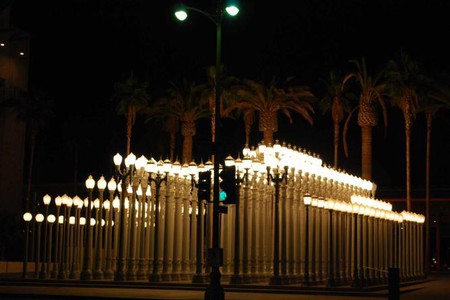 LACMA has several options on campus for when you start to get hungry, including a coffee bar, a café and a pricey bar/bistro. But this is Los Angeles, and if your lunch didn’t come off the back of a truck, you’re doing it wrong. Fortunately, a small armada of gourmet food trucks park daily on Wilshire Boulevard opposite the museum to cater to patrons and office workers. From late morning to late afternoon you can find anything from good old-fashioned deli sandwiches to vegan Korean tacos at pretty reasonable prices. Once you get your food, the museum has plenty of outdoor seating in the shade, or you can head over to the lawn of the adjoining Page Museum for a sunny California picnic.

The Ahmanson is probably closest to the conventional idea of a city art museum, and it’s the building you are likely to spend the most time in. It features classical sculptures, pre-Raphaelite religious art, Renaissance pieces and works by both European masters and American artists up until the present day.

You’ll find dark and detailed Dutch landscapes, bronze sculptures by Rodin and Degas, some of Monet’s water lilies, a sizeable collection of Picassos and one of Warhol’s famous soup can paintings. Make a point to see George de La Tour’s heartbreaking The Magdalen with the Smoking Flame and Hubert Robert’s massive Stair and Fountain in the Park of a Roman Villa.

The top floor features Buddhist art from India and Asia, as well as Islamic art. Some of the pieces are nice, but if you are looking for Buddhist art, you should really take a trip up to the Norton Simon Museum in Pasadena. ‘Islamic Art Now’ is the exhibit you shouldn’t miss. It is a small but fascinating collection of photography, sculptures and mixed media pieces, many of which examine the identity of women in cultures straining under the competing pressures of tradition and modernity.

The Broad features art from currently active or recently deceased artists, which means the exhibits change frequently. Exhibits typically focus on a single artist or movement, and can include anything from large sculptures like Richard Serra’s massive Band to lighting installations to photography to painting and mixed media. It’s worth at least a quick trip through to see what’s going on in the contemporary art world; you never know when you’ll find something that will capture your imagination.

One permanent exhibit not to be missed if you are visiting with kids is the late Chris Burden’s kinetic sculpture Metropolis II. This large mixed-media cityscape features Hot Wheels cars and model trains on constant busy circuits that can be viewed from any angle. The sculpture only runs during certain hours, so check the schedule before you go.

The Resnick is LACMA’s home for touring exhibits, which gives you the opportunity to see art not only from other American museums, but also from institutions all over the world. Admission to these exhibits does cost extra, so check LACMA’s website or with the ticket counter to see if the current exhibit is something you’re interested in seeing.