Top 10 Things To See And Do In The Presidio

Before San Francisco became the heart of the tech boom, before it served as the gathering place of counter-culture movements, it was known for its military stronghold called the Presidio. This National Historic Landmark District in the shadow of the Golden Gate Bridge is where San Francisco began. Today it offers a rich history, inspired architecture, and stunning views, as well as endless things to do and see. 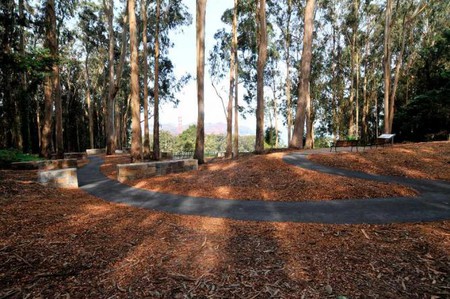 Courtesy of The Presidio Trust

Take a walk or ride your bike along the Presidio Promenade, a paved 2.1-mile trail that cuts through the northeast section of the national park. The easy pathway begins at the historical Lombard Gate – the traditional entrance to the Presidio, which has been restored to its 1896 look – and ends at the foot of the Golden Gate Bridge. Wind your way through woods filled with fragrant flowers, passing by the finest collection of military architecture in the country. The park’s 790 buildings range from ornate officers’ quarters to surprisingly elegant barracks, as well as air hangars and stables.

Also along the Promenade, take note of plaques commemorating legendary military events and people, including the brave African-American soldiers who, in 1866, were formed into four regiments known as the Buffalo Soldiers.

Take in historic locations like the San Francisco National Cemetery – the first cemetery for military veterans on the West Coast, and what may be the most beautifully scenic final resting place in the country.

Off The Grid Picnic and Twilight at the Presidio

The Presidio can require a lot of walking to enjoy all its wonders, so you will need some sustenance. There’s no better place to please your palate than at an Off the Grid Picnic every Sunday on the Main Post lawn from 11AM to 4PM, March 1 to November 1.

If sunset is more your thing, Off the Grid returns for its relaxing Twilight gathering from 5 to 9PM, April 1 to October 29. Twilight offers the same delectable food, as well as lantern-lit cabanas with cocktail service, cozy Adirondack chairs, romantic fire pits, and live music.

The Presidio Officers’ Club was established in 1776 by Spanish explorers, and has served as a gathering place for the military throughout the 20th century. And if you’ve ever wanted to visit the Presidio Officers’ Club, there’s no better time: the club is spending the fall of 2015 celebrating its one year re-opening anniversary following a three-year rehabilitation project. Since it re-opened in October 2014, more than 25,000 visitors have taken in the club’s 200 free events each year. On the schedule you can find live music and dance performances, arts and crafts for kids, and historical documentaries followed by lectures. Free events are offered Thursday and Friday nights in the beautifully renovated Moraga Hall.

Be sure to explore the Letterman Digital Arts Centre at One Letterman Drive. There you’ll find a 23-acre site that used to be the Letterman Army Medical Center. The site was re-opened in 2005 after being redeveloped by George Lucas Films, and is now home to Lucasfilm Ltd., Industrial Light and Magic, LucasArts, and the George Lucas Educational Foundation. The campus’s new incarnation explains the surreal collection of Star Wars memorabilia among its serene nature. Visitors can find a fountain topped with larger-than-life statue of Yoda at the main entrance at Building B. Inside the main building, a majestic statue of Darth Vader is surrounded by numerous items that Star Wars fans will recognize from the popular films. Outside its walls is a sprawling, 17-acre park designed by famed landscape architect Lawrence Halpern, featuring beautifully landscaped public walkways, a flowing creek, a lagoon, and magnificent views toward the Golden Gate Bridge and the Palace of Fine Arts.

The Palace of Fine Arts

Book Now
The uniquely beautiful Palace of Fine Arts is not to be missed. Walking around the pond full of wildlife surrounded by replica Roman columns, massive statues of weeping women reminiscent of goddesses, and a centerpiece grand domed rotunda evokes wonder and solemnity. And that’s just what it was supposed to do when it was conceived as part of the 1915 Panama Pacific International Exposition.

It was a time of turmoil for San Francisco, which was rebuilding after the devastating earthquake of 1906, as well as for Europe, where economic and political crises were about to launch World War I. The 1915 World’s Fair was meant to bring all Western nations together to encourage trade and envision a future brighter than anyone could imagine.

The fair’s buildings were never meant to be permanent, but the Palace of Fine Arts inspired a movement to save its structures. In 1960, it reopened after a privately-funded project completely restored the site to make it permanent. In 1970, the Palace of Fine Arts Theatre opened, and today showcases a wide variety of performances, arts and film.
Open In Google Maps
3601 Lyon Street, Marina District, San Francisco, California, 94123, USA
+14153761704
Visit Website
Give us feedback 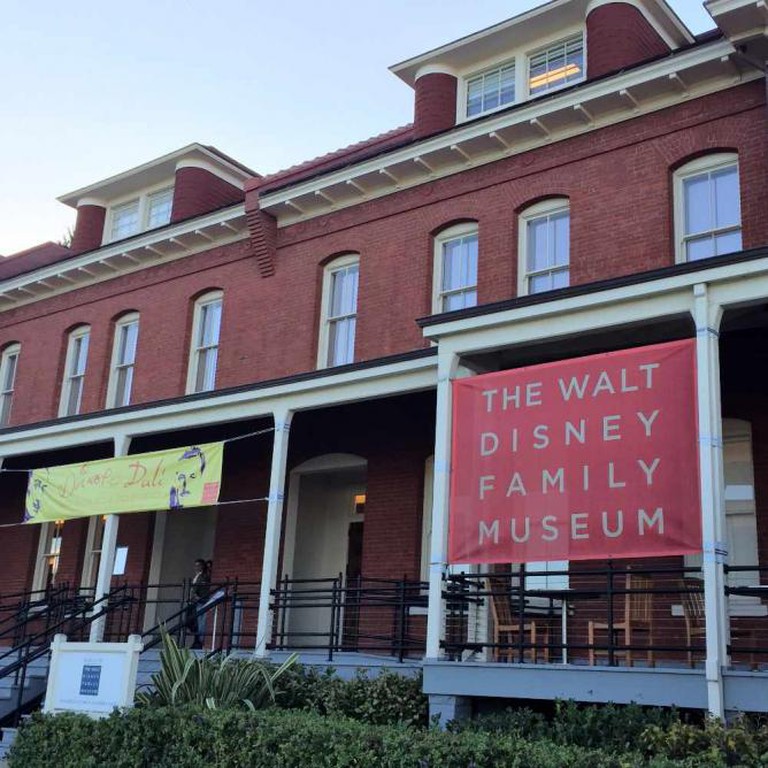 Crissy Field, San Francisco | Courtesy of Sylvie Sturm
The former military airfield known as Crissy Field is the most popular attraction in the Presidio. Locals and visitors return time and again to picnic on its West Bluffs, walk or jog along its waterfront pathway, watch marine wildlife and rare birds feeding in its restored marsh, and visit historic airfield hangars. The coastline also provides the best views of the infamous Alcatraz Island, giving visitors a chilling idea of just how close its notorious prisoners were to this vibrant city.

Also a must is the Farallones National Marine Sanctuary Visitor Center. Learn about the organization’s efforts to maintain an enormous marine ecosystem north and west of San Francisco Bay, which serves as a feeding and breeding ground for a vast diversity of endangered species and marine mammals like whales, sea lions, and sharks. For more program information or to schedule a visit, email Visitor Center manager Kirk McLaughlin or call, extension 308.

A description of Crissy Field would not be complete without mentioning the annual Fleet Week Air Show. A million fans gather at Crissy Field each year to watch pilots perform death-defying acrobatics in machines as sophisticated as F/A-18 Hornets and as historic as bi-planes.
Open In Google Maps
1199 East Beach, Presidio of San Francisco, San Francisco, California, 94129, USA
+14155614323
Visit Website
Give us feedback

Among the Presidio’s non-military gems is The Walt Disney Museum. Immerse yourself in the world of imagination that spawned generations of joy for kids. Walt Disney’s animation is just the tip of the iceberg when it comes to the creative genius’s work. Founded by his daughter, the museum showcases Disney’s influence on pop culture through interactive galleries, 200 video screens, listening stations, and the Learning Center. Animated shorts are screened six days a week at a Fantasia-themed theater.

Make sure to check out the schedule beforehand to catch your favorite special event. Until January 2016, you can learn about the special friendship between Disney and Salvador Dali, one of the great surrealist artists of the 20th century.

Don those ugly (yet hip!) bowling shoes for a chance to bowl a perfect game at the Presidio Bowling Center. Open nearly all the time – from 9AM to midnight Sunday to Friday and 9AM to 2AM Saturday – the Bowling Center is all sorts of old school fun, starting with its 12 lanes that are framed by a psychedelic mural. You can also compete for glory in foosball and pinball, alongside more modern video games. In keeping with its early morning opening hours, a cozy – and licensed – diner offers a full breakfast as well as your typical bowling hall menu or burgers, hot pastrami sandwiches, and chicken wings – all reasonably priced to round out the family-friendly vibe.

Good news! The Presidio Golf Club, with its rolling green grounds covered in fragrant eucalyptus and Monterrey pine trees, is open to the public. Founded in 1895, the 18-hole course that was once reserved solely for military officers’ use now welcomes resident and non-resident members to enjoy its unique natural surroundings and inspiring vistas.

The club employs sustainable practices to preserve grounds, home to wild animals such as the gray fox, red-breasted sapsucker, and American coot. The 12th hole is the site of a completely independent weather station that tracks evaporation in order to eliminate unnecessary watering at its 1,100 sprinkler heads. Water used for maintenance is also recycled within the system as gray water. Benches and signposts are made entirely of recycled plastic materials. And chopped bits of used tires known as crumb rubber serve as shock absorbent underneath turf to slow down wear and tear.

The club also offers a relaxing pub and restaurant, as well as a fully-stocked pro shop.

Monastery
Facebook
Email
Twitter
Pinterest
Copy link
Share
Map View
It’s become pretty obvious that the Presidio is teeming with history. But nowhere do you feel you’ve stepped backward in time more than at Fort Point. This brick stronghold was once called ‘the pride of the Pacific,’ ‘the Gibraltar of the West Coast,’ and ‘one of the most perfect models of masonry in America.’ It sits underneath the Golden Gate Bridge’s web of structural beams, under an arc designed specially to protect the Fort.

Its long history began more than 150 years ago, when it stood guard at the Golden Gate narrows as America’s most formidable deterrence to naval attack. The Fort never did see battle, but its significant military, architectural, and maritime history has made it a National Historic Site.

In more recent times, its notoriety peaked again in 1958 as the backdrop to the scene in Alfred Hitchcock’s classic 1958 suspense thriller Vertigo in which Kim Novak throws herself into San Francisco Bay to the horror of co-star Jimmy Stewart.

You can enter the Fort for free, check out the immense bunker from the inside, and learn about its national importance. With a little research, you could even catch some events like Civil War re-enactments.

But even before the tour begins, adventure awaits along the narrow coastal road leading to the Fort, which involves close encounters with the sea, as it crashes violently over boulders along the shoreline just a few feet below. And if the tide and wind are just right, you can spot another iconic California sight – surfers fighting to ride those powerful waves.
By Sylvie Sturm

Sylvie Sturm is a writer, journalist, and award-winning newspaper editor. Born and raised in Canada, she was wooed by the charms of San Francisco and has made it her mission to uncover every aspect of this spectacular city. When she’s not on the hunt for the next film festival or farmer’s market, she’s most likely with her husband, rock climbing on Bay Area cliffs overlooking the Pacific Ocean.
Open In Google Maps
Presidio of San Francisco, San Francisco, California, 94129, USA
+14155042334
Visit Website
Give us feedback
Give us feedback