Top 10 Things to Do in SoMa, San Francisco 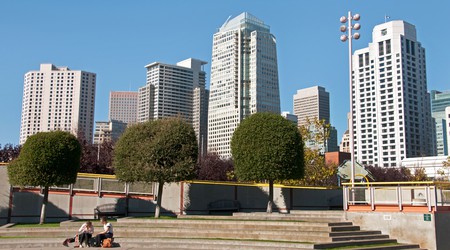 San Francisco’s South of Market neighborhood (otherwise known as SoMa) has transformed over the past twenty years from a manufacturing district to an area offering everything from art and sports to theater and virtual reality.

SoMa was once an industrial zone, with block after block containing little more than warehouses. An influx of new, moneyed residents and the introduction of a vibrant arts scene have replaced blue-collar industry with condos and entertainment. Here is where to visit in the transformed neighborhood.

Go to a museum, or three

The San Francisco Museum of Modern Art became the first major museum to operate in SoMa when it opened in 1995 on 3rd Street. SFMOMA is a world-class arts institution with a collection that spans from the Modern era (circa 1500- 1800) through to today. Recent special exhibitions have included shows examining the careers of luminaries Rene Magritte and Wayne Thiebaud. The other major museums in the area are the Contemporary Jewish Museum (CJM) and the Museum of the African Diaspora (MoAD). Going to all three in a single day is daunting, but possible if you’re after a quick browse and a few snaps to show you were there. 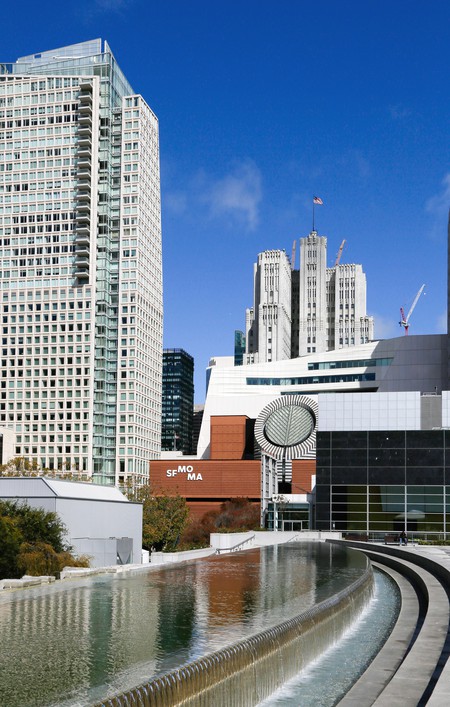 Cheer at a Giants game

Giants games tend to bring out the best in San Francisco. The city cherished their baseball team long before the current incarnation that created a World Series dynasty. Whenever the boys in orange are in town, residents are ready to throw down. AT&T Park is on the border of SoMa and Mission Bay, but the distinction doesn’t really matter on game day when the streets of SoMa come alive with the sounds of baseball and camaraderie. Whatever team you usually root for, show some San Fran pride and try cheering on the Giants with everyone else. Whether you’re in the stands, or in a standing-room-only bar, you’ll feel right at home. 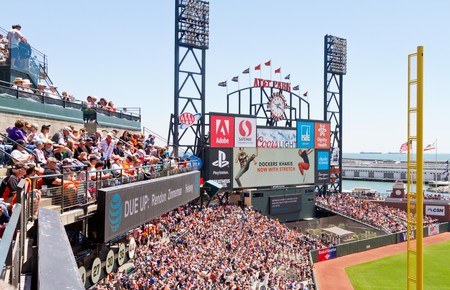 Ice skate any time of the year

SoMa just so happens to have the only year-round ice rink in San Francisco. Seven days a week, the Yerba Buena Ice Skating & Bowling Center is open to any and all who want to don skates and feel the rush of gliding over ice. General admission is $12.50 plus $5.50 to rent skates. Be sure to check if the rink is open for public skating, as it’s regularly booked for private events. While much of the other entertainment in SoMa is geared towards young partiers, Frozen Fridays at the rink from 9.30pm to 11pm features mellower events such as disco and movie-themed nights. 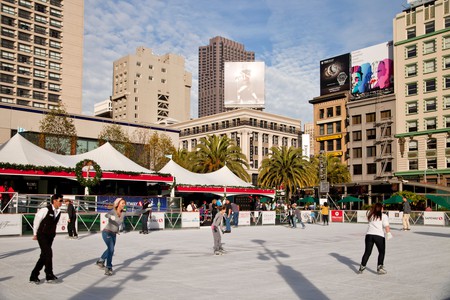 Crown Point Press is a Bay Area institution located in the heart of SoMa. The press isn’t open to the public, save for the shop. However, they do host an intensive workshop every year that will teach you everything you need to know about etching. It’s a four-week engagement taking place 9am to 5pm Monday through Friday. Tuition is $1,800 per week, but diligent work means you come away with your own limited-edition custom prints. There’s a lot of art history here, as Crown Point has hosted many of the Bay Area’s most prominent artists such as Richard Diebenkorn and William T Wiley. 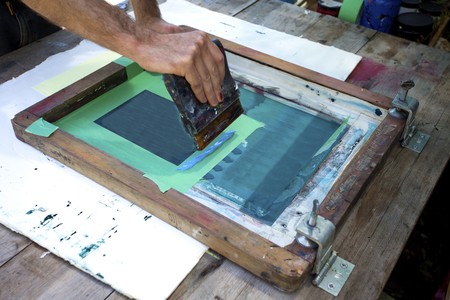 The Barbary Coast was once San Francisco’s red light district. Brothels and dance halls lined the streets and did big business until they were eradicated in the middle of the 20th century. The remnants of the area can be discovered today at the Barbary Coast Trail, located along a narrow street that branches off Market and heads into the Tenderloin. The sidewalks are studded with bronze markers that signpost the way for visitors to follow and learn about the area’s past. History buffs will relish the chance to retrace these steps, while everyone else can duck into the boutiques and bars dotted along the way. 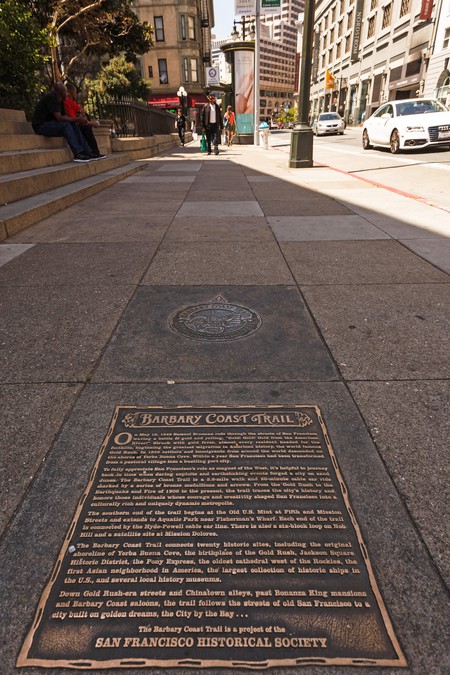 Have a drink at a hyperlocal brewery

San Francisco is a craft brewery haven and the brewers located around SoMa give a good introduction to the evolution of the trend in the city. Popular newcomer Fort Point has a tasting room at the Ferry Building, where visitors can try their uncomplicated tipples. Cellarmaker Brewing Co. on Howard is another hop lover’s paradise and Black Hammer Brewing, across the street from AT&T Park, ferments flavorful small-batch beers. If all you want is a simple brewpub, head over to 3rd Street Tap Room. You can try a wide variety of local beers without having to dart from one brewery to the next, and soak it all up with a pizza. 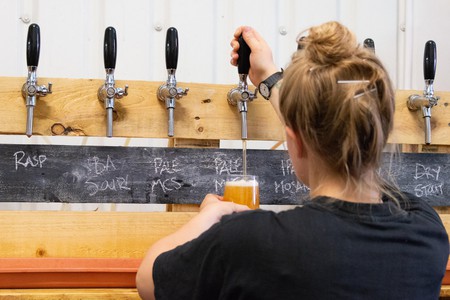 The SoMa area is home to a host of inventive craft breweries | © dianajarvisphotography.co.uk / Alamy Stock Photo

Party all night with AsiaSF cabaret

AsiaSF is famous for cabaret dinner shows, and the organization prides itself on starring transgender performers. Billed as a one-stop party, these extravaganzas feature hours of pumping music and perfectly timed choreography accompanied by Asian-inspired dinner fare and cocktails named after the acts. Reservations are encouraged, and large parties (with more than six people) are offered a choice from three family-style menus. Fridays and Saturdays have multiple seatings and snap-happy patrons will be pleased to hear that photos and videos are permitted. Downstairs holds an after-hours club with a dance floor so the party can continue into the small hours. Anyone who leaves AsiaSF feeling like they didn’t get enough of the performers should look for Transcendent, a docuseries on Fuse about the club’s dancers. 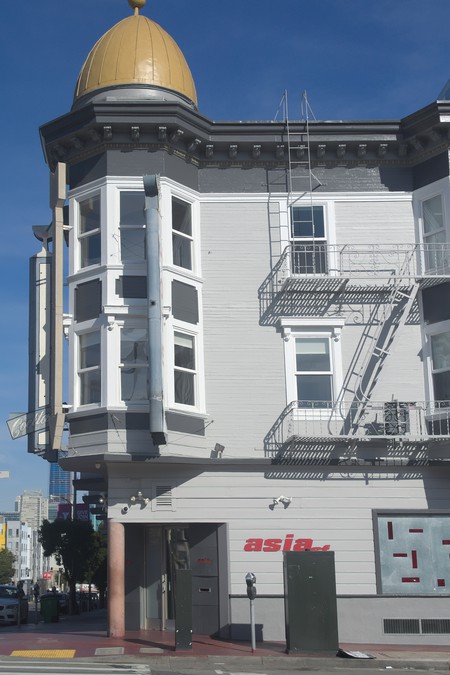 Grab your running shoes for Bay to Breakers

Every May, parts of San Francisco shut down for the Alaska Airlines Bay to Breakers 12K. The race has been a city tradition since the inaugural run on January 1, 1912, when residents sought a way to show the world they had moved beyond the tragedy of the 1906 earthquake and fire. Today, it’s one of the world’s largest foot races and regularly draws crowds of more than 150,000. The race is perhaps most famous for its racers’ wild costumes. Pictures from Bay to Breakers past reveal bright and bold wigs, elaborate make-up and cosplay to rival Comic Con. If you want to participate and are traveling from outside the city, be sure to book your accommodation well in advance as hotels and Airbnbs are almost always at max capacity for this event. 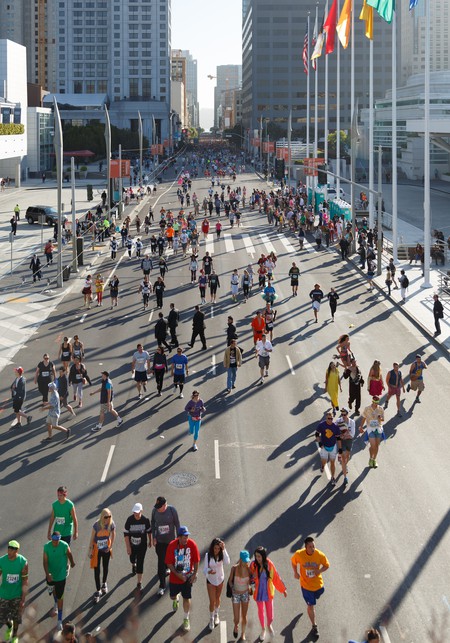 Augment your reality at Onedome

Onedome uses leading techology and a whimsical aesthetic to create participatory art shows in the heart of SoMa. The venue’s LMNL experience is composed of 14 rooms that feature interactive light and sound exhibits, while The Unreal Garden is a whimsical utopia of strange plants and creatures that come alive after visitors don special glasses that use augmented-reality technology. The creatives behind the project are no joke. The audio, for instance, was created in part by sound artist Alex Stahl, who has previously been employed as a rocket scientist, and a sound designer for the Kronos Quartet. Onedome itself is a thought-provoking place, but the real excitement comes when the show is over, and visitors are left to wonder what the next iteration of this type of entertainment could be.

Say “Yes, and…” to Leela Improv

The improv troupe at Leela has been providing San Francisco with quality comedy since 2011. Every Monday and Thursday, Leela’s master thespians share their expertise in the comedic arts during a two-hour drop-in class for beginners, experts and everyone in between. Past core members have joined lauded troupes as The Second City, Upright Citizen’s Brigade and The Groundlings, so you’re learning from the pros. Each drop-in class accommodates a maximum of twenty students, so everyone gets a turn at stretching those creative and comedic muscles. Leela is a great example of that collaborative spirit that has kept the city together through good times and bad. More importantly, it offers the perfect excuse try something new. 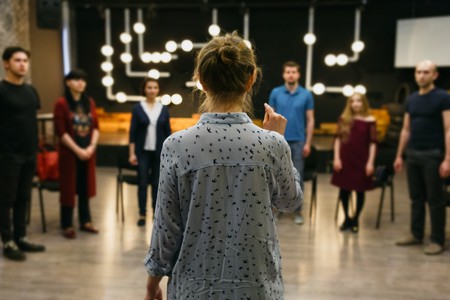