The World of Charles Schulz in Sonoma County, California 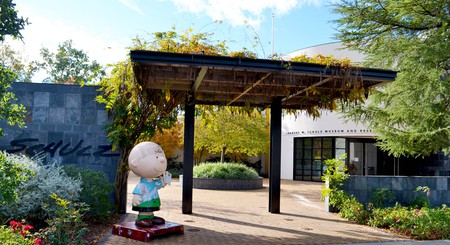 An hour north of San Francisco lies the bountiful land of Sonoma County, California. Dotted with thousand-year-old redwood trees and blessed with wild Pacific coastline and undulating vineyards, Sonoma County is a sanctuary for surfers, wine lovers and outdoor enthusiasts. But in the heart of California’s wine country – nestled within Santa Rosa’s sleepy boulevards – lies a world quite different from its natural surroundings: the world of Snoopy, Charlie Brown and the world-famous cartoon Peanuts.

Over the course of 50 years, Charles Schulz – the creator of the iconic cartoon – produced 17,897 strips that were syndicated to over 2,600 newspapers in 75 countries, reaching a total audience of 355 million people across the globe. Though grounded in the world of childhood friends Charlie Brown, Peppermint Patty and Lucy and Linus van Pelt, Peanuts was not childlike. Dealing with universal aspects of the human experience – including its darker shades – the cartoon was a source of sharp insight and wit for people across many demographics.

Schulz moved from Minnesota to California in 1958, eight years after the first strips were published in American newspapers. He made Santa Rosa his home until his death in 2000, setting up a permanent studio there in 1973. An avid skater and hockey player as a child, Schulz brought a piece of his Minnesotan adolescence with him to the Golden State in building Snoopy’s Home Ice – a Peanuts-themed ice rink that was an integral element of Snoopy and Charlie Brown’s world. Today, the ice rink and studio have been joined by the Charles M Schulz Museum and Research Center and the enormous Snoopy’s Gift Shop, creating a charming universe celebrating all things Peanuts. 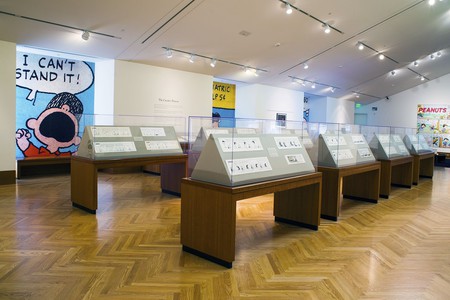 Opened in 2002, the museum was “built on the campus where [Schulz] lived his life,” says museum director Karen Johnson. Ostensibly dedicated to the creator as opposed to his creations, the museum’s design evokes the three core pillars of Schulz’s art: open space, simple black lines and the four squares of the strip. The airy building’s herringbone wooden floors gaze up to a white square-paneled ceiling, while tasteful black-and-white art traces the evolution of Peanuts on the pristine walls. Navigating the spacious, cubic rooms of the museum feels like moving through one of Schulz’s four-paneled strips, bringing visitors into intimate connection with his artistic craft. “Don’t forget about the drawing,” Schulz would always say, according to his widow, Jean Schulz. While Peanuts is revered for its unpretentious wisdom, for Schulz the art was primary.

Across the road sits Snoopy’s Home Ice, a Swiss-style chalet that hosts the skating public as well as numerous youth and adult hockey leagues. Adjacent to the rink is The Warm Puppy Café, where Schulz would eat his breakfast and lunch, sitting at the same table each day. Today the table remains reserved for its only customer, the man whose pencil changed cartoons forever.

The world of Charles Schulz in Santa Rosa has the air of a time capsule. The ice arena and studio’s furnishings are unchanged, while The Warm Puppy Café gently recalls a ’70s diner, serving cheeseburgers and tuna sandwiches in red plastic baskets and Peanuts-themed grease paper. This is Schulz’s world – escapist, carefree and reflective of the non-era that Peanuts itself exists in.

This timelessness of space mirrors the strip’s universality of subject. It deals with core human experiences: failure, embarrassment, ambition, friendship, love. Schulz was arguably the first cartoonist to put character at the centre of the narrative, moving away from the other gag-driven or adventure-led cartoons that were around at the time. “It represents real lives and real people and real actions,” says Jean Schulz. “They were authentic characters. Sparky [Schulz] allowed people to have real emotions.” 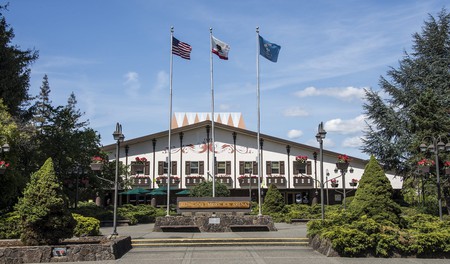 The authenticity of Schulz’s characters is due to how much of himself he poured into them. “If you read the strip, you would know me. Everything I am goes into the strip,” said Schulz. “I am a little bit of all of the characters. I can be cranky Lucy, I am philosophical Linus, I’m insecure Charlie Brown,” Schulz would say, according to his wife. Snoopy, however, remains “pure imagination,” says Jean.

While each character possesses different qualities, they are never overdrawn or overdefined, which means readers channel their own associations into each one. This has allowed the story of Peanuts to travel. The cousin to Santa Rosa’s Charles M Schulz Museum is the Snoopy Museum in Tokyo; the strip has been popular in Japanese culture for decades. Schulz managed to tap into universal human tendencies that connect even the most distant cultures. “It’s a long, long story about a group of kids who interact with each other,” says Jean. “It’s just universal.”

In Santa Rosa, the impact of Charles Schulz’s life and work is palpable. Nearly two decades after his death, the museum and ice-arena complex is a place of vitality, both treasuring the past and innovating for the future. But Schulz’s connection to the city of Santa Rosa is also a spiritual one that goes beyond the built environment. As a boy Schulz had his first illustration published by Ripley’s Believe It Or Not! magazine in 1937 – an illustration of his dog Spike, authored by one “Sparky” of St. Paul, Minnesota. The magazine’s creator, LeRoy Robert Ripley, was himself born in Santa Rosa, California, on Christmas Day in 1890. With a graceful artistic circularity, Schulz left the world in the very place that started it all.