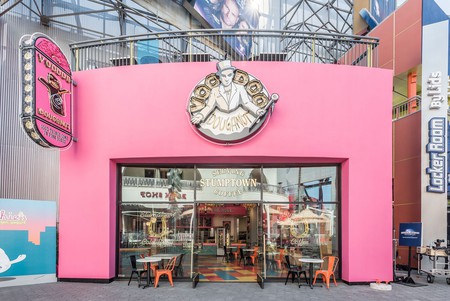 Voodoo Doughnut recently launched their first Los Angeles location at Universal CityWalk, the pedestrian-friendly entertainment district right next to Universal Studios Hollywood. The Portland-based bakery sells brightly frosted pastries in a variety of shapes and flavors, such as the bacon maple bar, the mango tango, and the “grape ape.” (Notably, it seems as though their more profane shapes—the one shaped like a blunt, or the other shaped like a certain human body part—will not make an appearance at this family-friendly outpost.) The new shop regularly boasts long lines of people just waiting for their chance to try a coveted treat. Yet Voodoo began with a couple of guys who hadn’t the first clue as to how to make a doughnut.

Voodoo Doughnut first launched in Portland in 2003 and has since expanded to Eugene, Denver and Austin in the U.S., as well as Taipei, Taiwan. Founders Kenneth Pogson and Tres Shannon came up with the idea after realizing there were no doughnut shops in downtown Portland, Shannon told Culture Trip. The pair learned how to make doughnuts from bakers in Pico Rivera, California. These bakers told them that the key was to not make too many different doughnuts, or else they’d be working against themselves. Pogson and Shannon found this to be true, but they also put their own spin on the desserts they did decide to make.

“We started getting kind of funny with the toppings and such. Bacon, cereal, powders, and most recently…amazing tribute doughnuts that are some of the most spectacular art pieces made on food today,” Shannon said. “We have an array of talented and dedicated employees and artists who make those happen.”

Their aesthetic is macabre, but cute. Their L.A. shop sits in a pink building with neon signage, and the interior features a pale blue and pink counter backed by white subway tiles and a hot pink accent wall that reads, “The magic is in the hole.” Coffins, skeletons, giant voodoo dolls and chandeliers punch up the décor.

“[I]t’s an immersive experience from the moment guests walk into the shop,” Morell Marean, Senior Vice President, Food and Restaurant Operations, Universal Studios Hollywood said. “Everything about the shop is pink, like their famous pink boxes, so on some level, it’s like walking into a delicious box of Voodoo Doughnuts. A towering 12-foot-tall Voodoo Doughnut statue sits just outside the shop to welcome guests because we want our guests to begin interacting with Voodoo Doughnut from the moment they approach the shop.” 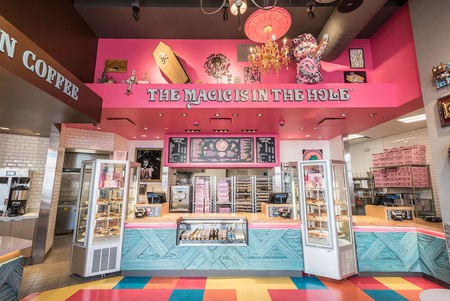 It was this new take on the classic doughnut shop that Shannon credits for Voodoo’s success. In addition to the vivid colors and occult vibes, they’ve also held celebratory parades and Mayoral eating contests. Some people have even tied the knot at one of Voodoo’s outposts.

“I think we have brought a new-found creativity in the doughnut world,” Shannon said. “We basically took nothing from the old model of doughnut shops, other than coffee, milk, 24 hours and the way that you fry and create doughnuts. Our [doughnuts] are special, but not. They are not gourmet.”

In addition to the doughnuts, the menu includes soft serve ice cream, vegan offerings, and Stumptown Coffee. The Los Angeles shop has one new flavor exclusive to the city: The Hollywood Cream, which comes stuffed with cream and topped with maple frosting. 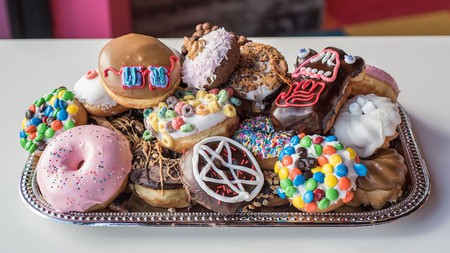 A selection of Voodoo's doughnuts | ©Wonho Frank Lee, Courtesy of Universal CityWalk
Give us feedback