The Best Locations to People Watch in San Francisco

Did that guy just ride down Columbus St. in a penguin outfit on a bike outfitted with Christmas lights? Just another day in San Francisco, and nobody bats an eye in this city of unique neighborhoods and people. The best way to experience the culture of San Francisco, is to sit back and watch it. Here are the best places to watch the comings and goings of the city if you have an afternoon to spare.

If it’s variety and eclectic groups of people from all over the city, then you’ve come to the right place. Looking for some of the most interesting characters to cross your path? Dolores Park is full of different types of communities: bros, goths, hippies, hula-hoopers, slip’n’slide partiers, tech millionaires, dance robots, valley girls, and everything in between.

Set up a blanket, head down the street to bi-rite grocery and pick up some cheese and wine then sit back to watch the madness ensue. You’ll have people playing music, others selling things like truffles and hand-made garments. Most people are incredibly friendly and you’ll often find yourself meeting new friends and groups with other park-goers near you.

To understand the park’s quirks requires some knowledge of its layout. “The Beach” is located on the top right hill, which is host to often scantily clad and fabulous looking men. Down the hills slope, dads and moms usually let their kids run free on the elaborate playgrounds. To the left are the hula-hoopers and tents where people spend the weekends letting loose. Towards the bottom of the hill are wildcards, full of people from the Marina to the Mission.

There is no shortage of games taking place – frisbee tag, hackie sack, corn hole, and even full on character role plays. This gameplay is often among strangers, bringing a sense of community and fun for everyone. Make sure to join in and as a gesture of good faith bring some beer or wine to share with everyone. 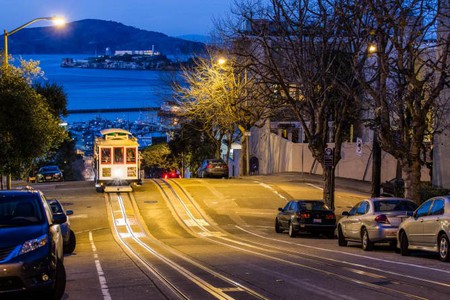 Grab a table any time of the day and sit outside Delarosa restaurant, situated in the middle of Chestnut Street. The eye-catching and interesting pedestrian traffic that speeds down the pavement is enough to occupy the afternoon. This street is a haven of activity for the young professional successes that San Francisco offers. Watch impromptu dog meetings, with all the latest workout clothes, stroller-pushing moms stopping to chat with each other, and hangover victims grab a breakfast burrito at the Marina deli.

You might overhear people chatting about quitting their stable job to join a startup, or which place has the best bootcamp class, or the “worst date” they just went on. It’s a fascinating place to hear the fabric of conversation in San Francisco. Make sure you put on the most comfortable workout clothes and head down the street during the day for some hilarious conversation.

At night, the streets fill with people wearing their best attire for the night to attend their online dates, football games at bars, or young hook-up quests. Occasionally, you’ll see the old married couple, bemused by the activities of young 20-somethings roaming the street in search of love. 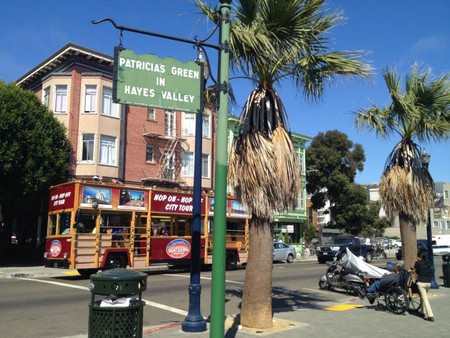 Sit outside and enjoy a coffee in an unusually sunny part of the city and watch the pop-up music concerts, and music listeners entertainers. Sit outside Ritual coffee, grab a nitrous-infused ice-cream, or outside Stacks for some breakfast. There is a Biergarten you can camp out at, enjoy great German beers and food, while watching and soaking in the fun.

Hayes Valley also yields one of the highest dogs per capita in the city and this area has become a huge dog meet-and-greet. Near this area is the Duboce Triangle dog park, so this is often a spot people stop by for coffee of food before venturing a little further south. You’ll find all types of dogs, sometimes without the leash, sniffing everyone and everything. 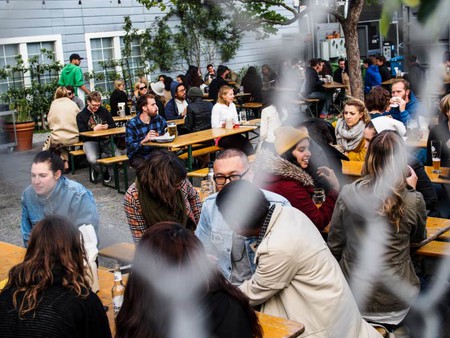 A few other suggestions to sit and people watch for a day are Duboce Triangle dog park, Alamo Square Park, and Washington Park in North Beach.