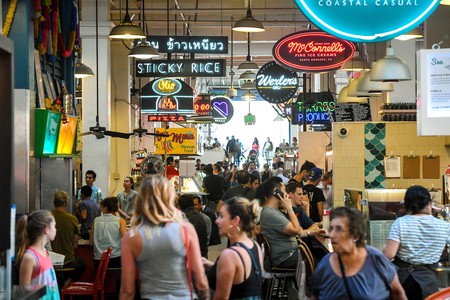 This vibrant market has been in operation for over 100 years, continuously changing to reflect its surrounding community.

When Grand Central Market first opened on Broadway in 1917, the street was at the center of the city’s commercial and entertainment life. LA’s wealthy citizens lived in mansions on Bunker Hill, which sat above the market and Broadway. They would ride the Angels Flight funicular (made famous once again by its appearance in La La Land), down the hill to the market to do their grocery shopping. 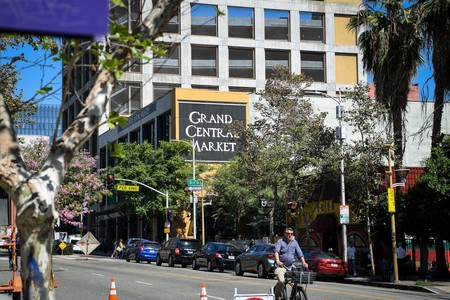 At that time there were more than 90 vendors packed into the space, ranging from fishmongers to Jewish delis and stalls selling dry goods. “Early photos from the market’s opening show shoppers in stylish fedoras perusing elaborately towered fruit sold by bowtied vendors,” writes local station KCET. Even architect Frank Lloyd Wright once had an office building in the space above the market.

But shortly after WWII, the area’s demographics started to change, as the wealthy moved out of the downtown area and into the suburbs. Angels Flight closed in the 1960s, and the mansions on Bunker Hill were converted to low-income housing, before being demolished and replaced by skyscrapers. During all of the changes, the market remained open, altering what it sold (and at what prices) to reflect the demographics and needs of the local community. 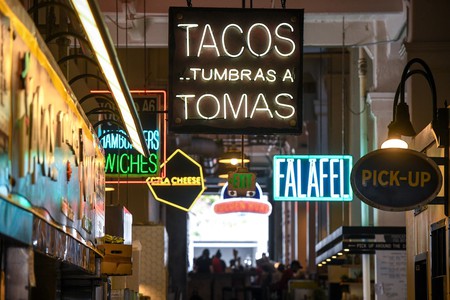 “When I first came to the market was 1972, and it was very different, we’ve seen many changes,” Tomas Martinez of Tacos Tumbras a Tomas told KCET. “Before we had maybe 80 percent Hispanic people, and now, it’s maybe 20 to 25 percent. We see a lot more people from all over. I think it’s the most important place in Los Angeles.”

In 1984, local developer Ira Yellin bought the market, along with other iconic downtown buildings, including the Bradbury building, with the aim of restoring and preserving the area.

Since then, the Grand Central Market has faced problems, particularly during the recessions in the early 1990s and 2008. But today, the 30,000-square-foot arcade is home to more than 30 vendors. In 2014, the market as a whole was named one of the best restaurants in the country by Bon Appétit. 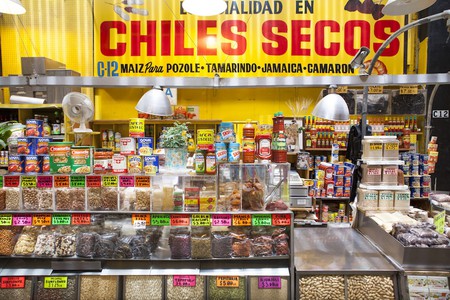 More than two million people visit the market each year, eating at places like breakfast favorite Egg Slut, or shopping for ingredients at longtime vendor Chiles Secos. “The current tenants reflect both the market’s recent past as a place to buy inexpensive produce and hog maw tacos and its evolution to a more gentrified food hall selling pressed juice, artisan bread and craft beer,” notes the LA Times.

As for the future of the market? In November of 2017, it was sold to Adam Daneshgar, president of Langdon Street Capital, who plans to preserve the market’s essence, while providing some minor renovations. “We just want to safeguard this place,” Daneshgar told the LA Times. “We are not looking to go in and change or overhaul anything.”