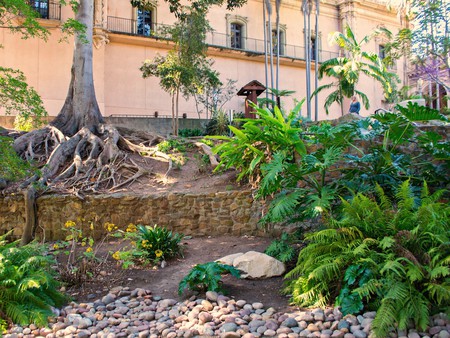 Today, Zoro Garden, a six-acre sunken garden in Balboa Park, comes alive with butterflies. Yet in the 1930s, it was home to a nudist exhibition. Intrigued?

Like much of Balboa Park, Zoro Garden was originally developed for the Panama-California Exposition in 1915, which celebrated the opening of the Panama Canal. The Pacific International Exhibition, an effort to promote San Diego in the midst of the Great Depression, would take place in the same location two decades later (1935–1936). 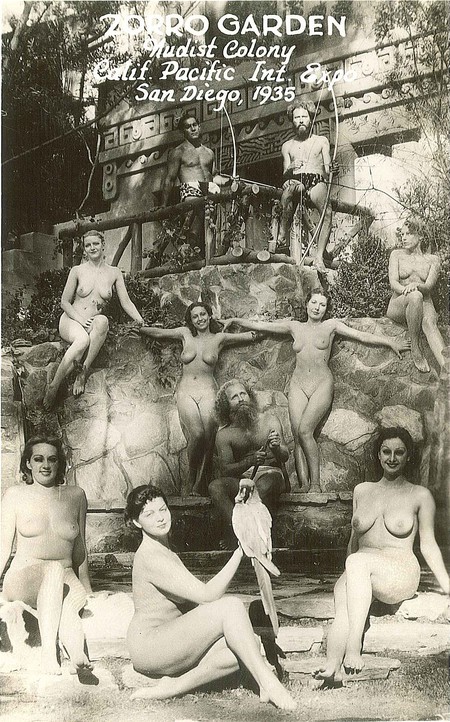 The Zoro Garden nudist colony was created by sideshow promoter Nate Eagle and his partner, Stanley R. Graham. According to marketing materials distributed at the time, the exhibit would feature “healthy young men and women, indulging in the freedom of outdoor living in which they so devoutly believe” who had “opened their colony to the friendly, curious gaze of the public.” Visitors paid ¢25 to sit and observe the nudists, who mostly consisted of women in G-strings and men in loincloths living a fairly peaceful life in their mock community. They played various outdoor games, such as volleyball, and enacted a religious ritual called the “Sacrifice to the Sun God” several times a day. Cheapskates could observe the nudists through peepholes drilled into a wooden fence. Yet even with free peeps, the controversial exhibit was one of the most profitable.

There has been some dispute as to how naked the residents of the colony actually were. Historian Matthew Alice wrote in the San Diego Reader that they wore snug, flesh-colored body stockings that mimicked nudity, while others have pointed to photos and videos of the event that seem to show nude body parts jiggling freely.

According to Welton Jones, a former San Diego Union-Tribune drama critic who researched the event, the first star of the show was 22-year-old Yvonne Stacey, who went by Queen Zorine. She was eventually replaced by 19-year-old Florence “Tanya” Cubitt after Stacey resigned and took her nude act on the road. Jones told 10 News that Cubitt attended press junkets and completed interviews in the buff.

“For the rest of the year, reporters sought Tanya out on a slow news day,” Jones says. “She told the San Diego Sun about avoiding bees, about posing for artists.”

Joseph Mitchell, a reporter for The New Yorker, interviewed Cubitt in 1936. As recounted in Mitchell’s My Ears Are Bent, Cubitt wore nothing but a blue G-string and told the reporter about how four of her eight sisters had also worked at the nudist colony.

She also invited burlesque performer Sally Rand to have a naked hang, but Rand apparently declined, saying, “The nude is my business suit. I never appear socially in it.”

Parkeology, an arts group led by artist Kate Clark, decided to host a variety of events that explored the “lesser known sties and stories” of Balboa Park. One of these events, held in May of 2016, recreated the Zoro Garden Nudist Colony. Performers wore flesh-colored body suits and acted out a pageant written by Jones.