Most people associate the name DeLorean with the time-traveling car from 80s movie Back to the Future, not surprising considering the automaker went out of business in 1982. Now the nephew of the original creator of the DeLorean is designing his own car, and this one won’t need roads where it’s going.

Paul DeLorean is working on a two-seater vertical takeoff and landing personal air transport vehicle, which put more simply, is a flying car. In a recent interview with Wired, DeLorean said he’d been working on the vehicle since 2012.

The idea of a flying car may seem like science fiction, but DeLorean is not the first to pursue the idea: the likes of Uber and Airbus are also working on projects. The DeLorean version of a flying car is nearly 20 feet long and 18.5 feet wide, and its wings tuck in at the sides. The car is electric, and the L.A.-based company eventually wants to make it self-flying. 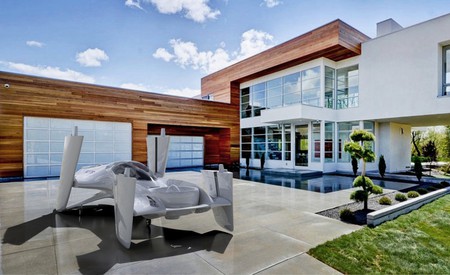 The flying car at home | © DeLorean

Although DeLorean is still in the research and development phase, the company has built two scale models. One of these was just 30 inches long, but the other one was one-third of the final size. “We are moving forward on a full-size, piloted prototype which will carry two passengers and is designed to operate, fully electric, for a range of 120 miles,” says DeLorean in the Wired interview.

In February, the government of Dubai announced it was trialing an autonomous aerial vehicle built by Chinese company EHANG. At the time, transport chiefs believed the flying car could be in use as early as July, although no flying cars have been sighted this summer so far.