Getting Your Fixe: The Best Prix Fixe-Only Restaurants in LA

Casual prix-fixe only restaurants may seem like an oxymoron, but they are slowly becoming essential LA dining in this ever-growing food landscape. It was inevitable that the importance of finding the right chef for the right restaurant would evolve into that chef creating a ‘tasting menu only’ experience. Rather than choose from seemingly limitless options on your own, these menus are designed to let you relax and let the chef guide you through culinary explorations. 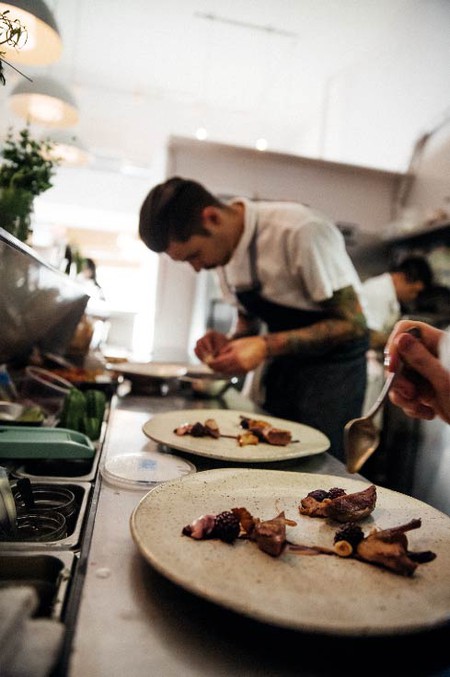 The trend goes hand-in-hand with ‘farm to table’ seasonality that is also of major concern these days. With monthly (as at Maude) or daily (as at Trois Mec) changing menus, chefs are able to use the ingredients peaking at the proper time, making the menus feel that much more relevant to diners. However, there were a couple of reasons that these menus were relegated to more upscale climates – price and familiarity.

Prix-fixe isn’t a new idea, yet restaurants with this option traditionally also provide a la carte offerings, so making these tasting menus the only thing available might be seen as a risk. In recent history, only the finest restaurants have dared to offer 10-12 course tasting menus with wine pairings, because only the upper crust of society could afford such experiences.

Diners were previously less accustomed to eating foie gras or sweetbreads that are so often utilized with meals of this calibre, featured in order to round out the experience and offer flavor profiles far beyond what diners are used to. Picky eaters must beware when dining at the places featured here, but everything is worth trying once and these particular restaurants serve delicious meals with seemingly effortless finesse.

Restaurant, American, $$$
Facebook
Email
Twitter
Pinterest
Copy link
Share
Map View
Proving he can put the ‘chef’ into ‘celebrity chef’ and not the other way around, Curtis Stone is doing special things at this 25-seat gem on Beverly Drive. Named after his grandmother, naturally Maude is an extension of Stone’s soul and the food tastes like it. The restaurant couldn’t possibly be more seasonal, as each month, Maude highlights a single ingredient and then cooks an 8-course dinner using said ingredient – you will not believe the ways he transforms the flavor profiles of each ingredient to push the limits of normal culinary boundaries. Choose your month wisely, sit back and enjoy. Note – January was the Pomegranate.
Open In Google Maps
212 South Beverly Drive, Beverly Hills, California, 90212, USA
+13108593418
Visit Website
Give us feedback

Josef Centeno’s takeover of the Downtown stretch on 4th Street and Spring is just about complete, with possibly his finest offering to date. Named after his dogs, Josef fuses two unlikely cuisines, Japanese and Italian, to create a menu filled with paradoxes and delights. Risotto is made with sushi rice, thick Tuscan soups are fortified with nori–your mind bends with each astonishing combination. The menu is offered as an 8-course omakase (which amounts to 12 with extras and amuses), 12-course super omakase, and for the less adventurous, a 5-course family-style meal. It’s a deeply personal journey Centeno takes us on, and it’s worth the ride. 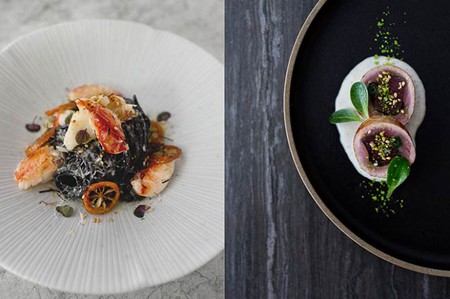 Ludo Lefebvre, Jon Shook, Vinny Dotolo – Trois Mec – ‘The Three Guys’ or better yet ‘The Wise Men.’ This culinary Harlem Globetrotter-esque squad has created a whirling dervish of a restaurant that employs every trick they have learned from the 30+ years of combined experience in the restaurant industry. Ludo is the everyday chef at the restaurant, busting out seven course tastings seamlessly every night – sometimes changing the menu weekly to keep up with the market. Prior to opening, their off-putting ticket system stole much of the conversation, but, gimmicks aside, the food here is remarkable. Ludo might say the cuisine is French but it fails to fall easily into one genre other than ‘modern.’ With only 25 seats in the whole place, it can be difficult to snag a reservation, but do keep trying.

Market, Restaurant, American
Facebook
Email
Twitter
Pinterest
Copy link
Share
Map View
Alma should potentially be relegated to the premium end of the spectrum, with the normal tasting menu costing in the $90s, but they have recently started offering (from Tues-Thurs) a market menu costing $50 for 3 courses. Price aside, this venue is a true wonder in LA and has been lauded as such since it first opened – Bon Appetit calling Alma ‘the best new restaurant in North America in 2013’ as well as Chef Taymor being Food & Wine’s ‘Best New Chef’ in 2014. So whilst this restaurant isn’t necessarily a secret, it should be frequented like a neighborhood restaurant. It exudes warmth and charm from every nook and the food coming out of the kitchen is as soulful (Alma does mean ‘soul’ in Spanish) as it is freshly original and modern.
Open In Google Maps
Los Angeles, California, USA
Give us feedback
Give us feedback