The Coolest Neighborhoods in San Diego 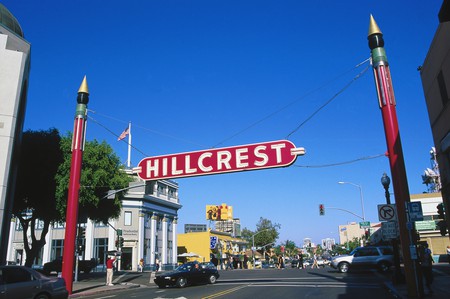 Hillcrest is one of San Diego's many hipster neighborhoods, and the site of the city's annual Pride parade | © Barry Winiker / The Image Bank / Getty Images

San Diego, the second largest city in California, is a diverse place. Want a beachside party? Try Pacific Beach. Want to keep the beach but ditch the party? Try the calmer yet no less beautiful La Jolla. Or head further inland to the hipster shops and restaurants of North Park, or swing by Hillcrest, San Diego’s most LGBTQ-friendly neighborhood. Here’s our pick of the best.

Once a fishing village, Little Italy is now a downtown San Diego neighborhood known for its many excellent restaurants and shops, as well as a bustling farmers’ market, appropriately called the Mercato, open every Saturday from 8am to 2pm. The area also hosts several cultural festivals, including the Sicilian Festival, Taste of Little Italy, Little Italy Festa, and a spring ArtWalk.

Once intended as a lemon grove and recently pegged as a hipster neighborhood, North Park is home to art galleries, craft beer, cocktail lounges, modern restaurants, and trendy shops. Every second Saturday, the area hosts Ray at Night, an evening art walk from 6pm to 10 pm, where guests can visit over a dozen galleries as well as enjoy outdoor performances. Beer lovers should note that North Park is also home to a tasting room for the popular brewery, Modern Times.

Art Gallery
Facebook
Email
Twitter
Pinterest
Copy link
Share
Map View
Barrio Logan sits under the San Diego-Coronado Bridge. In addition to its several art galleries, it’s also home to Chicano Park, which features the biggest collection of Chicano murals in the world. Though there’s usually a line, a visit to Las Cuatro Milpas for authentic Mexican fare is a must. You can follow it up with a beer at Border X Brewing, a Mexican craft brewery that makes a horchata golden stout.
Open In Google Maps
Barrio Logan, San Diego, California, USA
Give us feedback

Visitors to this 16.5-block neighborhood will note its architecture, as the area has nearly 100 buildings, some dating back to the 1800s. The oldest is the William Heath Davis House, built in 1850, which is now a museum. Today, this neighborhood is a highly walkable nightlife district crammed with bars, restaurants, shops, clubs, playhouses, and venues. It’s also quite near another cool neighborhood, the East Village, where the San Diego Padres play at Petco Park.

Museum
Facebook
Email
Twitter
Pinterest
Copy link
Share
Map View
Old Town touts itself as the birthplace of California, as it was the state’s first settlement – a Spanish settlement built in 1769, though, of course, there were people already here by the time the Spanish first became aware of the area in the 1500s. The neighborhood is anchored by Old Town San Diego State Historic Park, where you can find museums, historic buildings, and exhibits on the history of the region. The area also contains a collection of Victorian homes known as Heritage Park, as well as the supposedly haunted Whaley House. Several restaurants sit in Old Town, including Cafe Coyote, where the tortillas are hand-made, and Barra Barra Saloon, home of the best (so they say) $6 margarita in town.
Open In Google Maps
4002 Wallace Street, Old Town, San Diego, California, 92110, USA
+16192205422
Visit Website
Give us feedback

Hillcrest is San Diego’s most LGBTQ-friendly neighborhood and the site of the city’s annual Pride parade since its inception in the 1970s. You can enjoy one of the many restaurants here, including Bread & Cie bakery, Mexican restaurant Lalo’s, Snooze for brunch, and the ever-vibrant, gay burger joint, Urban Mo’s. There are several wine bars in the area too. Balboa Park, home to the California Tower and the San Diego Zoo, sits to the south of the neighborhood.

Tucked between Mission Beach and La Jolla is Pacific Beach, a youthful oceanside neighborhood characterized by spectacular coastline and a buzzing nightlife scene, particularly along Garnet Avenue. This neighborhood is home to the Crystal Pier Hotel, which takes the form of several charming bungalows dating back to the 1930s, on the pier.

La Jolla sits along the coast, north of Pacific Beach. You will likely want to spend a considerable amount of your time outside, enjoying the gorgeous weather. You can hit the beach, explore sea caves via kayak, rent bikes and ride them along the coast, or go whale watching. Make sure you also swing by the Museum of Contemporary Art San Diego, located in the former home of journalist Ellen Browning Scripps.