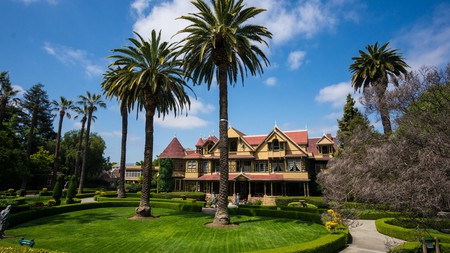 California is nicknamed the Golden State for a reason, but the local appeal extends far beyond sun, sea and celebrities. Those in search of sights more twisted and morose can also get your fix out west. Here’s where to go if you’re craving some darkness to offset the bright lights – as well as the best places to stay just around the corner.

The Museum of Death 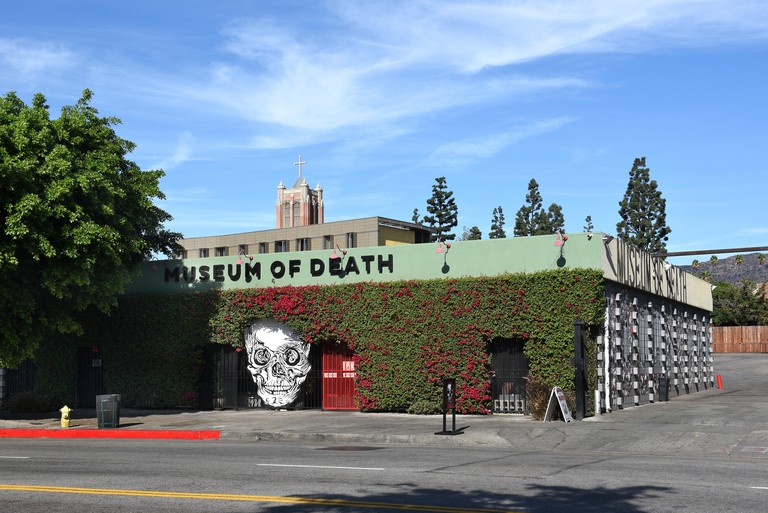 © Steve Cukrov / Alamy
The Museum of Death on Hollywood Boulevard does exactly what it says on the tin. For more than 25 years, this place has been inviting visitors to test their mettle against the most disturbing sights in the city. You’ll find the head of the serial killer, Henri Désiré Landru, in a glass case, a shrine to the Heaven’s Gate cult (who committed mass suicide in 1997), as well as photos of Benito Mussolini post-execution. The owners even claim that several have fainted while visiting, so this is certainly not an outing for the faint of heart. 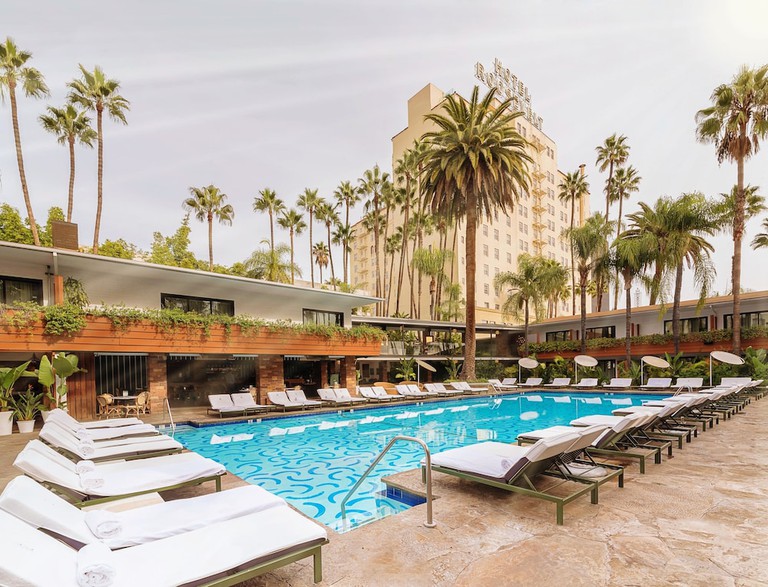 Courtesy of The Hollywood Roosevelt / Expedia
View Rooms
Allegedly the most haunted spot in Los Angeles, the Hollywood Roosevelt juxtaposes lavish, 1920s-inspired decor with horror stories of Marilyn Monroe’s specter lurking in the hallways. Ghostly trumpet music has also been heard, supposedly from the spirit of Montgomery Clift, who practiced in suite 928. Still, it’s not all ghastly. The Writer’s Room bar is a historical yet elegant place to unwind: there’s a vintage wine cart, velvet furniture and a decades-old typewriter. If you’re craving a bite, head to 25 Degrees, dubbed a ‘glam twist on the traditional American burger joint.’
More info 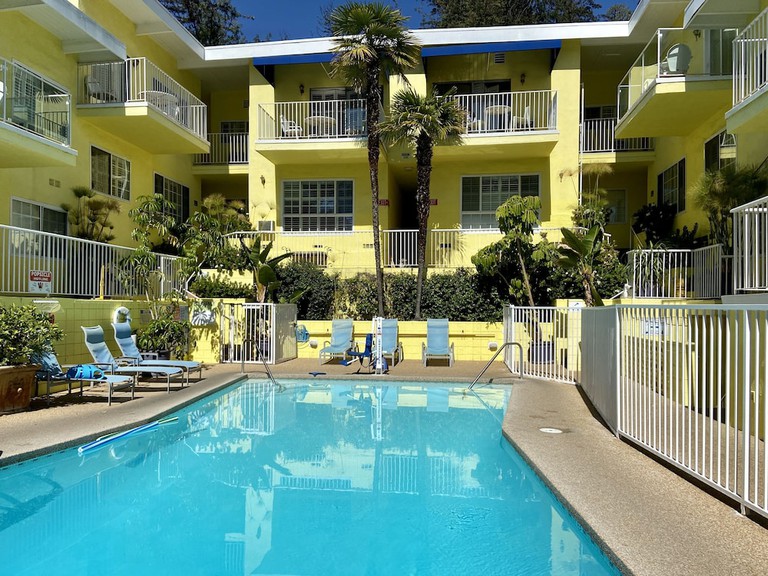 Courtesy of Magic Castle Hotel/ Expedia
View Rooms
This hotel is just one block away from Hollywood Boulevard, making it an ideal base not only if you want to stop by the Museum of Death, but also the Hollywood Walk of Fame, Chinese Theater and Hollywood & Highland shopping center. The suites here come with either one or two bedrooms, and can accommodate up to six people; each of which gets a full kitchen and dining area. Complimentary snacks are available 24-hours, while there’s also a complimentary breakfast. You even get access to the Magic Castle: a highly exclusive, magic-themed club that dubs itself ‘the most unusual private club in the world.’
More info 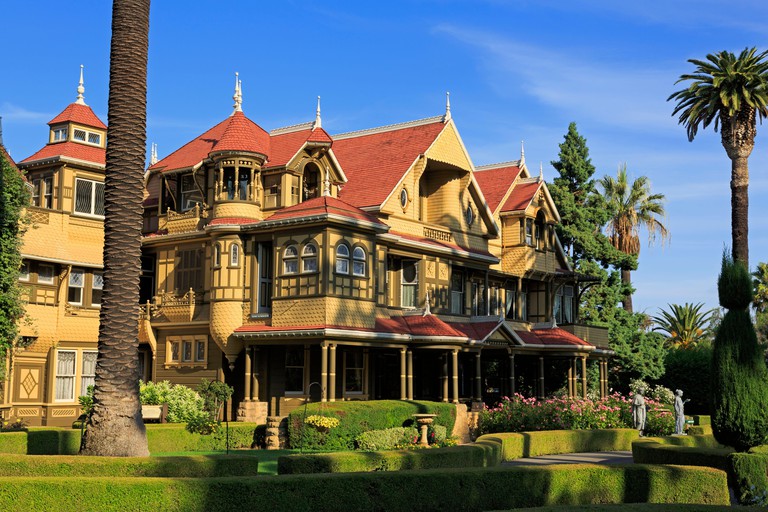 © Richard Cummins / Alamy
William Wirt Winchester was the treasurer of the Winchester Repeating Arms Company, who manufactured the notorious Winchester rifle. Three years after his 1881 death, his widow – Sarah Winchester – began adding room after room to this San Jose mansion, not stopping until she herself passed away in 1922. Folklore says she built nonstop to appease the spirits of those killed by Winchester rifles, with many a ghost story emanating from the 24,000sqft (2.2sqkm) property. There’s even a horror film about it. However, if you’re not the superstitious type, the Winchester Mystery House is still a 160-room labyrinth as disorientating as it is eerie. Book a tour – and try not to get lost forever. 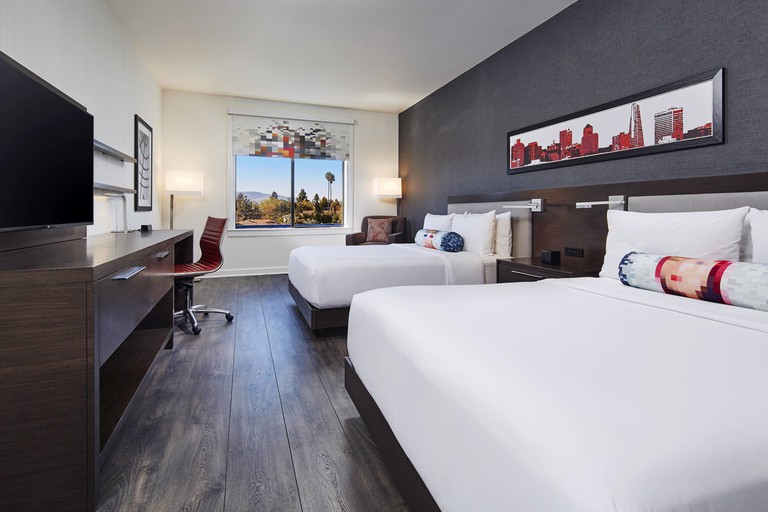 Courtesy of Aloft San Jose Cupertino / Expedia
View Rooms
This hotel is only a five-minute drive from the Winchester Mystery House, yet it feels like a different world. Wellness is a top priority at this Marriott-chain stay; rooms come with Bliss Spa amenities and there’s a 24-hour gym. Coffee, breakfast and snacks can be had at the Re:Fuel station, prepping you for a day where you’ll be spoiled for choice of activities thanks to a great location. Not only does the mansion loom nearby; you’re just a short drive from local wineries and the Great America amusement park.
More info 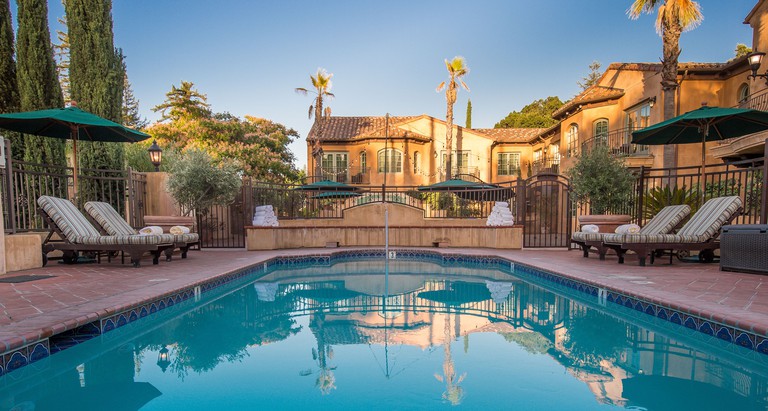 Courtesy of Hotel Los Gatos / Expedia
View Rooms
This four-star hotel resides on the southern outskirts of San Jose, meaning you’re well-located for central attractions like the Winchester Mystery House (it’s just a 14-minute drive away) as well as more rural idylls. These include the Sierra Azul Preserve – great for hiking and views – and the historical community of Chemeketa Park. After a long day exploring, relax in this classy spot, designed to be reminiscent of a Mediterranean villa. Pop by the rejuvenating spa for a massage, then make a reservation at Dio Deka, the Hellenic restaurant found on-site.
More info 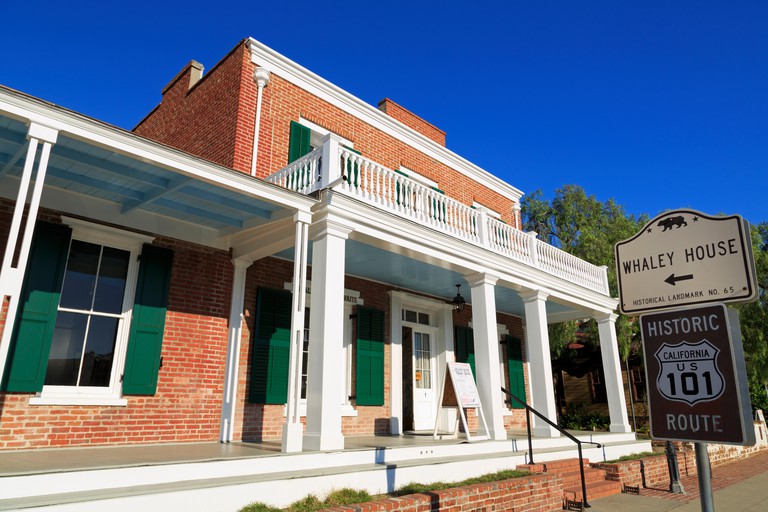 © Richard Cummins / Alamy
The most haunted house in San Diego, this land has seemingly been cursed ever since thief Yankee Jim Robinson was hanged here in 1852. Nonetheless, settler Thomas Whaley began building on the spot just three years later. He’d later die within the walls, as would wife Anna and four of the couple’s children. Since opening to the public, stories of 19th-century ghost sightings and visitors hearing unexplained footsteps have been common. 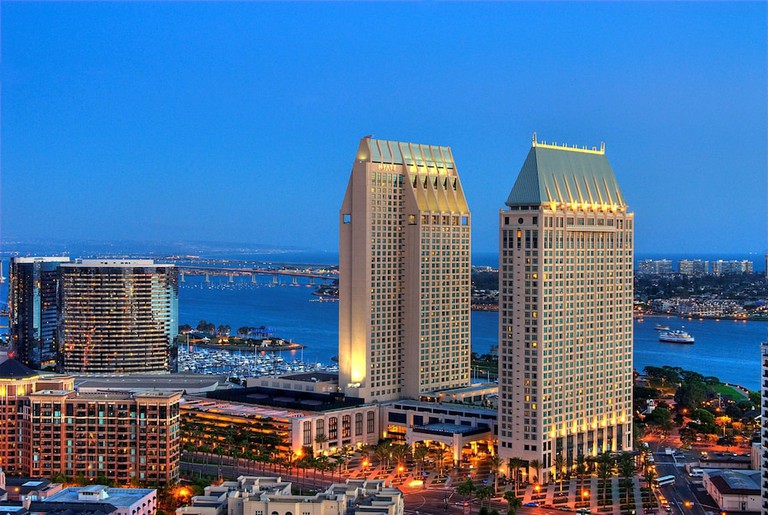 Courtesy of Manchester Grand Hyatt San Diego / Expedia
View Rooms
If you want everything great about San Diego summarised in one hotel, then you’d best stay at the Manchester Grand Hyatt. It’s a towering skyscraper situated in the marina beside San Diego Bay, meaning the 1,628 rooms overlook cityscapes and blue waters alike. Every suite has the most modern of upholstery and you’ll be bathed in natural light thanks to the floor-to-ceiling windows. Close by isn’t just the Whaley House (a nine-minute drive), but also the sandy beaches of Coronado Island and the chic Little Italy neighborhood.
More info 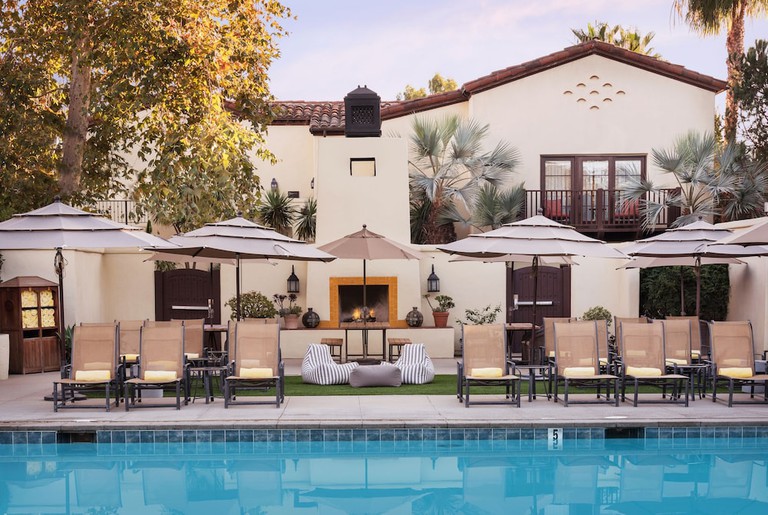 Courtesy of Estancia La Jolla Hotel & Spa / Expedia | Courtesy of Estancia La Jolla Hotel & Spa / Expedia
View Rooms
After close encounters with ghosts and ghouls have got you worked up into a ball of nerves, there’s no better way to unwind than with a stay at a spa hotel. This quaint, 10-acre (4ha) resort offers full-body massages and facial treatments, after which you can doze off in spacious, rancho-inspired rooms. The hotel sits between the calm seaside villages of La Jolla and Del Mar and is just a stone’s throw from the Torrey Pines Golf Course, so practically everything is designed to give you some zero-stress relaxation.
More info 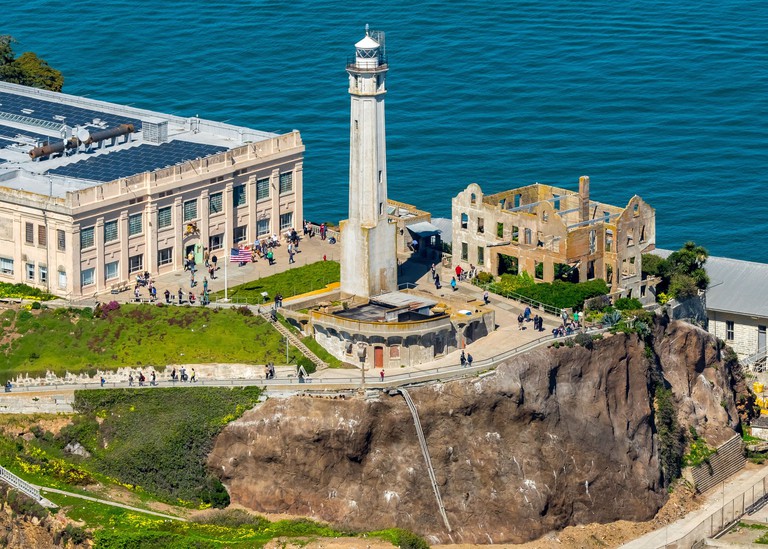 © imageBROKER / Alamy
Easily the most famous defunct jail in the world, Alcatraz Island sits isolated 1.3mi (2km) from the US mainland – the perfect place to ensure would-be escapees could never make it to San Francisco. It was such an ideal spot that nobody is known to have survived breaking out over the course of the prison’s 29-year history. Although Alcatraz as a Federal Penitentiary closed in 1963, you can tour the abandoned building to this day. Get a taste of the harrowing isolation of D Block’s solitary confinement and see the cells of such famed inmates as Al Capone, Robert Stroud (AKA the Birdman of Alcatraz) and Frank Morris. 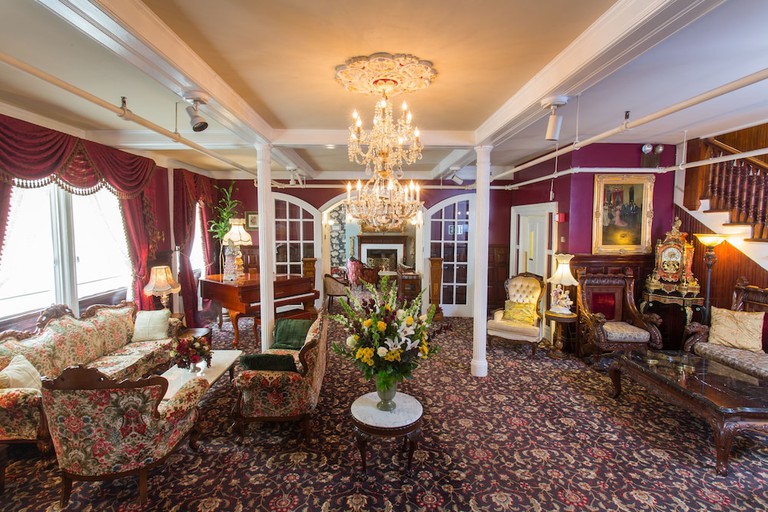 Courtesy of Queen Anne Hotel / Expedia
View Rooms
As perfect for dark tourists as Alcatraz itself is this mansion-turned-hotel. It first opened as a girls’ boarding school in the late 19th century and is so allegedly haunted that it once appeared on the television series Haunted Hotels. The most famous of the spooky residents is one-time headmistress Mary Lake, whose spirit may still reside in room 410: her former office. If you’re not the ghost-hunting type, you’ll still be drawn in by the vibrant exterior – a throwback to the Victorian era – and ultra-traditional rooms.
More info 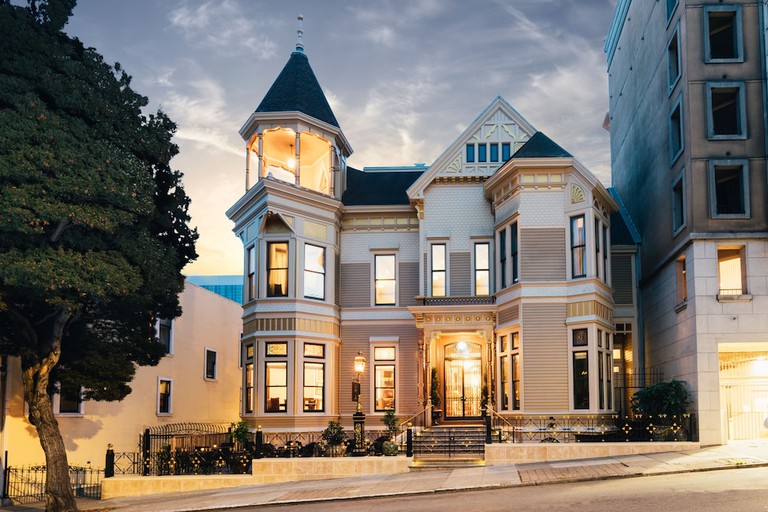 Courtesy of Mansion on Sutter / Expedia
View Rooms
Tours of Alcatraz depart from the legendary Pier 33, from which this luxury hotel is only a 12-minute drive away – or a 50-minute walk, if you want to soak up some sun and seaside vistas along the way. You’ll feel like anything but a jailbird in this pristine, Victorian-inspired boutique, which contrasts high-society art with hyper-modern gym facilities. Stay in the aptly named Gold Room for a true taste of luxury.
More info
Give us feedback