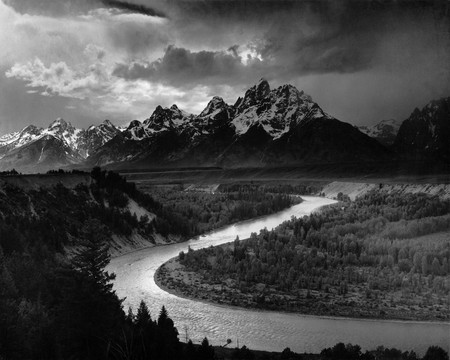 Ansel Adams is one of the most celebrated American photographers of all time, known for his dedication to wilderness preservation. Through his characteristic black-and-white photographs of the American wilderness – especially the Yosemite National Park – he encouraged an appreciation for natural beauty and highlighted the importance of wildlife conservation. Adams was not only a nature photographer however, but also a constant experimenter with his medium. Read on to discover the fascinating Ansel Adams biography.

Adams was born in San Francisco in 1902. He first gained his appreciation of nature during his childhood, where he spent days playing in the sand dunes beyond the Golden Gate. He first visited Yosemite in 1916 and became obsessed by the valley’s beauty. Three years later at the age of 17, Adams first came into contact with the Sierra Club – America’s largest and most influential environmental protection organization.

As Adams matured, his interest in photography and wildlife increased, and in 1928 he was appointed the official photographer of the Sierra club. It was Adams’ involvement with the club that was an integral to his early success as a photographer: his first photographs and writings were published in the Sierra Club Bulletin and he had his first solo exhibition in 1928 at the club’s San Francisco headquarters.

It was during the 1930s that Adams rose to prominence fuelled by his incredible technical ability as a photographer and his relentless activity. In 1933 he made his first trip to New York where he met the photographer Alfred Stieglitz whose work and philosophy remained an inspiration for the rest of his career. The pair had a rich and frequent correspondence, and although Adams was foremost a man of the West, he visited New York regularly in the 1930s and 40s. Adams had considerable success in New York. In 1933, he had his first New York show at the Delphic Gallery and in 1936 Stieglitz gave Adams a solo show at An American Place. 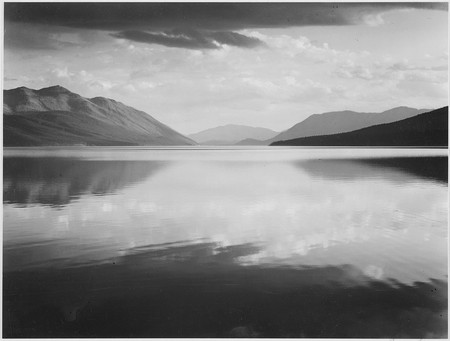 Adams produced ten volumes of technical manuals on photography, which remain influential books today. Indeed, when it came to photography, Adams was a technical master. Other photographers as well as companies such as Polaroid and Hasselbad frequently asked Adams for his technical advice.

Adams was also the co-founder of Group f/64 for which he invented the Zone System: a technique of translating light into specific densities onto negatives and paper, giving photographers better control over their finished photographs. Adams is also known for promoting the idea of ‘visualization’, in which the photographer ‘sees’ in their mind’s eye the final photo before it is taken. This helped the photographer to achieve all of their desired aesthetic and mechanical effects.

Close-up of leaves, from directly above, “In Glacier National Park,” Montana | © Ansel Adams

Adams may have been a technical pioneer, but he may also be seen as the last major figure in the romantic tradition of 19th-century American landscape painting and photography. Anselm Adams’ artwork is often seen as depictions of an idealized wilderness that no longer exists, and it is true that his photographs of the American West have become significant records of what National Parks looked like before tourism. Yet Ansel Adams’ photos also portray true wilderness in America, much of which have remained protected, perhaps in part due to his work.

The Legacy of Ansel Adams’ Artwork

Adams used his work to promote the protection of the American West and the goals of the Sierra Club. However, he always insisted that in his photography ‘beauty comes first’. Indeed, Adams was not only an environmentalist but also an artist. He was responsible for elevating photography to an art equivalent to music and painting, showing that it too was able to express great emotion and beauty. In a revealing statement, he once told his students: ‘it is easy to take a photographer, but it is harder to make a masterpiece in photography than in any other medium.’

Adams’ dedication to his art has given him a deserved place on our list of the 10 Best San Francisco Artists.
By The Culture Trip