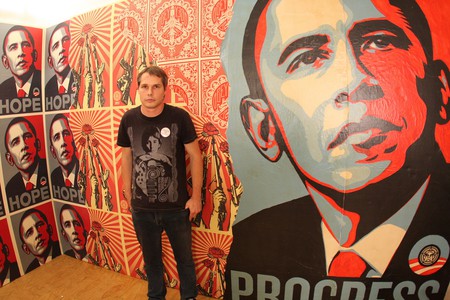 It started with an ominous command: Obey. The white text on red background paired with wrestler André the Giant’s face made its way onto the streets on stickers. The year was 1989, and artist Shepard Fairey’s ambiguous campaign eventually caught on with the public and the press, shaping his career as a street artist, graphic designer, activist, and pop culture icon.

“At first I was only thinking about the response from my clique of art school and skateboard friends,” Fairey told the American Institute of Graphic Arts, describing the iconic André the Giant image. “The fact that a larger segment of the public would not only notice, but investigate, the unexplained appearance of the stickers was something I had not contemplated. When I started to see reactions and consider the sociological forces at work surrounding the use of public space and the insertion of a very eye-catching but ambiguous image, I began to think there was the potential to create a phenomenon.” 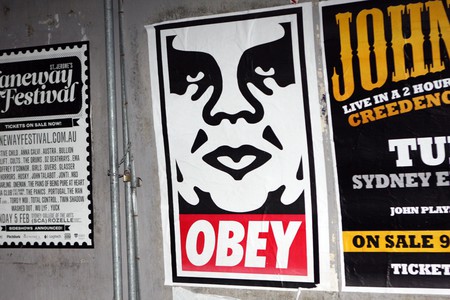 Before creating phenomena, Fairey grew up in Charleston, South Carolina, in a conservative family. He felt powerless as a kid until he discovered skateboarding and punk rock at age 14. Soon, he began putting his designs on skateboards and T-shirts. This early love of art led him to earn a bachelor’s degree from the Rhode Island School of Design, his counterculture reputation sealed by Obey Giant and ‘manufacturing quality dissent.’ Shortly after graduation, Fairey relocated to California, where he now calls Los Angeles his home with his wife and two daughters.

Fairey’s work has taken a variety of forms. “I consider myself a populist artist,” he said in a Chicago Daily interview. “I want to reach people through as many different platforms as possible. Street art is a bureaucracy-free way of reaching people, but T-shirts, stickers, commercial jobs, the internet – there are so many different ways that I use to put my work in front of people.”

This has meant a combination of artistic avenues, from traditional street art – posted without permission – to officially sanctioned street art, from curated gallery shows at prestigious venues such as Pittsburgh’s Warhol Museum or Boston’s Institute of Contemporary Art, to an album cover for Led Zeppelin, magazine covers for Time and Rolling Stone, a bottle design for a Hennessy/Kendrick Lamar beer, and commercial campaigns for retailers, among many other outlets. 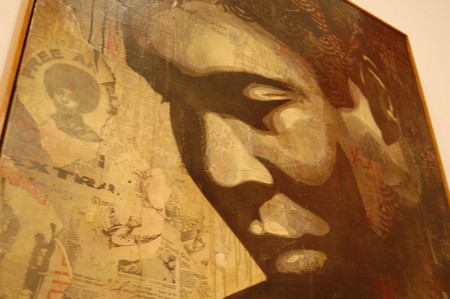 On why he has chosen to undertake advertising campaigns for retailers such as Saks Fifth Avenue, which seems to fly directly in the face of his activism ideals, Fairey understands capitalism can’t be overthrown, only subverted. This is accomplished by using the funds from his commercial art to create his anti-establishment works and still earn a living.

“In order to be the most powerful political artist or artist in general you have to be able to make a living from making your art so you can dedicate all your time to it,” Fairey told Ron English in an interview.

Fairey has earned a reputation for conveying political messages through figures such as Vladimir Lenin, Richard Nixon, Ralph Nader, and George W. Bush. But perhaps most iconic has been his Obama Hope artwork, created for Barack Obama’s 2008 presidential campaign. Inspired to put something positive into the political world, Fairey designed the now-classic Obama portrait emblazoned with the word hope across the bottom in conjunction with approval from Obama’s campaign.

“I wanted the poster to be recognizable as my work, and to be appealing to a younger, apathetic audience, yet tame enough not to be seen as radical or offensive to the more mainstream political participants,” Fairey told The Washington Post. “You want to create the most flattering shapes. Strong in the face of adversity. How the light falls beautifully. It’s idealized.” More than 80,000 of the posters and 150,000 postcard-size stickers made their way into voters’ hands.

It’s not always smooth sailing for Fairey. He has been arrested multiple times for his street art, including in Boston and a high-profile attempt by Detroit to extradite Fairey for multiple counts of vandalism. He also faced a fair use lawsuit concerning the Obama image used in his Hope campaign, with the AP asserting Fairey owed them for use of the photograph from which his design is derived. The case was settled in 2011.

Despite these setbacks, Fairey continues to leave his mark on countries and cities around the world, including South Africa, Philadelphia, Detroit, Dallas, and his home base of Los Angeles. Many of Fairey’s signature murals can be found around Los Angeles. A recent project will see Fairey designing a mural for Robert F. Kennedy Community Schools in Koreatown. Others include a peace tree on The Line Hotel in Koreatown, an elephant at the West Hollywood library, and a mural of punk rocker Darby Crash in Echo Park. 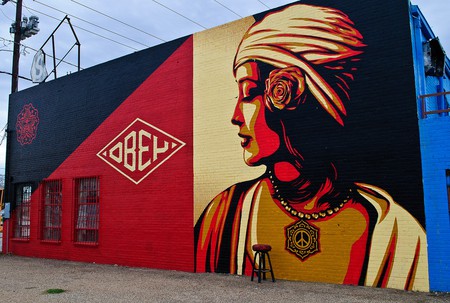 But no matter the project, Fairey always has his roots in the political, subverting propaganda and advertisements, and he hopes others will follow in his creative footsteps. “Many people feel powerless, and my goal is to show that one person can have an effect on things even with limited resources,’ Fairey told the American Institute of Graphic Arts. ‘Whether this manifests itself with people in the form of street art or a magazine or a band, I’m hoping to encourage D.I.Y ethics.”