San Francisco Clam Chowder: A History From Coast To Coast 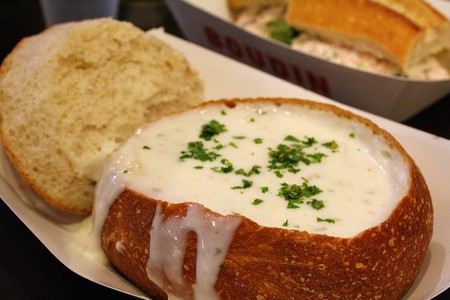 One of the foggy city’s most renowned dishes, clam chowder continues to be a staple in San Francisco. Let us take you on a trip back through the history of this famous dish and learn about how it started and how modern chefs prepare it today.

The story of San Francisco’s clam chowder (or New England clam chowder depending on where you are from), originated between the 16th and 17th century off the coast of Europe. Despite its name, the first instances of clam chowder were recorded in small fishing villages along the west coast of France. Several hundred years ago, chowder was a blanket term that referred to any type of stew or soup that was primarily cooked by fishing families and sailors at sea. Fisherman favored this dish for its simplicity, and used whatever sort of seafood and ingredients they happened to have on hand. This included a wide array of different recipes, some of which included fish and eel. Remarkably, clams were not used in any original recipes, as they were usually fed to hogs. Chowder was also viewed as a poor man’s dish as it spread across Europe and eventually made its way to England. This perception, however, did little to diminish chowder’s popularity. 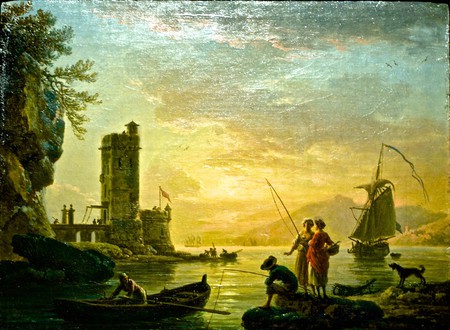 The first instances of American clam chowder came along with the first English settlers who began living on the east cost of the United States. At this time, they were still using eel as a primary ingredient, paired with large quantities of potatoes and celery. In fact, it was the native Americans who were the first to introduce clams to the recipe, as clams were a staple of their diet. Reluctant at first, the European settlers eventually accepted the new ingredient and gave fishermen a new use for their mollusk pig-fodder. With the expansion of the eastern colonies across the entire country, the traditions of this humble dish moved further west. 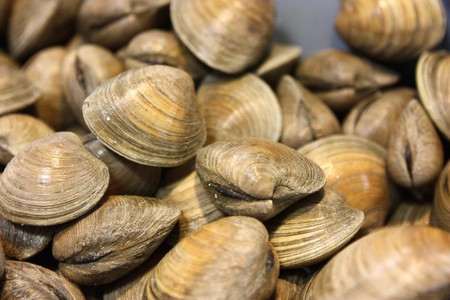 Eventually, settlers made their way to the west coast, and to what would become San Francisco Bay. By that time, there were already a number of different clam chowder varieties, with some of the most popular being the Manhattan, Boston, and the New England clam chowder. Many of the original recipes are still handed down as family recipes and are served all over the city, primarily in the Fisherman’s Wharf neighborhood. San Francisco is the city that started the trend for clam chowder to be served in a sourdough bread bowl. These two seaside dishes are essentially synonymous with one another but there also many new modern takes on this old favorite. Vegetarian and vegan diets are quite prominent in the Bay Area and some of the chowder flavors reflect this. For those less health-conscious, there are a number of delectable recipes that utilize bacon and pork. Many of these flavors and more are served at the San Francisco Soup Company, known for its alternative dishes and wide selection of different soups from all over. 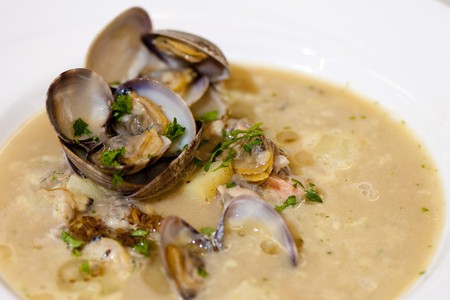 No matter what flavor or what goes inside, all chowder leads back to its eastern roots and continues to find new fans as more and more people make the trip to the United States. For San Franciscans, the classic creamy white New England chowder will always hold a special place in our bread bowls—and in our hearts.