Though his name is not known to many, Paul Revere Williams stands out as one of the most prolific architects in the history of Los Angeles. Not only did Williams design many of Hollywood’s most elegant private residences, but his hand (or more accurately, his sketchpad) can be seen in such iconic southern California landmarks as the Beverly Hills Hotel and the Founder’s Church of Religious Science. Williams’ achievements are even more remarkable when considering that he had to struggle against institutional racism throughout his life. 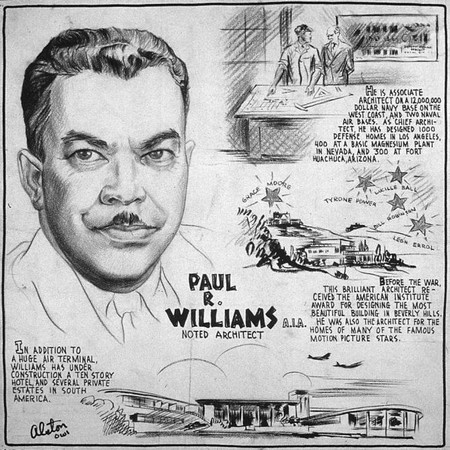 Poster from Office of War Information on Paul Revere Williams, 1943 I | © Charles Alston/Wikicommons

Paul Revere Williams was born in Los Angeles in 1894 to recent immigrants from Tennessee. Having lost both of his parents by the age of four, Williams was raised in the foster care of a family friend. It was Williams’ foster mother who first recognized and encouraged William’s passion for drawing and design. By the time he was a teenager, Williams had already committed to a career as an architect, despite the response of a high school guidance counselor, who scoffed that a ‘negro’ had no hope to succeed as an architect, stating, ‘your own people can’t afford you and white clients won’t hire you.’

And yet, as if to prove such pessimists wrong, Williams managed to land a position in the firm of architect Wilbur Cook only a year after graduating from high school. By the time Williams was 30, he had not only had become the first African-American member of the American Association of Architects but had won several prestigious competitions for his designs and had been appointed to serve on the Los Angeles Planning Commission. Practicing as an architect in an age when racial equality seemed like a fanciful, if not radical, idea, Williams faced some unique challenges. Williams always held his hand behind his back when visiting construction sites, for instance, in case the client did not feel comfortable shaking a black man’s hand. Nevertheless, in Williams’ words, ‘allowing the fact that I (Williams) am a Negro to checkmate my will to do,’ would ‘form the habit of (my) being defeated.’ Williams went on to design or work on more than 3,000 buildings in his lifetime, most of which were located in the Los Angeles area. 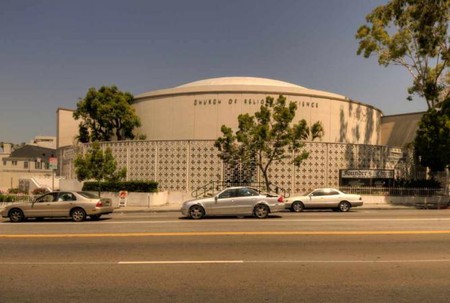 Williams’ extensive repertoire deserves special attention in part because it includes some of the most iconic landmarks in Los Angeles.

One such structure, well-known to all who drive through (or live in) Koreatown, is the Founder’s Church of Religious Science. Built to house the headquarters of a Los Angeles-based Christian sect, the concrete structure’s circular layout, rooftop dome, and intricately-patterned outer walls simultaneously bring to mind a medieval mosque and a modern observatory. Williams’ design (which also incorporates a tree-lined garden into the outermost sphere) reflects on the sect’s philosophy of unity between earthly beings and the holy spirit and conveys a unique, if not exotic, image in a city dominated by boxy modernist structures. 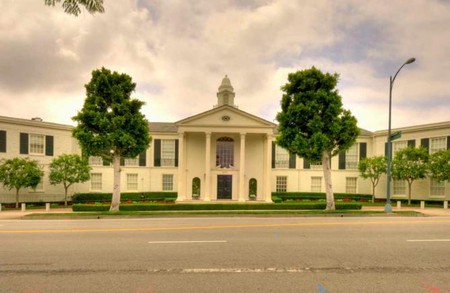 Directly across the street from Beverly Hills City Hall, an enormous Georgian-style palace symbolizes the city’s opulence and splendor. This Old World mega-mansion was not constructed for any prince or baron but rather as the headquarters for the Music Corporation of America, one of the dominant music talent agencies in the country from the 1930s to the 1950s. Williams’ elaborate but refined design for the complex fulfilled the desires of company head Jules Stein to convey a corporate image of old-school sophistication (that would conceal the company’s origins in the speakeasy trade) and to create a quiet and comfortable workspace. After the Music Corporation of America sold the complex to Litton Industries (a defense contractor) the new owner hired Williams to add a second building and parking structure to the complex. Since 2003, the structure has housed offices for the investment firm, Platinum Equity. 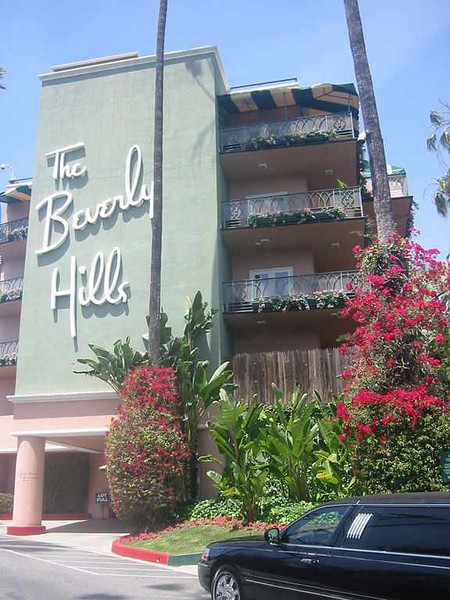 Architect of the Rich and Famous

Other structures designed by Williams are more famous for being destinations for Hollywood’s rich and famous than for their actual architecture, although the latter should not be ignored.

The Beverly Hills Hotel, for instance, is renowned not only as another easily-identifiable landmark in this glitzy city, but as a hideout for celebrities (from John Lennon to Jessica Alba) looking to lay low. Unlike with the previous structures, Williams did not design the entire building (which opened when Williams was only a teenager), but rather directed a remodel in the 1940s, during which he created the hotel’s trademark cursive signature and distinctive pink, white, and green color scheme while overseeing the construction of adjacent bungalows. Despite additional renovations in recent years, Williams’ modifications have been left largely untouched owing to their recognized value. 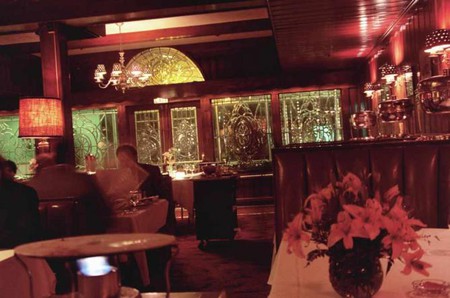 Chasen’s, back in the day I | © Alan Light/Flickr

Williams also did interior renovations for Chasen’s, a restaurant legendary for decades for serving homey comfort foods such as chili and steak to Hollywood’s A-listers. Williams redesigned the restaurant in the 1940s, adding wood paneling, pine walls, and stuffed leather booths to emphasize a sense of both formality and intimacy. The restaurant went out of business in 1997 and today houses a Bristol Farms supermarket, which has retained the restaurant’s original appearance in a small section of the supermarket in homage to the Chasen’s legendary fame and design. 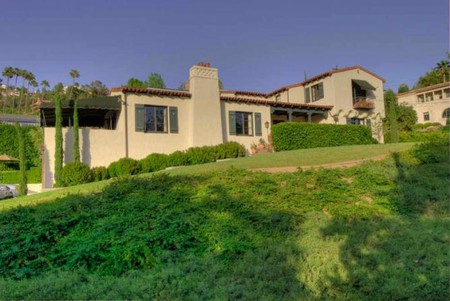 Finally, Williams designed numerous private homes for Los Angeles’ wealthy residents, including figures such as Frank Sinatra and Lucille Ball. The design of Williams’ houses run the gamut from Spanish (Mission) Revival to English Georgian Colonial (as Williams sought to please the unique preferences of clients). However, most are designed in a way that is tasteful and blends in with the natural surroundings. According to an employee at one Beverly Hills real estate brokerage, whenever Williams’ homes go on the market today, they are ‘gobbled up in seconds‘ because of their good taste and elegance. 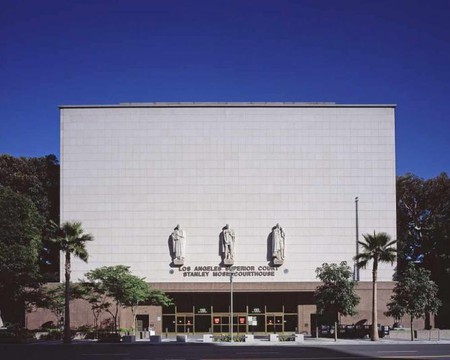 In conjunction with the firms of Austin, Field, and Fry, Stanton and Stockton, and Adrian Wilson, Paul Williams designed the County of Los Angeles’ two most important administrative buildings: the Kenneth Hahn Hall of Administration, which is the seat of government of Los Angeles County, and the county’s Stanley Mosk Courthouse. The buildings’ stocky outward appearance and barren modernist facades prove, apart from the friezes above the courthouse’s entrance, neither memorable nor inspiring, and there has actually been talk in recent years of replacing both buildings with something more inspiring.

Together with the firms of Pereira and Luckman and Walton Beckett, Williams also worked on designing Los Angeles International Airport, better known to many as LAX. The airport is renowned neither for its layout nor for convenience to travelers but has, nevertheless, become Los Angeles’ primary international and domestic gateway. 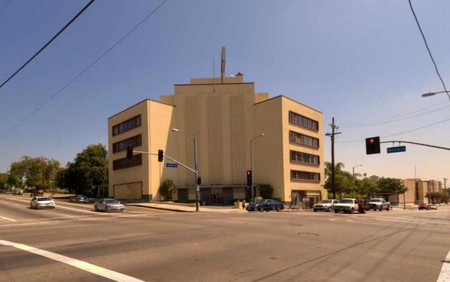 It should be added that although Williams worked for many moneyed and powerful figures, he always kept Los Angeles’ African-American community close to heart. Indeed, Williams conceived some of his most striking facades on behalf of prominent African-American institutions.

One such client was The Golden State Mutual Life Insurance Company, which by the late 1940s had become the largest African-American owned business west of the Mississippi River and a leading provider of life insurance to California’s African-American population at a time when they were frequently turned down by white-owned insurers. Williams’ 1949 design for the company’s headquarters exudes a stoic, mid-century elegance and provides overtones of (then-nascent) architectural brutalism as a slanted center section, demarcated by a trio of giant doric friezes, unites the building’s two geometrical wings. On the interior walls of the lobby, Williams advised the painting of two murals, ultimately commissioned to the artists Hale Woodruff and Charles Alston, which portray four centuries of California’s African-American history. 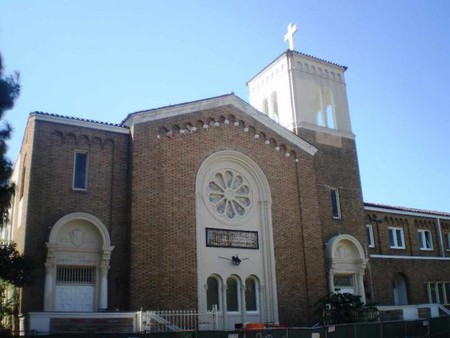 Earlier in his career, Williams worked with the Second Baptist Church, the oldest African-American congregation in the Los Angeles area. Williams’ picturesque 1924 church edifice so skilfully adopts the rose windows and arches of Medieval European Romanesque churches, that it seems to belong more to 12th-century Italy than 20th-century Los Angeles. The church has remained in this building up to the present day, becoming an important center of community activism during the Civil Rights Era. Martin Luther King visited the church so often that he called it his ‘West Side home.’