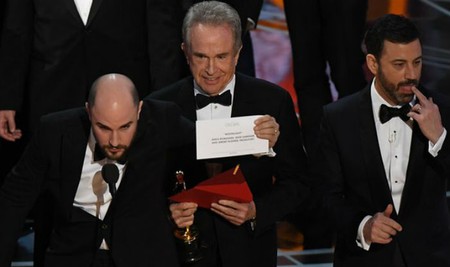 The most embarrassing moment in Academy Awards history occurred last night when the celebrating producers of La La Land had to relinquish the Best Picture prize to the makers of Moonlight.

For months, Damien Chazelle’s La La Land had been the clear favorite to win the Best Picture Oscar. Some pundits had predicted that it could even top the 11 Oscars won by Ben-Hur, Titanic, and The Lord of the Rings: The Return of the King.

Though the moment had long passed when the infectious romantic musical could achieve a comprehensive Oscar sweep, it appeared to have brought its haul to seven statuettes when Faye Dunaway and Warren Beatty announced it had won Best Picture.

The La La Land crew took to the stage to collect the award. Jordan Horowitz led the producers’ acceptance speeches, and another speech was proceeding when figures running behind the mêlée on the Art Deco set at the Dolby Theatre in Hollywood indicated something was amiss. 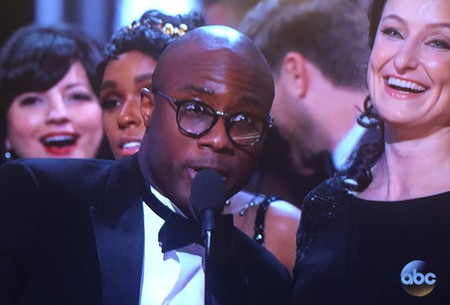 Horowitz then called out to the Moonlight team that Barry Jenkins’ film was the winner. It seemed to be an unctuous gesture from Horowitz—as if he were saying, hey, maybe Moonlight didn’t win but it should’ve. But then he grabbed the envelope from Beatty and showed the card stating Moonlight was the Academy voters’ actual choice. With Oscar host Jimmy Kimmel seemingly in the dark, Horowitz came across as Moonlight‘s forceful sudden champion.

After Horowitz’s intervention, Kimmel jokingly remonstrated with Beatty—“What have you done, Warren?” Beatty explained that he hadn’t been joking. It transpired that he and Dunaway had been handed either the envelope containing the card announcing Emma Stone‘s Best Actress win for La La Land or a duplicate of it.

Beatty had hesitated after opening the envelope, perhaps teasingly whetting the audience’s appetite before the announcement (or pretending to have a senior moment). Dunaway assumed this was the case because she told him, “You’re impossible.” Beatty finally handed her the card and she read, “La La Land.” They might have twigged something was wrong because they’d seen Stone’s name on the card, but they had the pressure of performing live in front of millions worldwide.

There was jubilation among the Moonlight crew, but Jenkins’s speech was hurried and the movie’s moment of glory compromised by what we knew must have been going through the La La Land team’s minds.

Kimmel recovered nicely by suggesting that awards are only awards. This was sage advice given the current political atmosphere and the mood of restraint that had characterized the evening. Not one Oscar announcer or recipient made a fierce political statement on an occasion when many vehement speeches had been anticipated. The nearest Kimmel got to anarchy was tweeting Donald Trump mid-show and adding #Merylsayshi.

The Best Picture chaos was almost welcome—it turned the Oscars into a sporting event, albeit a gentlemanly one. We haven’t heard the last of envelopegate, though.