Margaret Keane Paintings And The Story Of Deceit Behind Them 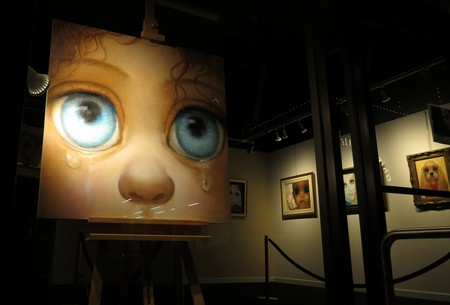 The 2014 release of Tim Burton’s film Big Eyes brought widespread attention to the beguiling Margaret Keane biography. Her paintings of children, women and animals with sentimentally huge eyes known as “big-eyed waifs,” gained considerable commercial success in the 1960s and ’70s. Yet it was only in 1970 that Keane was recognized as the artist behind her paintings. Until then, her husband Walter Keane had been taking credit for the whole collection of Margaret Keane paintings. Such deceit turned to eventual justice for Margaret Keane, and the body of work that she created.

Keane was born in 1927 in Nashville, Tennessee and from an early age, she was absorbed by painting. The large eyes which became characteristic of her mature work, featured frequently even in her childhood artworks. Keane went to art school in Tennessee and later New York.

After having married and divorced her first husband Frank Ulbrich and relocating to San Francisco, Keane met her second husband Walter Keane in 1953. Walter had studied art in Paris, and although he worked in real estate, he still regarded himself as an artist. After the couple married in 1955, Margaret helped her husband shift from real estate to working in the art business, which included selling Margaret’s painting. What Walter did not tell his wife however, was that he was actually taking credit for Margaret’s paintings. Her paintings were simply signed ‘Keane’, making it easy for Walter to claim them as his own.

Margaret wasn’t aware that her husband passing off her paintings as his own until she actually saw him in the act. But Walter managed to persuade her to continue letting him take credit for her work, perhaps because this was during an era when women were urged to support their husbands while remaining in their shadows. As a female artist, Keane believed that she would not sell as well as a man, which may explain why even in the 1960s, when her artwork was making millions, she did not reveal herself as the true artist behind her work.

Margaret was becoming increasingly miserable, however. Walter could be emotionally abusive; he was a drunk and a philanderer who would lock Margaret in her studio with nothing to do but paint. She finally left him in 1965, moving to Hawaii and remarrying.

It was only in a radio interview in 1970 that Margaret eventually revealed that she was the real artist behind her big-eyed paintings. Walter argued that Margaret was lying, which she then took him to court over. At the trial in 1986, they were both asked to produce one of Keane’s characteristic paintings in under an hour. Walter refused, whereas Margaret comfortably finished her drawing. There was little doubt that she had been the real artist behind the Margaret Keane paintings all along and she was awarded $4 million in damages.

Despite the sensational story behind them, Margaret Kean prints, paintings and posters have an enduring appeal, and continue to sell well across America. The popularity of her artworks received a particular boost in 2014, with the release of Tim Burton’s Big Eyes, which dramatized Margaret’s story. Margaret now lives in Napa, California where she continues to paint and since 1992 her work is regularly on display at the Keane Eyes Gallery in San Francisco.

The popularity of Margaret Keane’s work and her fascinating story gives her a deserved place on our list of the 10 Best San Francisco Artists.