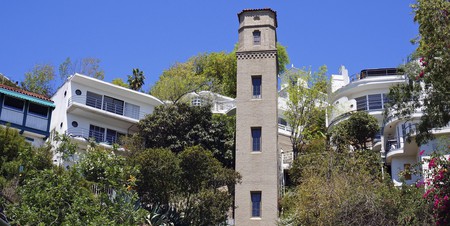 If you find yourself in Hollywood Heights, Los Angeles, seek out the elevator tower leading to detective Philip Marlowe’s lofty apartment.

In Robert Altman’s 1973 fly-on-the-wall film The Long Goodbye (an adaptation of the 1953 noir novel by Raymond Chandler), private detective Philip Marlowe is a man out of step with his time. His knightly values, forged in the 1930s and 1940s, are no longer relevant in a Los Angeles where honor, trustworthiness and integrity are scorned. Altman nicknamed the insolent, laid-back gumshoe ‘Rip Van Marlowe,’ as if the character had been asleep for 20 years.

The place where Marlowe wakes, in the pre-credit sequence, is integral to the story. At 3am, the detective’s hungry cat jumps on him as he lies in a rumpled shirt and suit pants on a bed in his apartment. It is one of four residences on Broadview Terrace in Hollywood Heights (near the Hollywood Bowl) reachable by a five-story, 100-foot campanile-style elevator building known as High Tower at 2178 High Tower Drive.

Chainsmoking and constantly talking to himself, Marlowe shambles forth from his apartment towards the elevator to buy cat food in an all-night store. One of the half dozen (and frequently nude) hippie girls who lives in the adjacent apartment asks him to buy two brownie mixes for her. Marlowe says he will. (“It’s OK with me” is his refrain.) It is evident the girl is going to make hash brownies. The ‘summer of love’ – of which these girls are an out-of-date emblem – the Manson Murders, and Woodstock have left no imprint on Marlowe; he seems to have sleepwalked through the entire era.

The same night, Marlowe drives (Jim Bouton) to Tijuana with his friend Terry Lennox, whose wife Sylvia has been murdered. Marlowe spends three days in the slammer as an accessory. He’s then hired by Eileen (Nina van Pallandt) to find her missing husband Roger Wade (Sterling Hayden), an alcoholic novelist.

Lennox has taken $350,000 belonging to the gangster Marty Augustine (Mark Rydell), who wants the money back. The Wades and the Lennoxes, shallow and self-absorbed nouveaux riches, have become hopelessly entangled. Lennox and Roger Wade are both guilty of violence.

Marlowe’s apartment is his eyrie on the world of these arrivistes, from which he is spiritually and emotionally isolated. It may be shabby, but it’s home, and he loves his cat – which also goes missing.

The apartment’s value as Marlowe’s inner sanctum is violated when Augustine and four of his hoods (one played by Arnold Schwarzenegger) show up. To indicate what he might do to Marlowe if he doesn’t locate the $350,000, Augustine smashes a Coke bottle on the face of Jo Ann (Jo Ann Brody), the gangster’s beautiful girlfriend. Director Altman indicates his sardonic view of justice in mid-1970s America by never making Augustine pay for this heinous crime. Marlowe, however, exacts private revenge for the injustices done to him and others. 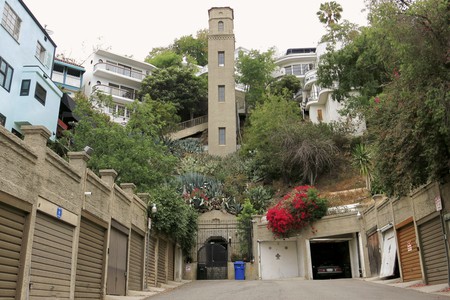 High Tower was built around 1920. The homes on Broadview Terrace – designed in the Streamline Moderne style by Armenian-born architect Carl Kay – were built between 1935 and 1956.

Only the residents have access to the elevator, but the walks and staircases up to the apartments are accessible to the public. It’s worth a little workout to share Philip Marlowe’s unstarry view of Los Angeles.