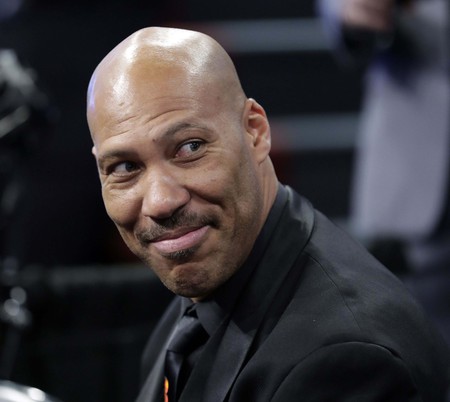 LaVar Ball has taken the sports world by storm over the past year as his eldest son, Lonzo, garnered hype ahead of the 2017 NBA Draft and his subsequent selection by the Los Angeles Lakers, who picked him No. 2 overall.

LaVar, who played college basketball and was on the New York Jets and Carolina Panthers practice squads, hasn’t shied away from the media attention and is becoming a polarizing figure in the industry, whether you love him or hate him. The owner of Big Baller Brand — which sells basketball sneakers for the low-low cost of $495 — rose to fame when he began his endless string of outlandish statements, usually involving himself and/or his sons: Lonzo, a rookie with the Lakers, and UCLA-bound LiAngelo and LaMelo.

We take a look at some of the more extravagant claims made by the outspoken LaVar Ball:

“I’ll tell you right now, he’s (Lonzo) better than Steph Curry, to me.”

“Back in my heyday, I would kill Michael Jordan one-on-one.”

“We’re not competing with Nike and Adidas and Under Armour … we’re above them.”

"We're not competing with Nike and Adidas and Under Armour… we're above them." — @Lavarbigballer on Lonzo's new $495 shoe pic.twitter.com/Aou89gfwXm

“If Charles (Barkley) thought like me, then maybe he’d win a championship.”

“You already know I got me and (La)Melo against LeBron (James) and (Michael) Jordan, anybody. Me and my son against anybody and we’ll win.”

“If Lonzo goes to the Lakers, they’re going to the playoffs.”

"If Lonzo goes to the Lakers, they're going to the playoffs." — @Lavarbigballer pic.twitter.com/LPl7gqK4Lp

“(Rob) Gronkowski can’t hang with me back in my heyday.”