Inside the Box at the Standard, Hollywood 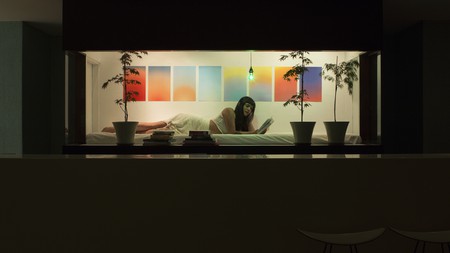 The Box at the Standard hotel, in West Hollywood, has been home to various art projects, including male and female models, over the years | Courtesy of The Standard, Hollywood

Exclusive yet inclusive, creative yet crude, the Box at the Standard, Hollywood is a perfect embodiment of Los Angeles.

It might take a moment or two before you notice the reclining woman in a glass box behind the concierge desk at the Standard hotel in Hollywood. The lobby is decked out in Sixties decor: floor-to-ceiling shaggy carpet, hanging bubble chairs, low plush sofas and a cactus wall. Once you approach the desk, however, you’re all but face to face with the occupant of the hotel’s infamous human fish tank, and it’s nearly impossible not to stare. 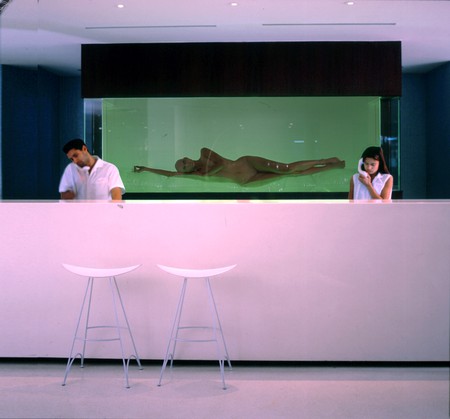 Courtesy of The Standard, Hollywood

Part of the lobby since the Standard hotel opened its doors in West Hollywood in 1999, this versatile glass case has accommodated models, artists, poets and everyone in between. Known as the Box, who or what is contained within depends on when you visit. It could be an artistic homage to Los Angeles, an electronic music duo performing a set or a young woman propped up on her elbows, scrolling through Instagram. There could be nothing in the Box but a mattress and pillow, primed for the next tenant.

In a 2000 episode of Sex and the City, Carrie, Samantha and Miranda check in at the Standard on a trip to LA and encounter the Box. Occupying the space is a muscular man in nothing but his tighty-whities, lounging on an inflatable bed and reading a magazine. “Wait, that’s his job?” Miranda asks, incredulous, “to sit in a fake fish tank in underwear?” 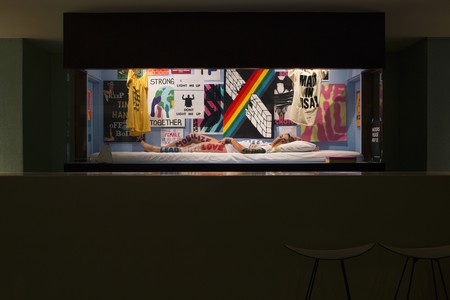 This perception of the Box has stuck: it’s a space that employs Hollywood’s hottest young things looking for some extra cash to sit around and be gawked at by guests. Despite displaying both male and female models, it’s the latter that have become the Box’s most notorious inhabitants. Lilibet Snellings wrote a tell-all memoir of her four years working as one of the Box girls, in which she reveals that she got the job when she responded to the Standard’s search for a new blonde, that her uniform was a white tank top and shorts set and that she was once mistaken for a prostitute.

Andre Balazs, the former owner of the Standard and mastermind behind the Box, seemed to know what he was doing when he conceived the idea. Exhibiting beautiful people in a glass case is such a glaring case of objectification that it has to be satire. Guests, despite performing the role of voyeur, will feel equally on display; any initial bewilderment you might express when you first encounter the Box singles you out as definitely not from around here, and kind of uncool. This is Hollywood – of course there’s a girl in a box. 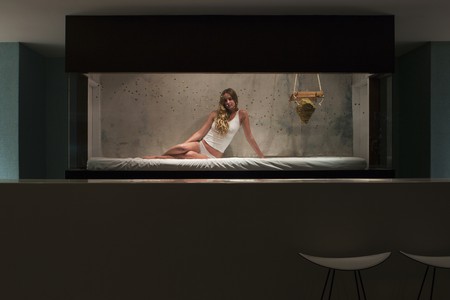 Britt Browne Swarm of Bees | Courtesy of The Standard, Hollywood

In her memoir, Snellings questions whether she was “a piece of ass or a piece of art,” concluding that she was, in fact, both.

The Box is ostensibly an art installation. Artists, environmentalists, photographers, filmmakers, poets and musicians have been commissioned to take over the Box, creating their own unique aesthetic that often extends out to the lobby and outdoor pool deck. Artists will take residency in the Box for a month or two at a time, and are able to direct the uniform and look of Box girls (and boys) however they see fit.

Installations have been as eclectic and inventive as you’d expect from a Hollywood art piece, with concepts ranging from a pop-art apocalypse to a tropical Hawaiian garden. The Box has been used for projects, performances and protests; it’s been decked out with the archival works of photographer Roger Steffens; filled with a swarm of bees by artist and activist Britt Browne and transformed into a collage of lists, notes and bits and bobs in a project by entrepreneur Jihan Zerncirli.

Performance poet Jacqueline Suskin set up camp in the Box for two weeks to work on a book of poetry, giving guests a literal peek into the world of a working writer. Many hotel guests left with their own spontaneously written piece of poetry. In some instances, guests are invited to enter the tank; in the spring of 2019, artist Norberto Rodriguez held one hour Box slots with willing participants, during which he documented and drew the conversation that ensued.

In your face and a little risqué, the Box is a certainly a product of its environment. Like the Standard and the Sunset Strip on which it stands, the Box is quite literally a place to see and be seen, a vacant space waiting to be filled by the ambitious, the novel and the beautiful. For first-time visitors, it’s an apt introduction to LA – it is what you make it.