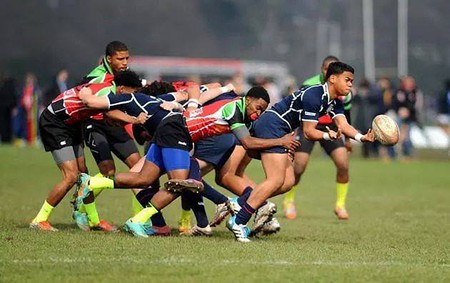 Rugby can trace its origins to the Rugby School in Warwickshire, England, in the 1820s. At the Inner City Education Foundation (ICEF) Public Schools in southern Los Angeles, those roots are found in a nearby parking lot adjacent to View Park Prep High School.

It was on this blacktop flanked by ivy-laden, graffiti walls that Stuart Krohn first presented the sport to ICEF students in 2002. Krohn, a former professional rugby player and captain of the Hong Kong national team, wanted to bring his passion for the game to the inner city not only to teach the game’s intricacies, but also larger values including teamwork, perseverance, selflessness, hard work, success and leadership as ICEF students prepared for enrollment into the top 100 colleges and universities across the nation.

Red, White, Black & Blue Odyssey chronicles the ICEF Rugby program and its players over a three-year period as they embark on journeys from South L.A. to China, New Zealand, England and France. The documentary, directed by James Brown and distributed by XLrator Media, is now available on iTunes and video-on-demand (VOD) services.

“It helps reinforce what the purpose of the program is,” Krohn said. “It isn’t really about the rugby. That’s an excuse for us to get together, and as a group try to meet some difficult goals: making tackles, running hard, supporting each other on the field, supporting each other off the field, and going around the country and world together. It’s incredibly satisfying.”

Flag rugby, like the kind played in the parking lots at these schools where grass and turf fields are scarce, is played at all nine ICEF schools from grades 5-12, reaching upwards of 2,000 students each year. The students are also able to participate in tackle rugby from November to April, when they are transported to local parks and fields for proper playing surfaces. A select group of students are chosen, based on multiple factors including classroom performance, to represent ICEF internationally, and are able to travel to foreign countries to play in tournaments and friendlies, while learning about other cultures.

“Real life lessons start when we leave our home communities and go out into the world,” Krohn said. “We get to see about commonalities and differences. We reflect on our own experiences and what we know. We get a new perspective on ourselves and on society. We grow.” 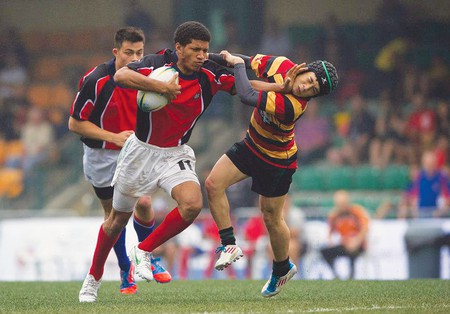 Growth is a major focus of the 101-minute documentary, particularly among the student-athletes. Nia Toliver, for example, addresses her anger issues after lashing out toward a teammate. Leodes Van Buren Jr. is able to step out of the shadow his father unfortunately cast over him in order to succeed on the rugby field and venture off to college.

As the students and players continue their interpersonal growth, the ICEF Rugby program has continued its own rapid expansion. Krohn said the next priority is having their own home field. The program is turning a playground into a quarter-sized turf field with a nearby outdoor workout facility. The ultimate goal is a full-sized field to be utilized by all ICEF sports programs including football, soccer, lacrosse, baseball and softball, not just rugby. Krohn also wants the program to be financially secure so they aren’t constantly raising money for necessities like uniforms and travel. 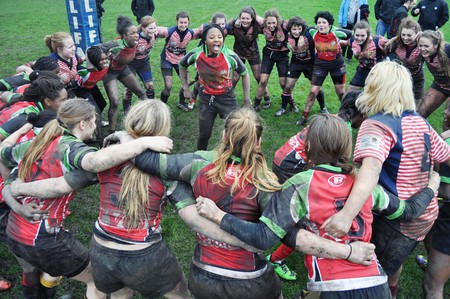 Despite some early problems including lack of interest, building trust with the students and parents, and limited facilities, the ICEF Rugby program is becoming more and more popular.

“ICEF Rugby has gown tremendously over the years,” Krohn said. “Rugby is a known part of ICEF culture. We know that ICEF Rugby fulfills the ICEF mission to prepare our students to get into and through the top colleges in the country. We need to keep it going for a long time.”