How the Salton Riviera Became an Abandoned Wasteland 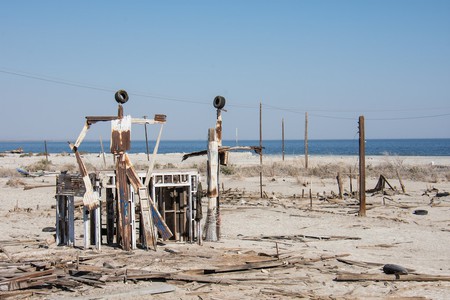 The Salton Sea is one of California’s strangest landmarks. Once a bustling resort town, it’s now a wasteland that looms precariously on the verge of potential catastrophe. It all started with a mistake in 1905.

Back in the early 1900s, the California Development Company carved out an irrigation canal that allowed access to water from the Colorado River to the farmlands of the Imperial Valley. However, when the river breached the canal, it flooded a dry lake bed that would come to be known as the Salton Sea.

The accidental sea’s halcyon days came mid-century, when the area became a popular resort, attracting 1.5 million people annually. They called it the “Salton Riviera,” or the “miracle in the desert.” The surrounding area, known as Bombay Beach, boomed with hotels and yacht clubs. The sea and its shores teemed with wildlife.

As time went on, however, the agricultural runoff, the sea’s increasing salinity, and the fact that the sea had no drainage of its own made it a less-than-desirable vacation destination. By the ’70s, the fish had begun to die; the birds had also become ill, and the tourists began to disappear. Today, visitors will find vacant buildings, fish corpses, and an unpleasant smell. 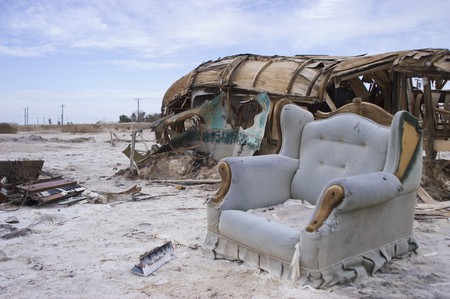 The area, however, is still popular with photographers and urban explorers who come to poke around and photograph the abandoned structures. Bombay Beach also still has a couple of hundred people who call it home. There’s also a wildlife refuge, established in 1930, at the south end of the sea where the public can hike and observe birds and other wildlife. Since 1998, it’s been known as the Sonny Bono Salton Sea National Wildlife Refuge, as Bono, in his capacity as a congressman, had been a champion for the area. It’s also the home of a relatively new art festival known as the Bombay Beach Biennial, which seeks to “transform this derelict yet inspiring place that is frozen in time into a living [and] breathing art movement.” 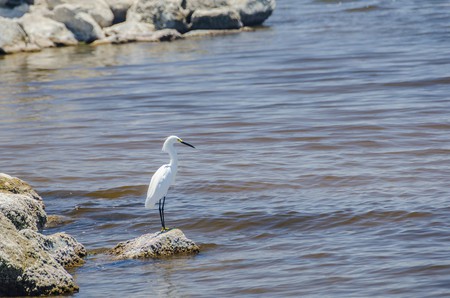 Looming over the Salton Sea is a major concern: if the sea were to dry up entirely, the exposed playa would result in severe dust pollution, which could be detrimental to the health of many. The State of California released a plan in the spring of 2017, detailing their efforts to curb this disaster and return wildlife to this strange terrain.