How San Francisco’s Neighborhoods Got Their Names 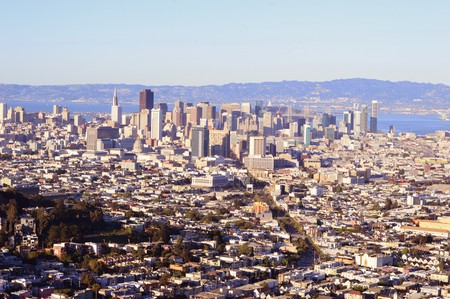 Everyone loves a good origin story. That’s why we eat up the underdog beginnings of our favorite superheroes, read in awe about billionaire authors who started out with one dollar to their name, and applaud ancient ruins that have wondrously withstood the test of time. Every finished product comes from a singular idea, and these names of San Francisco neighborhoods are no exception to the rule.

If you’ve ever seen San Francisco featured on television, you might have been looking at Pacific Heights. The posh area is known for its wealthy residents and stellar views of the city—the neighborhood is elevated 370 feet (113 meters) above S.F., after all. Pacific Heights received its name due to its high elevation and proximity to the Pacific Ocean.

The neighborhood lovingly referred to by ‘Friscans as SoMa is an acronym for South of Market Street (cue the “oohs” and “aahs”). This massive district rolls out between Market and Townsend. There, you can expect to find hotels, apartment buildings, sprawling warehouses, nightlife, and scrappy startups.

Russian Hill is an often overlooked gem in the City by the Bay. Nowadays, hipsters flock to the neighborhood for its amazing views and boutique restaurants, but its origin story is a bit darker. During the 1800s, a small Russian cemetery was discovered at the top of a hill, giving the neighborhood its name. Not much is known about the people buried there, but the Russian government has honored them with a memorial plaque atop Vallejo Street.

Before it was the beautiful seaside neighborhood we’ve come to know and love, the Marina District was once only shallow tide pools, sandy banks, and marshland. The Marina—named for its adjoining harbor—is now home to the Palace of Fine Arts and Exploratorium.

Back in the day, Nob Hill was known to San Franciscans as California Hill; however, that all changed after the Central Pacific Railroad came to town. The railroad famously brought together businessmen and investors known as the “Big Four,” who built mansions on top of Nob Hill and launched the neighborhood into affluence. They were referred to as “nobs,” which is a shortened term for the Hindu word “nabob,” meaning wealthy Europeans.

Although the Haight-Ashbury neighborhood is known for its tie to the ‘60s, questionable brownies, and tie-dyed storefronts, its name stems from humble beginnings. Haight-Ashbury represents two streets that intersect. Haight Street was named for Henry Haight, a banker and pioneer who lived in San Francisco during the time of the gold rush, while Ashbury Street borrows its moniker from Munroe Ashbury, who was a key member of the San Francisco Board of Supervisors. Both men had a hand in creating the neighborhood now known as Haight-Ashbury and were instrumental in the development of nearby Golden Gate Park too.

Iconic images of rainbow flags and shirtless gay men in the city were probably taken in one place—The Castro. San Francisco is one of the most progressive cities in the nation when it comes to celebrating LGBTQ rights, and this neighborhood is at the heart of it all. Home to gay clubs as well as political activism, The Castro was named for one José Castro, who was a Mexican general who fought against the American occupation of California. Although he wasn’t successful in his endeavors during the Mexican-American War, his name lives on as a street in the historic district.

There are several theories as to how the Tenderloin got its name, but the most believable one is that it borrowed it from a neighborhood of the same name in New York City. The East Coast’s Tenderloin was deemed as such because it was referred to as the “soft underbelly” of the city (meaning it was full of crime and violence). While S.F.’s Tenderloin has cleaned up its act in recent years, its past has seen some unsavory behavior. Another theory is that due to the area’s high crime rate, police officers during the early 1900s received higher pay for working in a violent area, which allowed them to buy better cuts of meat—hence, the Tenderloin.