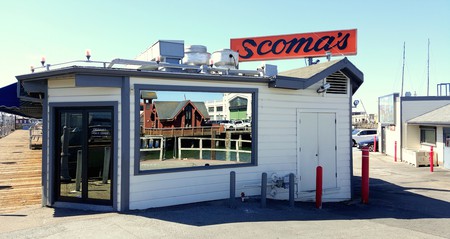 A zoom-lens view away from Pier 39, further up San Francisco’s touristy Fisherman’s Wharf, one of the city’s gorgeous scenic landscape gems lays off the beaten track. Where the Embarcadero map-dodges and loops off the main drag, a vibrant fishing harbor thrives in a surprisingly little visited area. In plain view of the maddening crowds, obscured by an uninviting industrial entrance, the local restaurant’s ‘catch of the day’ arrives on the fishing boats docking here.

On a sunny April afternoon, a stone’s throw from the enchanting Musée Mécanique, fishermen were unloading fat Dungeness crab at Pier 45. Another busy day backstage at the center of Fisherman’s Wharf as weathered sea captains hustle for profits after an unusually late start to this year’s Dungeness season. 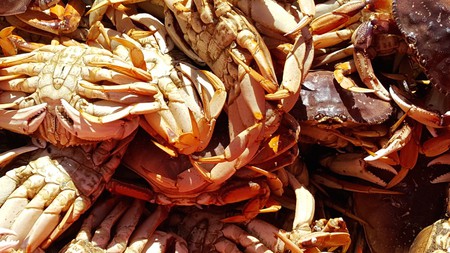 Catch of the day © Brixton Key
As the trim boat’s catch was emptied by bucket loads, a sailor took a cigarette break leaning on the tiny Fishermen’s and Seamen’s Memorial Chapel. Another climbed rigging to fix a broken lamp. A female sea captain barked good humored orders as waves gently lapped on the Georgia pine pillars supporting the wharf. A few patrons walked along the breakwater opposite, a man on a red bike cycled to work. Seagulls pecked at scraps. A heron dived deep into the clear water rising yards away to swallow a fish. 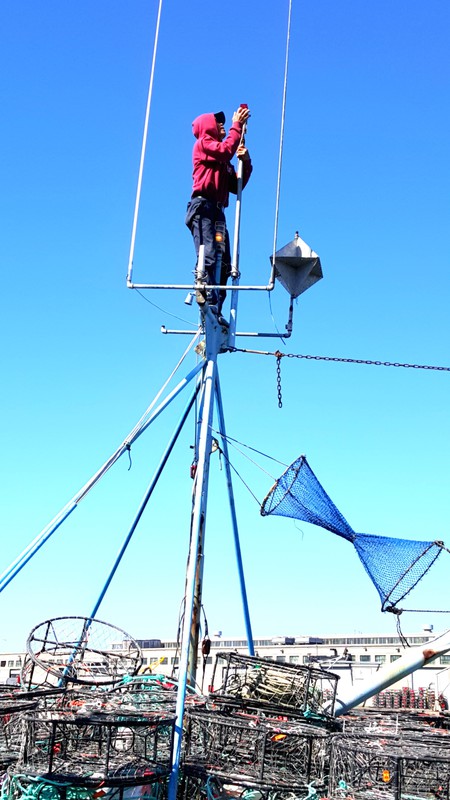 Rigging repair © Brixton Key
In a picturesque city where traditional meanings are disguised by contemporary noise, the real Fisherman’s Wharf is a quiet retreat. A photo-essay on a Samsung Edge screen. A great time-free walk in a city full of varied interesting strolls. You’ll find serenity here at the harbor. It feels like a half century ago as fish wholesalers ply their trade, and sea captains haggle over the price of locally caught haddock. Here the business signs are for Cato Fisheries Inc, and the amusingly named S and M Shellfish, who apparently dominate the shellfish industry. 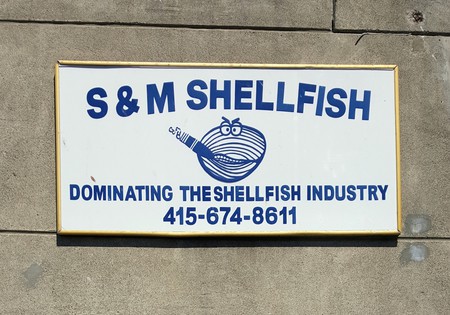 S and M Shellfish © Brixton Key
The workers wear rubber boots, ice piles melt through tar stained planking, and the breeze carries a familiar damp fishmongery smell. A few wiley North Beach locals get to know the captain’s who moor their boats in the picturesque harbor, with a wink and a nod they purchase dinner straight off the dock. 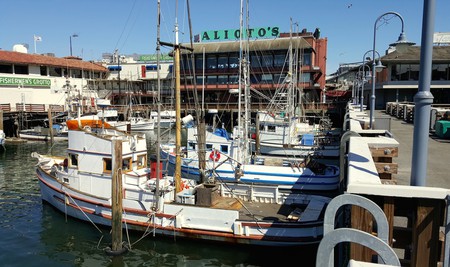 Fishing boats © Brixton Key
The area has been the heart of the fishing trade since San Francisco sprung up with the Gold Rush. The fishing boats were manned by Italian immigrants back then, particularly Sicilians, and the area still feels bound to superstition, so it’s surprising that the Seamen’s Memorial Chapel wasn’t built until 1979. On the first Saturday in October the Blessing of the Fleet is celebrated here. 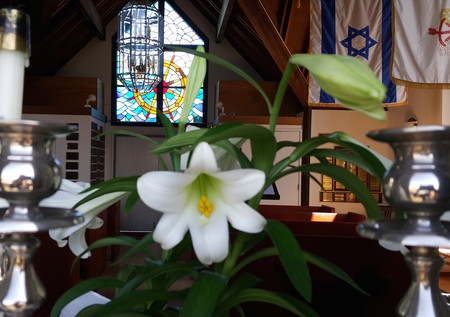 A peek through the chapel window © Brixton Key
A memorial to sailors who’ve lost their lives at sea, brass plaques listing their names can be see beside the altar through inviting windows, if the chapel is not open for a traditional Latin service. Officially named, St. John the Apostle Oratory, the quaint redwood chapel was blessed by the Archbishop of Palermo in 1989. Its campanile stands were removed from the chapel, and the bell inside was rescued from a junkyard. Battered crab pots await mending nearby. 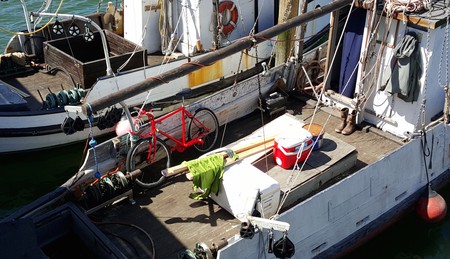 Little red bike © Brixton Key
Behind the street kitchens serving paper boats of crab, and the restaurants that clutter around Fisherman’s Grotto and Alioto’s, are where you’ll find the docked fishing boats. They’ve been mooring here for a long time. Their catches once went to the canneries that lined the wharf. The factories are now tourist arcades. The railroad tracks replaced with a light rail to ferry tourists into the wharf on Muni’s F line with antique street cars. The catch is delivered by small trucks to the Bay Area’s restaurants and supermarkets. 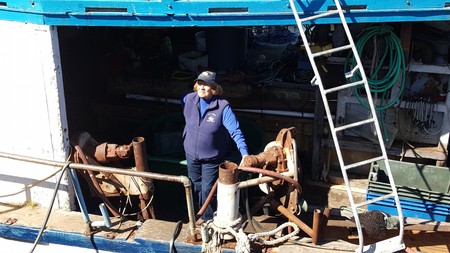 Sea captain © Brixton Key
The fishing boats that put to sea are a motley bunch. Patched, mended, battered, bobbing on the tide, they’re at rest after a night at sea or are being prepped to bring in tomorrow’s catch. There’s an easy rhythm on the wharf that’s light on the pedometer, but adds steps galore as the place is a visual treat. 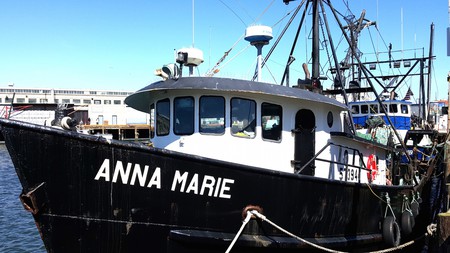 The Anna Marie © Brixton Key
Across from the mirrored windows of Scoma’s Restaurant, the Anna Marie is moored at ease, while crabbers behind her are active and lively. There’s a sea captain getting her boat ready, gabbing safety orders to a hand on the quay. Although the improvised ladder behind her looks a little ‘iffy’, she smiles at tourists in Ohio State t-shirts snapping her image on their cell phones.

Union graffiti on a weatherbeaten freezer door captures the gritty vibe. Junk where the wharf ends melts back to its elements, huge nets, perhaps for sardines await another season. 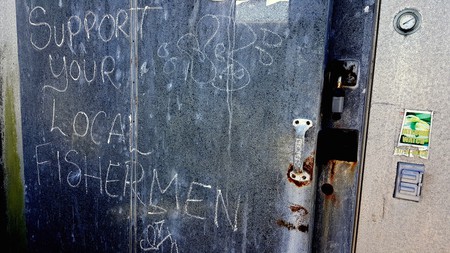 Support your local fishermen © Brixton Key
The day winds down, and while the Spring weather holds good the crabbers will put out to sea until the season ends, and then change their pots for nets to trawl fish shoals and bottom feeders as Summer arrives. The cyclical beauty of nature alive and thriving in a sea of tourist attractions. Pier 45 is an improbable catch for holidayers and locals alike.