Ask San Franciscan chef Melissa King about her pop up restaurant, Co + Lab, and she immediately starts to talk about her friends. There’s Top Chef winner, Mei Lin, whom she met when she was a contestant on the show, her hunter Brittany Davis, who shares her dedication to whole animal cookery, and Douglas Dowers, the ceramicist who creates the dinnerware for the event. We learn more about this innovative chef and her team of experts. 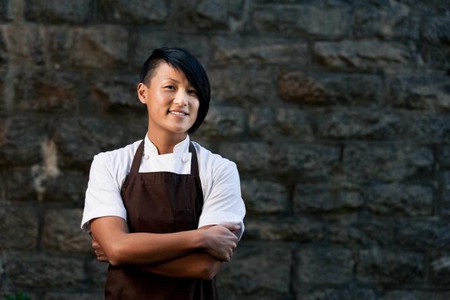 MK: I look back and see how much courage I gained since I got on Top Chef. It made me really come out of my shell. Challenges like public speaking, never knowing what you’d be asked to do next, the cameras on you 24 hours a day – it was totally different from my every day life. For me, as a chef, I was in the kitchen behind closed doors all the time! On Top Chef, the focus was on me, and it was always asking – who is Melissa King? That became a very eye opening experience for me.

MK: Absolutely! Whether or not you win the show, the experience is brilliant. Being in front of a panel of executives and having the opportunity to pitch your story through your food makes you really put your heart out there – it really changed me. 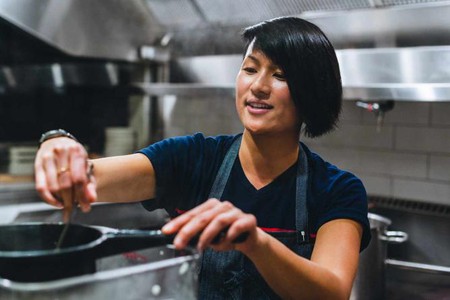 MK: It’s so much pressure; I think I had a knot in my stomach every single day of filming. I would say Top Chef was one of the most challenging things I’ve ever done, and I’ve worked in a lot of restaurants! It’s really a whole other level of stress, I don’t think people understand that until they’re on a show.

MK: Oh wow, that’s a big story! I think growing up in a very traditional Chinese family, there are always certain expectations of you, and they were far different than what I wanted for myself. I’d always struggled with that, and wanting to be a chef was difficult for my father to take in – it took a lot of convincing! Deep down, I wanted to prove something like – ‘hey Dad, look at me, I made it on Top Chef!’ Once the show went public, and he found out I was chosen from thousands of applicants, he was blown away.He couldn’t believe I had the courage to put myself on national television, and he was very proud. It’s what I’d wanted to hear all those years. 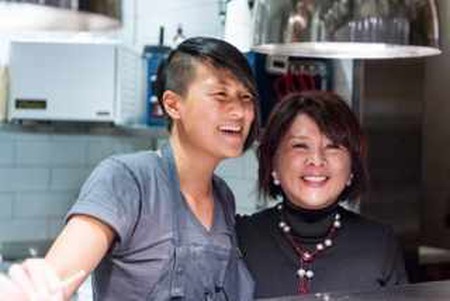 MK: Definitely the one [episode] with my mother in it. We had no idea what was going on that day. I walked onto the set thinking we were going to have a quick fire challenge, and all of a sudden I saw my Mom walk in the door. I totally broke down – we’d already gone through so much in the competition. I had to train her, cook with her – and we won the challenge. I would say that was my peak moment. She got to experience my life for one day, and I felt very proud.

MK: I found myself at the bottom in the middle of the season, and that moment was awakening. You stand in front of a panel of very aggressive judges that know what they’re talking about, and they see every detail of what went wrong with your dish, and they tally all the positive, and the negative and you have to be able to take in that feedback. For me, I felt low in those moments. But I also thought – you know what, I’m going to take your feedback, and I’m going to apply it to the next challenge and stay positive, and learn to grow from it. 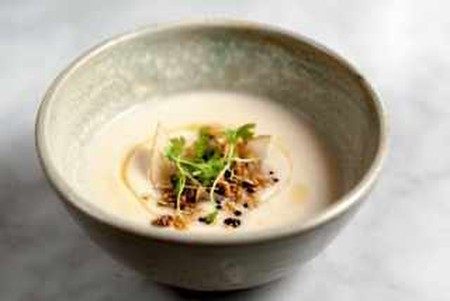 MK: My advice is to keep working hard. Don’t let anything they say discourage you. If your goal is to be the best chef in the world, do it. It’s really about how much you believe in yourself. I know it’s hard in this industry; it’s a male dominant world. I remember starting off 10 – 15 years ago; I was the only girl in the kitchen. It was really hard to let myself shine. But I think now it’s become more open to females in the kitchen, and men in the pastry world. I even worked in a restaurant where the whole line was females. It’s empowering to see that change develop through the years. I think it’s easier now, in this day and age to want to pursue being a chef. So I would say keep your head up and stay positive. 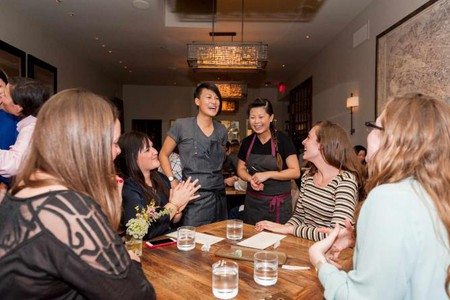 MK: Rustic refined California cuisine is what I’d call it. It’s also hyper local – I even do my own foraging. I like to showcase the technique, but I also like to bring comfort into it. Dishes that require the sort of techniques that maybe your grandmother used – like porridge, soup or hand made dumplings are the things I feature, and I try to elevate those dishes to another level. With the training I’ve had in fine-dining I would say the majority of my cooking is French, but I do like to bridge in Asian flavor profiles, as well as a little Italian. You can see that my style is influenced from everywhere I’ve trained.

MK: The name Co + Lab is a play on the word collaboration. It’s my experiment to see if we could put on a great dinner that’s not just about the food – it’s about the experience.I just looked among my group of friends and joined forces with their talents.

MK: Right after I got back from Top Chef, I started looking for a location for the pop up.I’d secured Mei to get a flight into town, and the process evolved from a dinner party into looking at bringing in some local artisans into the experience. So I found two very talented ceramicists (from the company Douglas Dowers), and they offered to make custom bowls and plates for the dinner. For the menu, specifically – I work with my vendors. For instance, Bellwether Farms wanted to get involved. We decided to make some hand rolled pasta that had their ricotta inside of it, and I designed the custom bowl with my ceramicists for it. Because of the small bowl, I thought – this is going to be great with a broth, so it all just tied together. It’s about communication with my partners and playing off of their strength. 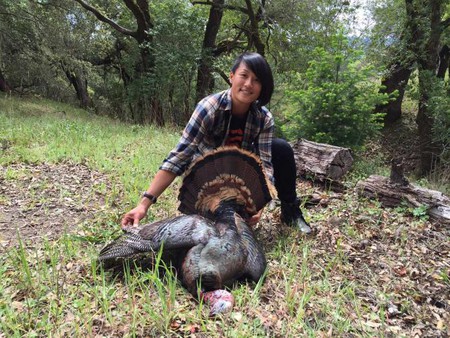 Melissa King on the hunt | Photo by Brittany Davis

MK: Yes – that’s the point of Co+Lab – to provide a unique and intimate dining experience. It bridges the beer maker (Fort Point Brewing Company), to the wine maker (Bluxome Street Winery), to the ceramicists (Douglas Dowers) that create custom ceramics for my dinners. The dishes we make bring many people together in this way.For instance, for a dessert, I partnered with Philz coffee, and we recreated the mint mojitoin dessert form. We made a chocolate coffee ganache, and the chocolate was from Dandelion chocolate in Mission. I thought – how could I elevate this even more? So I took a sheep yogurt from Bellwether Farm, and made a toasted sheep yogurt ice cream togo on top. We even had the farmer from Moon Fox Farm grow chocolate mint microgreens as a garnish – just for this dessert.

MK: My friend Brittany Davis hunts and started a custom leather company called Brass+Blade. I just tag along with her since I don’t have a hunting license and am a bitchicken to shoot a large animal, and then I butcher and cook whatever she catches. She hunted a 100-pound deer and we turned her dining table into a butcher shop. I tookthe deer neck and shoulder meat and made venison raviolis for my first Co+Lab. We went hunting for turkeys a few weeks ago and smoked the breast meat and madeturkey stock with the bones. I enjoy whole animal cookery and don’t like to wasteanything. So yes, along with having a farmer up in Petaluma, I even have my own hunter! 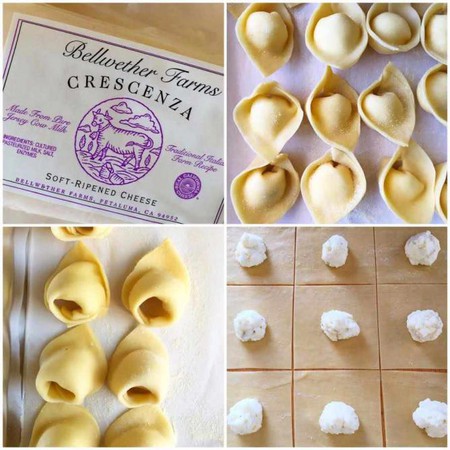 MK: Yes, that’s so much fun. The first time, we went around to the tables to say hello. At the second dinner, Mei was also there. People applauded, and they shouted out questions, sowe opened up the room to questions and comments at the end of the dinner.I love this part, because it gets the people who are normally behind the scenes moreinvolved. They all came to my last dinner – my farmer from Petaluma came, the winemaker came, and they all enjoyed it, along with the people in the dining room. I was ableto introduce the dinner guest to them, and say: hey – this guy grew your radishes! I wantpeople to be really involved in that way. That’s what San Francisco’s taught me, it’sopened my eyes as a chef. And that’s what Co+Lab is about – you meet everyoneinvolved in creating your meal, in a different way than a restaurant.

MK: Eventbrite has been very supportive, giving chefs a platform to host an event like this.They’ve become my platform for selling tickets.You can also go on my website, where you can seewhat I’m up to and follow me around the city.