A Guide To Dining At Ippuku, Berkeley 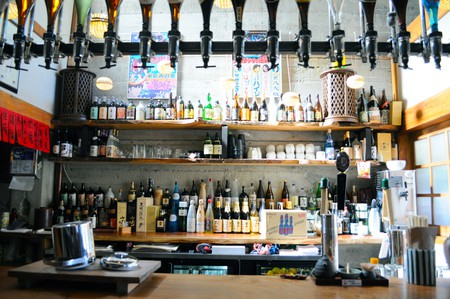 Behind the counter © Sharon Hanh Darlin/Flickr

You’re not a real foodie until you’ve dined at Ippuku. This restaurant offers a Japanese izakaya experience within the Bay Area, with high quality liquor and deliciously unforgettable bites. Located in Berkeley, an epicenter of hipsters, political activists, and academic geniuses, Ippuku fits within the weirdness of Berkeley and will transport diners to faraway lands without leaving California.

Having Japanese style seating brings authenticity and truly adds to the ambiance, but it is slightly adjusted for Western diners. The tables at Ippuku incorporate a pit underneath allowing for a good old ‘chair-and-table’ feel, but the illusion works. Wear nice, clean socks, because the seiza booths are a strict ‘no shoe’ zone. Ippuku also offers smaller booths against the walls for parties of two, sitting side by side and facing the walkway with a bamboo mat hanging from the ceiling.

Japanese whiskey has became popular within the past few years, and Ippuku has an impressive selection as a part of their extremely well stocked bar. They claim to have the ‘largest selection of shochu outside of Japan’ alongside their sake and beer. Impress your friends and coworkers with your new found knowledge of Japanese whiskey and cocktails, or try their grapefruit or Meyer lemon sake cocktails, where the drinker chooses the juice-to-sake ratio.

Behind the counter | © Sharon Hanh Darlin/Flickr

In Japanese culture, consuming raw meat is perfectly fine (they are the ones who invented sushi, after all), and what this comes down to is the quality of the meat and how the chickens are raised. Ippuku sources their poultry from organic, free range, ethical farms, but the disclaimer of ‘consume poultry at your own risk’ still does apply. It sounds unnerving, but the consumption of raw chicken meat is not as scary as the food safety police claims it to be. This is why Ippuku is a unique place to earn this particular ‘brave foodie’ badge.

The preparation of the raw chicken can come in one of two ways:

Think sashimi at any other sushi joint, but instead of fish, you’re eating chicken. The chefs at Ippuku quickly sear the outside of the chicken meat, and then thinly slice it. The sashimi style holds up to its sushi brethren and is simply buttery, refreshing and tasty against the salty citrus ponzu sauce.

Chicken Tartare: minced, chicken breast, served raw, in a spicy marinade with a raw golden egg yolk on top and nori chips on the side

If the sashimi style scares you, the tartare is a great way to take baby steps. Instead of being thinly sliced, tartare is minced pieces of a raw chicken breast marinated in a spicy sauce. The egg yolk adds a buttery texture, complementing the spiciness of the dish, and the nori is a wonderfully salty vessel to help you scoop up every last bite.