An Introduction To Guns N' Roses In 10 Songs 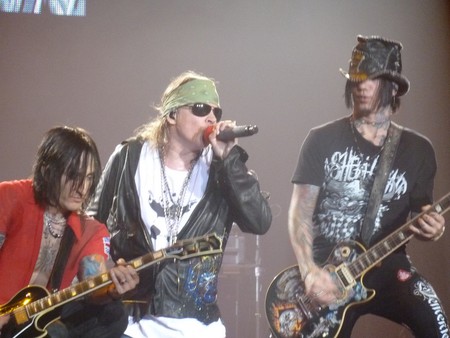 Guns N’ Roses are one of the most successful rock groups of all time, with hit singles that were not just influential during the peak of their fame, but remain classics that regular people still sing along to two decades later. They were primarily considered as part of the hard rock genre that was popular during the seventies and eighties, and formed in Los Angeles in 1985. Each of their members was a star in his own right and they’re still well-known today, from Axl Rose as the lead singer, to Slash as their famed guitarist, bassist Duff McKagan, drummer Steven Adler, and rhythm guitarist Izzy Stradlin. They are essentially considered rock gods, and were inducted to the Rock n Roll Hall of Fame immediately upon eligibility in 2012. Here are some of their most famous songs.

Actually regarded by Slash himself as his favorite Guns N’ Roses song, this song was first released on 1987’s Appetite for Destruction. The Chorus for the song was written in a rental van while the band drank and played acoustic guitars on their way back from a San Francisco show. Its heavy main riff and mind blowing guitar solo make it one of Rock n’ Rolls greatest singles.

A song describing the typical day of band members Slash and Izzy, Mr Brownstone references to their heroin use and describes building a tolerence to the drug with the lyrics ‘I used to do a little, but a little wouldn’t do, so the little got more and more. I just keep trying to get a little better, said a little better than before.’ According to Slash, the song was written on a grocery bag before being shown to Axel Rose.

The rumor goes that the famous guitar riff which opens this unmistakable melody came about when the band was messing around playing circus tunes. The lyrics were penned by Rose as a love song to his girlfriend, Erin Everly.

This one was written early on, when members of the band were in their first band, Hollywood Rose. (Fun fact: The bands Hollywood Rose and LA Guns joined together and emerged as ‘Guns N’ Roses). The song was released on Appetite for Destruction and was G&Rs first single, describing a time when the band, although broke at the time, could pretty much get anything they wanted due to their newfound fame.

This is actually a cover of a famous song written by Paul McCartney that was also performed by Bob Dylan. However, Guns N’ Roses’ version far surpassed either of the other songs in popularity, and it was their tough cover that made the song as well known as it is now.

6. Welcome To The Jungle

Although written in Seattle and inspired by an encounter they had in New York, this song is actually about Los Angeles. It refers to the concrete jungle, and the roaring pace and screeching vocals are fitting for such a topic.

This is another one of Guns N’ Roses more melodic songs that did surprisingly well with non-metal music fans. Axl’s typically screechy high-pitched voice is complemented by harmonizing in the chorus.

8. You Could Be Mine

Originally released as the theme song for 1991’s Terminator 2: Judgment Day starring Arnold Schwarzenegger, the deal for You Could Be Mine was negotiated over dinner at Schwarzenegger’s house. The song was written by Izzy in regards to his failed relationship with his girlfiend.

One of the band’s few protest songs, stating that all wars are civil wars – with one of the lines stating war ‘feeds the rich while it buries the poor’ – ‘Civil War’ was inspired by band member Duff McKagan’s mother’s activism. He elaborated to Rockline, ‘I went in a peace march, when I was a little kid, with my mom. I was like four years old. For Martin Luther King.’

This song was originally supposed to be on their first album, ‘Appetite for Destruction,’ but they they worried about putting more than one ballad on a single album that was meant to be primarily hard rock (the other was Sweet Child O’ Mine). It was probably a good move, as both the slower songs turned out to be two of their most successful hits.