A Literary Itinerary of California 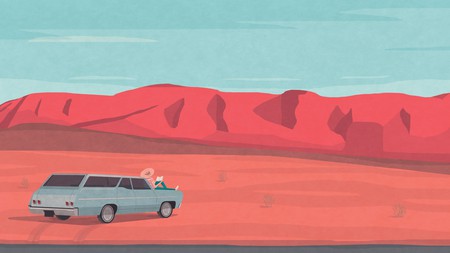 March is National Reading Month, so put down your phone, pick up your favorite read, and get ready for a bookish adventure. To truly celebrate the event in style, we’ve designed the ultimate road trip for bookworms with a literary tour of California. We’ve got stops for Kerouac disciples, Steinbeck stans, Twain groupies and Chandler devotees. So, it’s time to hop in the car, blast your audiobook through your speakers and zip along the California coastline with Jack London and Robert Louis Stevenson regaling you with tales along the way.

The start of the perfect literary trail through California takes us to Gold Country. Mark Twain became a household name when he wrote the short story The Celebrated Jumping Frogs of Calaveras County in 1865, which was inspired by his time in Angels Camp in Calaveras County. The story is about a gambler who attempts to train a frog for a frog-jumping competition, only to get swindled out of his money. To get into the same frog-jumping spirit (without the grift), visit Calaveras in May for the annual Calaveras County Fair and Frog Jumping Jubilee where professionals from around the world bring their well-trained frogs to compete for frog-jumping supremacy. If you can’t make it in May, start your literary road trip in October and come for the Mark Twain Wild West Fest where you’ll find everything from strolling singers and Mark Twain lookalikes to Wild West games and a petting zoo. 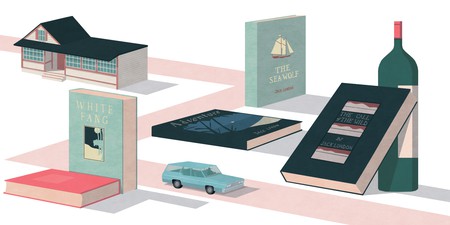 Once you’ve had your Mark Twain fill, hop on the road to California wine country where you’ll discover the Jack London State Historic Park. Named after the author of Call of the Wild, White Fang, The Sea-Wolf and many others, the state park celebrates London’s love of nature and is home to his gravesite, the Jack London Cottage and The Beauty Ranch, where London pioneered modern farming techniques.

Once your London time is up, head over to the Robert Louis Stevenson Museum in Napa Valley where you can learn about the author of Treasure Island’s exploits. Better yet, you can actually trace the footsteps Stevenson wrote about in The Silverado Squatters and visit the locales he describes in the book that include the Petrified Forest, Old Faithful Geyser, and the Old Lawley Toll Road. Once you’re done with your author-intake, make a small jaunt to the Beringer Vineyards for a wine tasting at the oldest operating winery in the entire state – a former haunt of the Stevenson clan.

It’s time to get On the Road and head south into San Francisco where Beat writer Jack Kerouac spent copious amounts of time scribing, drinking and flirting throughout the city’s hilly streets. Kerouac acolytes should hop over to Jack Kerouac Alley, which was named after the author who spent hours, or perhaps days, at the adjacent Vesuvio Cafe and City Lights bookstore next door. Today the alley has brightly colored murals and engraved writings from Kerouac, John Steinbeck and Maya Angelou. To learn more about Kerouac and the Beat Generation, stroll across the street to the Beat Museum, which chronicles the collection of writers and artists who congregated in San Francisco in the 1950s. One last stop for the book-loving traveler is the American Bookbinders Museum, which gives guests an interactive lesson on the history of bookbinding. 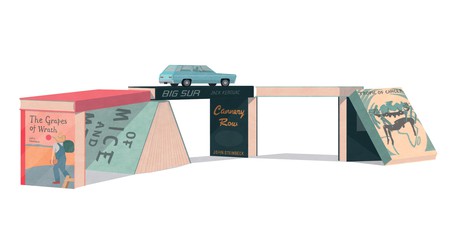 One of the most scenic drives in the world is the trip from San Francisco to Monterey along the stunning cliffs of the Pacific Coast Highway. With endless views of the ocean, you’ll drive into literary history at the place where venerated author John Steinbeck wrote his most famous novels including The Grapes of Wrath, Cannery Row, East of Eden and Of Mice and Men. You can follow Steinbeck’s footsteps through the old canneries of Monterey (now shops, restaurants and the famous Monterey Bay Aquarium), the National Steinbeck Center and the Steinbeck House in Salinas. Literary explorers could also venture on a side-trip through the town of Soledad, which was the setting for Of Mice and Men.

As you continue driving south, make a point of stopping in Big Sur for its rocky, untouched coastline, which served as the inspiration for the Jack Kerouac novel with the same name. Henry Miller fans will want to visit the Henry Miller Memorial Library, which pays homage to the author of Tropic of Cancer, The Colossus of Maroussi, and Big Sur and the Oranges of Hieronymus Beach, which chronicles Miller’s time in the seaside town.

After cruising along the coast of California on Highway 1, it’s time for a final literary stop in the sprawling city of Los Angeles. Fans of The Big Sleep and The Long Goodbye should head into Hollywood where they’ll find Raymond Chandler Square, which honors the late great author. While you’re in Hollywood, make dinner plans at the classic steakhouse Musso & Frank, which was once the stomping ground of erudite elites like F Scott Fitzgerald, Ernest Hemingway and William Faulkner. Another Hollywood literary landmark is the Joan Didion House where Didion chronicled her time in the city in her book of essays The White Album. And yet another Hollywood hang belongs to Charles Bukowski and his historically preserved bungalow. Once home to more drinking than any human being should’ve been able to sustain, it is now available to rent and the ideal place to rest your head after a long drive south. Finally, make your way to UCLA’s Powell Library for some inspiration at the spot where Ray Bradbury wrote his prescient novel Fahrenheit 451.