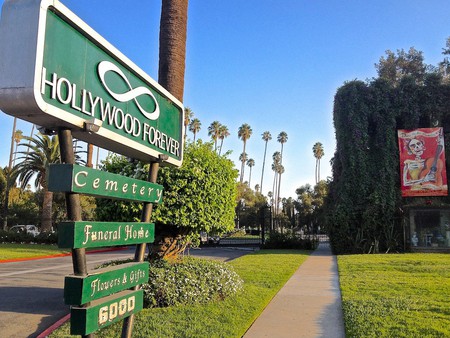 Hollywood’s only cemetery is also one of Los Angeles’ most beloved venues.

Summer nights usher in a sea of movie-goers who spread blankets on the grass as the tombstones cast long shadows. They pass around plates of cheese and charcuterie and pour wine into plastic cups while the dead rest in peace around them. Other nights host concerts, sometimes outdoors or in the property’s Masonic Lodge, and every autumn sees a massive Dia de los Muertos celebration. Hollywood Forever Cemetery is occasionally so lively that one might forget it’s best known as the final resting place of the stars.

Hollywood Forever was founded back in 1899, located on Santa Monica Boulevard between Gower and Van Ness. At the time, it was called Hollywood Memorial Park Cemetery. It consisted of 100 acres until 40 of those were sold to Paramount Pictures, where the studio remains to this day. (Notably, no one is buried on Paramount land, but that doesn’t stop them from offering an “after dark” ghost tour.) 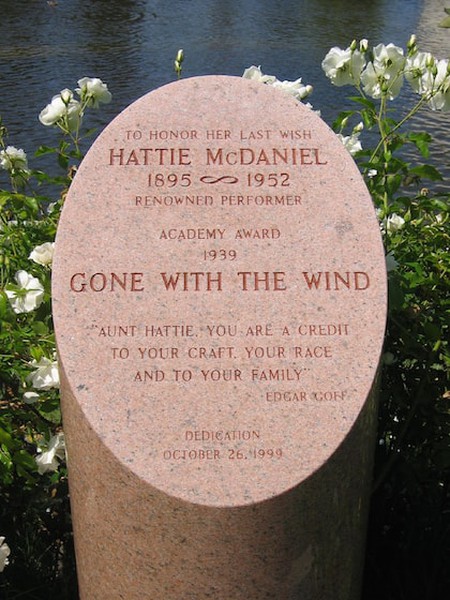 In 1939, Jules Roth purchased the cemetery. An ex-con of the white-collar crime variety, Roth made no real attempt to care for the cemetery or prevent others from vandalizing it, so it gradually fell into a state of disrepair. Additionally, Roth was so adamant about keeping the increasingly dilapidated cemetery segregated that he refused to allow Hattie McDaniel, the first black actor to win an Academy Award, to be buried there. She was ultimately buried at the Angelus-Rosedale Cemetery instead.

Yet that tide turned after Roth’s death when brothers Tyler and Brent Cassity purchased the cemetery. They gave it both a makeover and its more glamorous name and built a monument in honor of McDaniel.

At the time, Jay Boileau, Hollywood Forever’s VP of research and development, told LA Weekly, “I think there’ll still be a draw to the cemetery for that more meaningful experience, particularly if you have a family that’s interred there. You’re going to come in, look at the permanent marker, leave some flowers—but then I think it’s natural that you’re going to want to go to the [Forever] theater and relax and remember. The whole idea of Forever is really about celebrating a person’s life rather than celebrating their death.”

Guests who wander the cemetery today will likely stumble across several famous graves to celebrate. Actor Rudolph Valentino, who died at only 31 of periontitis, has his crypt here. For years, a woman known as the Lady in Black would leave a single red rose at the site. Identified as Ditra Flame, she claimed that Valentino had visited her in the hospital when she was a teen. Other women in black garb soon followed suit, leaving behind their own flowers.

Director Cecil B. DeMille, mobster Bugsy Siegel, and Maila “Vampira” Nurmi are buried here too. Judy Garland was originally buried in New York, but her children had her remains moved to L.A. in 2017. Musician DeeDee Ramone’s grave is here, as is a magnificent cenotaph for his bandmate, Johnny Ramone. Johnny Ramone was cremated and therefore is not buried beneath the statue, but his guitar-playing monument is forever a place to pay your respects to punk. Mel Blanc, the voice actor behind several recognizable Looney Tunes characters, is buried under the epitaph he uttered as Porky Pig: “That’s all, folks.” 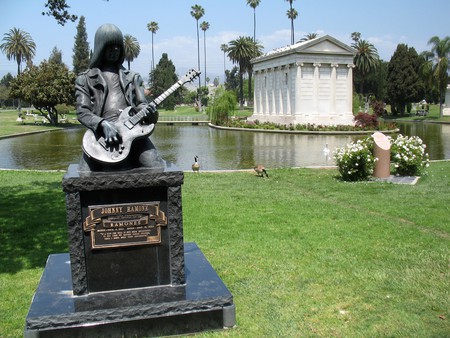 Explorers may also find a memorial to the 20 victims of the Los Angeles Times bombing, committed in 1910 by trade unionist brothers who wanted to send a message to anti-Union Times editor Harrison Gray Otis. The brothers mistakenly assumed no one would be in the building in the wee hours of the morning, but a miscalculation set the bomb off three hours too soon and on top of natural gas lines that they had no idea were there. The tragedy once called the “crime of the century” may be over 100 years in the past, but its victims are forever memorialized here.

On top of the history lessons, Hollywood Forever is probably one of the only cemeteries people peg as an excellent date-night spot. Cinespia is one of L.A.’s most popular film series, screening classic, cult, and modern cinema. The films are splashed against the white wall of a mausoleum, while some 4,000 guests lounge on the adjacent lawn. (There are no gravesites here.) You might even recognize the event from an episode of American Horror Story: Hotel, in which vampires The Countess (Lady Gaga) and her companion Donovan (Matt Bomer) lure a young couple to their demise at a showing of Nosferatu. Later, it is revealed that the immortal Countess had once known Rudolph Valentino, and she is seen at the cemetery again, visiting his crypt—not unlike the real-life Lady in Black.

Visitors who wish to see this iconic L.A. landmark are free to do so, free of charge. Hollywood Forever Cemetery is open daily from 8:30 a.m. to 5 p.m. Guided walking tours are available on most Saturdays at 10 a.m. The tours last about 2.5 hours and cost $20. Check the website to verify dates or reserve a slot online.