A Brief History of the Hearts in San Francisco 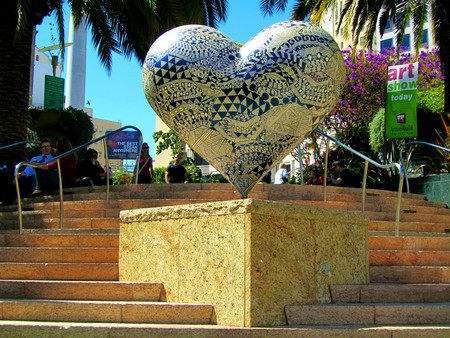 On San Francisco’s street sides, in banks, and perched along the Lyon Street steps, there are 131 Hearts. The large installations, which line the city with color, are now synonymous with San Francisco, making it nearly impossible to go a day without spotting a Heart. Although they stand autonomously, The Hearts of San Francisco serve a much greater unified purpose.

When first appearing in 2004, this project was the brainchild of the San Francisco General Hospital Foundation, raising money with artistic contributions from some of the world’s most notable artists. Today, they continue to grace both visitors and locals with the message of human kindness, giving, and unity.

Inspired by the classic Tony Bennett song “I Left My Heart in San Francisco” and the international exhibit CowParade—a worldwide display of cow sculptures commissioned by different artists—the Hearts are San Francisco’s city-wide artistic contribution. San Francisco General Hospital Foundation envisioned the fundraising platform to showcase local artists who would paint hearts installed in different public spaces. Each year, San Francisco artists are invited to paint their very own Heart to be displayed in the city for that year. At the end of each year, Hearts are auctioned off with proceeds going directly to the hospital foundation. 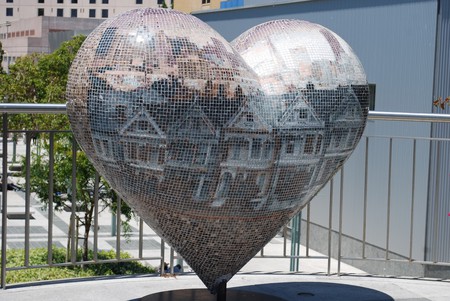 Holding a roster of contributors ranging from artists to musicians, the Hearts themselves include some unique works of art. The above Heart, “Painted Ladies We Love”, done by Alan Roth and Nick Berg, is compiled of photographs to make up the city’s Painted Ladies homes. The Heart pictured below was designed by Lewis Sykes in the 2008 selection titled “San Francisco Cherubim.”

Creations include painted mosaics, compilations of polaroids, abstract works, even portraits of San Francisco’s infamous wild parrots. Many are simple, table-top-sized sculptures like Barbara Libby-Steinmann’s Mini Heart “San Francisco Urban Parrots”, featuring two wild parrots lovingly nestling the other with Koit Tower just behind them. The most notable of Hearts, however, are the batch of five-foot-high 400 pound ones found in San Francisco’s staple locations. 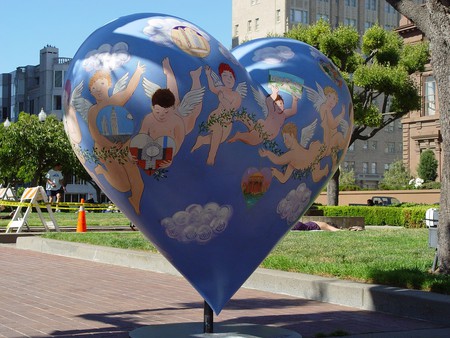 San Francisco’s tradition of lining the city with Hearts is now synonymous with its own history—a project that grossed millions in fundraising also resulted in a city-wide collaboration of local artists and creators. Its success paved the way for the foundation’s Heroes and Hearts, an annual luncheon fundraiser that began in 2006 following the placement of new Hearts, where local heroes are honored for their contributions.

The progress of Heroes and Hearts took the fundraiser from a small tent in Union Square to the field of AT&T Park, selling out with 1,000 people in attendance consecutively. Thanks to the Hearts in San Francisco project, the fundraiser is the San Francisco General Hospital Foundation’s largest source of revenue that has been put towards hospital grants, initiative upgrades, and improving patient care.