A Brief And Bloody History Of SF’s Barbary Coast

The Barbary Coast, 1851 © Library of Congress/Wikipedia

The story of the Barbary Coast, San Francisco’s first red-light district is a fascinating tale permeated by violence, exploitation, and anarchy that can be experienced firsthand by all, through a journey along The Barbary Coast Trail. The district was named for an expanse of North African coastline, from Morocco to modern-day Libya, that was home to dreaded pirates and slave traders who terrorized the coastal villages of Europe. Similar to its namesake, the Barbary Coast of San Francisco was defined by the lawlessness and danger always present within its boundaries. This is the intriguing history of the city by the bay’s first great den of inequity.

Encompassing parts of modern-day Chinatown, Jackson Square, and North Beach, the Barbary Coast was born amidst the chaos and excitement of the 1849 California Gold Rush, when tens of thousands of miners, entrepreneurs, and opportunists poured into the San Francisco Bay Area. Prior to this influx of people, only a small population had called San Francisco home. By 1851, a population of about 200 had swelled to above 10,000, and the local authorities found themselves to be utterly incapable of governing the horde of newcomers. Without the presence of a strong government, various criminals thrived and transformed the Barbary Coast area into the epicenter of their illicit activities.

In the late 1840s, several dozen veterans of the Mexican-American War had made their way to San Francisco and began to call themselves the Hounds. The soldiers-turned-gangsters spent their time intimidating, or ‘regulating’, San Francisco’s non-white residents, specifically Mexican-Americans. It was from this activity that the Hounds became known as the Regulators. At around the same time, another gang was formed by ex-convicts who had arrived from Australia in 1849.

Called the Sydney Ducks, these Australians opened a score of brothels within the Barbary Coast. Having been seduced by prostitutes affiliated with the Sydney Ducks, the unfortunate men who entered these brothels would be mugged and robbed. Needless to say, it would not take long for a dangerous and disturbing escalation to occur. Shortly after arriving in San Francisco, the Sydney Ducks deliberately set fire to parts of the city for the first of six times in two years. The anarchy created by these fires created the ideal conditions for the gangsters to embark upon an unprecedented spree of murder and mayhem. 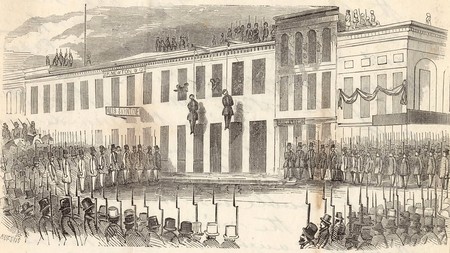 As the gang violence spiraled out of control, over 200 men came together to combat the threat posed by the Sydney Ducks, the Regulators, and other criminal enterprises. Over the next several years, instances of vigilantism increased exponentially, and the Barbary Coast would serve as the frontline in a war between citizen-organized Vigilance Committees and the remaining gangs. Eventually, the size and organizational prowess of the vigilante groups allowed them to drive the criminals from the city. For a time, the Barbary Coast ceased to be the hub of illegal activity and danger in San Francisco.

In the late 19th century, San Francisco underwent a period of unprecedented growth and prosperity, evolving from a chaotic, unplanned town to a city of commercial and cultural significance. This transformation allowed the local government to grow in strength and size. The authorities used their newfound power to thwart any further vigilante uprisings. Unfortunately, the city’s political and economic elite were motivated more by greed and selfishness than a sense of civic responsibility. Without the threat of vigilantism, and emboldened by the disinterest of corrupt politicians, criminal enterprises returned to the Barbary Coast.

Although the Barbary Coast had been the focus of gang activity in previous decades, its reputation as a den of violence and vice was truly forged during a four decade-long era that began in the early 1860s. It was during this time that the district was first referred to as the Barbary Coast by sailors who frequented its saloons and brothels.

The exploitative nature of such establishments was best demonstrated through the widespread prevalence of ‘shanghaiing,’ the unfortunate term for the practice of drugging and kidnapping able-bodied men to serve on ships in need of sailors. ‘Shanghaiing’ was a booming industry in many parts of the world during the latter decades of the 19th century, but it was particularly successful amidst the lawlessness of the Barbary Coast. With San Francisco’s elite choosing to either profit from or ignore the resurgence of criminal activity, all manner of vices flourished, from prostitution to drug use.

From the 1860s to the 1906 Earthquake, the Barbary Coast was home to a diverse array of sordid entertainment. Nonetheless, even the most unique establishments were united with the rest by the fact that they all served alcohol. Crammed together along a three-block stretch of Pacific Avenue, then called Pacific Street, you could find dance halls, concert saloons, seedy dive bars, brothels, and drug stores, where morphine and cocaine were sold to addicts at all hours of the day.

As the profits from these establishments skyrocketed with each passing year, the rule of law all but vanished within the confines of the Barbary Coast. Police officers didn’t dare to patrol the district by themselves, and a night rarely passed without at least one murder. Throughout this era, the disparate entertainment establishments were united by more than an abundant supply of alcohol.

Another common element was the presence of so-called ‘pretty waiter girls’, who were scantily-clad female employees paid to seduce and exploit their male customers. That being said, all of the Barbary Coast’s patrons were men, as women were not allowed to set foot inside the district unless they were employed as a prostitute, pretty waiter girl, or another type of paid entertainer. Despite the obvious dangers involved, the allure of alcohol and female companionship brought many thousands, if not millions, of men back to the Coast year after year. 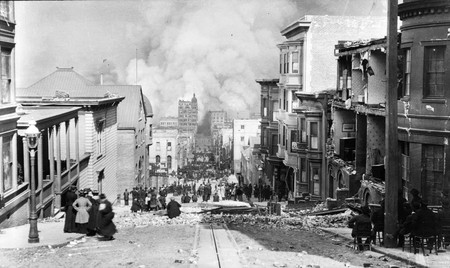 Everything changed following the infamous earthquake in 1906, which reduced most of the Barbary Coast to ash and rubble. Seeing an opportunity, San Francisco’s economic elite spent a fortune to rebuild the district from the ground up, and in doing so, create a new area for entertainment appealing to all San Franciscans. The months and years following the great 1906 Earthquake witnessed the rebirth of the Barbary Coast as Terrific Street. 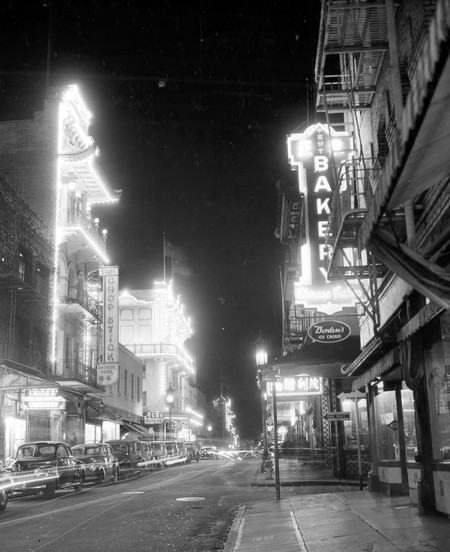 Gone were the scheming criminals and overarching sense of moral decay, which were replaced by gentrified jazz clubs and glamorous dance halls. Deriving its new nickname ‘Terrific Street’ from the quality of the music played in its bars and halls, the rebranded Barbary Coast hosted musicians who would play a vital role in the development of jazz music as an American cultural phenomenon. Sadly, this new era was over almost as soon as it began.

The process that culminated in the Barbary Coast’s final demise has its origins in the year 1911, when San Franciscans elected James Rolph as their new mayor. Supported by his allies amongst the city’s elite, Rolph launched a moral crusade against the Barbary Coast. One of the mayor’s most prominent allies was William Randolph Hearst, who used his media empire to utterly destroy everything the Barbary Coast stood for.

In 1913, resolutions were passed by the city government, which banned women and dancing from any entertainment venue that also served alcohol. Over the next four years, the lights, sounds, and spirit that had flowed through Terrific Street slowly disappeared. The closure of the brothels in 1917 symbolized not only the final death knell of the Coast’s Terrific Street incarnation, but also the final page in the story of the Barbary Coast itself.